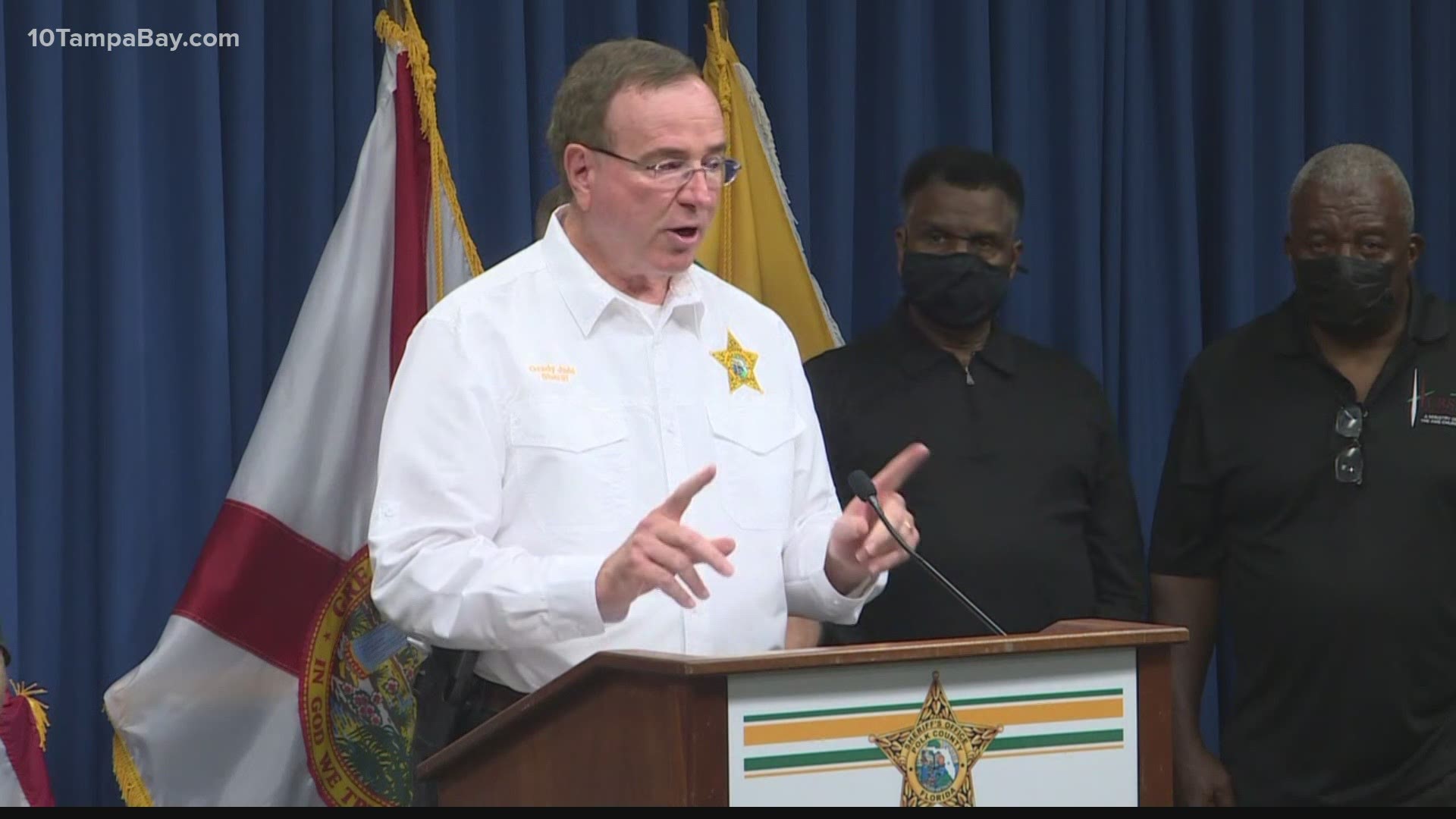 WINTER HAVEN, Fla. — "I am going to die tonight... you are going to have to shoot me." That's what one man told Winter Haven police before they tased and ultimately shot him, Polk County Sheriff Grady Judd said.

During a news conference Sunday afternoon, Judd said it began when a 21-year-old woman called 911 around 10:02 p.m. Saturday after 52-year-old Larry Jenkins fired a gun at the ground.

Judd said the 21-year-old woman told investigators she and her husband went to Jenkins' home on Orchid Springs Drive to pick up her 14-year-old sister. The sheriff said the woman told them her sister said Jenkins had made unwanted sexual advances toward her all day and had exposed himself to her.

The woman reported when she and her husband got to the home, the teen came out the front and Jenkins came out the back and approached the husband. The husband reportedly told investigators Jenkins was drunk and had a gun. Judd said he said Jenkins tried to hand him the gun and asked him to shoot him.

When he refused, Judd said he saw Jenkins point the gun at his own head and said "I'm fixin' to get ready to die." Jenkins then "racked" the gun and fired it at the ground. That's when the man, his wife and the teen all left "out of fear" and the woman called 911.

The sheriff's office said Winter Haven Police Sgt. Joshua Dentel and other officers responded to the 911 call. When he arrived, Sgt. Dentel found Jenkins standing inside the screened-in porch, "smoking a cigarette with his left hand while keeping his right hand concealed in his pocket."

Sheriff Judd said when Sgt. Dentel asked to see Jenkins' hands, he refused and said "I have a gun in my pocket."

Jenkins then left the screened-in porch and stopped just outside the door, his hand still in his pocket, according to the sheriff's office.

At this point, two other officers had joined Sgt. Dentel and also told Jenkins to show his hands, the release said.

The sheriff's office said Jenkins continued to ignore the officers and said "I'm going to die tonight" and "you're going to have to shoot me."

When Jenkins reportedly took the gun out of his pocket, Sgt. Dental fired his gun at him, hitting him several times, according to the sheriff's office.

Jenkins then fell to the ground and dropped the gun, at which point officers performed life-saving measures and called EMS, the sheriff's office said.

Jenkins was taken to the hospital and died.

The Polk County Sheriff's Office and state attorney's office have taken over the shooting investigation. The sheriff's office says the Winter Haven Police Department is conducting its own internal investigation.

Sgt. Dentel, who has been with the department for nine and a half years, has been placed on administrative leave with pay during the investigation, per protocol.

You can watch the full press conference here: