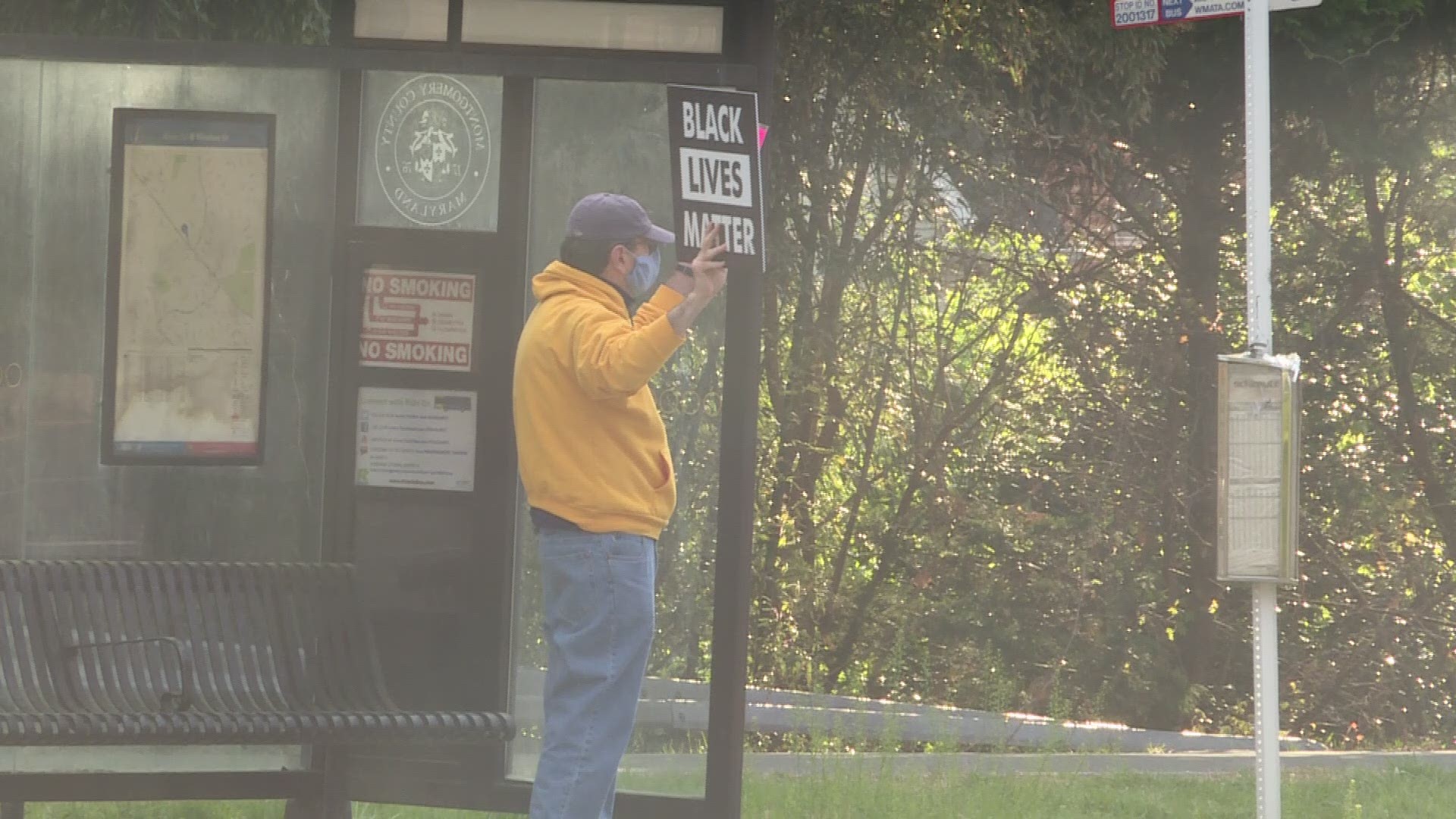 BETHESDA, Md. — For the past six years, members of the River Road Unitarian Universalist Congregation have gathered at the intersection of River Road and Whittier Boulevard every Friday evening for a cause.

Some hold Black Lives Matter signs. Others can hold one of around 80 cards of various colors with specific names on them.

For organizer Jana Kirkman, the motivation to start the gatherings came in 2014 after one of the most highly publicized police shootings ever.

"We started within a week or two after Mike Brown was killed in Ferguson," she said. "It seemed like the burden shouldn’t be on Black people to speak up for their lives. It seemed like white people should be the ones telling problematic white people that things need to change.”

This most recent Friday, many cars honked their horns while some drivers cheered and gave thumbs up to the members standing at the intersection with their signs. The group often receives overwhelming support from the passers-by, but they also occasionally see opponents of the issue.

Kirkman told WUSA9 that two physical altercations have even occurred at the site over the years.

However, she said members would keep coming out to show unity for the cause.

"We all believe that not enough people say and behave as if Black lives matter," said Kirkman, who was joined by her two children for the gathering on Friday. "It is important as a white person that I’m out here witnessing that Black lives matter. I have to stand up and say it so that it gets in the face of white people who are not thinking about that.”

*VIDEO: For the past six years, members of the River Road Unitarian Universalist Congregation have gathered at River Road/Whittier Blvd in Bethesda have gathered *every Friday* to hold #BlackLivesMatter signs and signs with names of people killed by police officers @wusa9 pic.twitter.com/bDnRtcAUUM

Jon Kerner, another member of the River Road Unitarian Universalist Congregation, is one of the regulars who stands at the intersection every Friday evening.

For him, attending the 50th-anniversary ceremony of the Selma marches in Alabama in 2015 led to wanting to continue the calls for change back home.

"It’s kind of a semi-spiritual thing," he said. "It makes me feel like I’m closer to where I want to be in terms of civil rights.”

Kerner held a Black Lives Matter sign and one for Tamir Rice, a 12-year-old who died in a Cleveland police shooting in 2014, on Friday.

Moving forward, he said it was important for white people to show solidarity with others for the issue.

Friday's gathering came the same week after a guilty verdict was reached by a jury against former Minneapolis police officer Derek Chauvin, who was convicted in the murder of George Floyd.

Kerner said the case, and many others showed the importance for the group to keep holding their weekly gatherings.

"It has a special meaning tonight but I’ll be out here next Friday and every Friday that I’m around," he said.

The weekly "Black Lives Matter Vigil" with the River Road Unitarian Universalist Congregation is held every Friday from 6:30-7:30 pm at the intersection of River Road and Whittier Boulevard.

RELATED: How to talk to kids about the Chauvin trial verdict, recent violence