There are several events throughout Florida for Orlando United Day on Monday and during the course of the week. 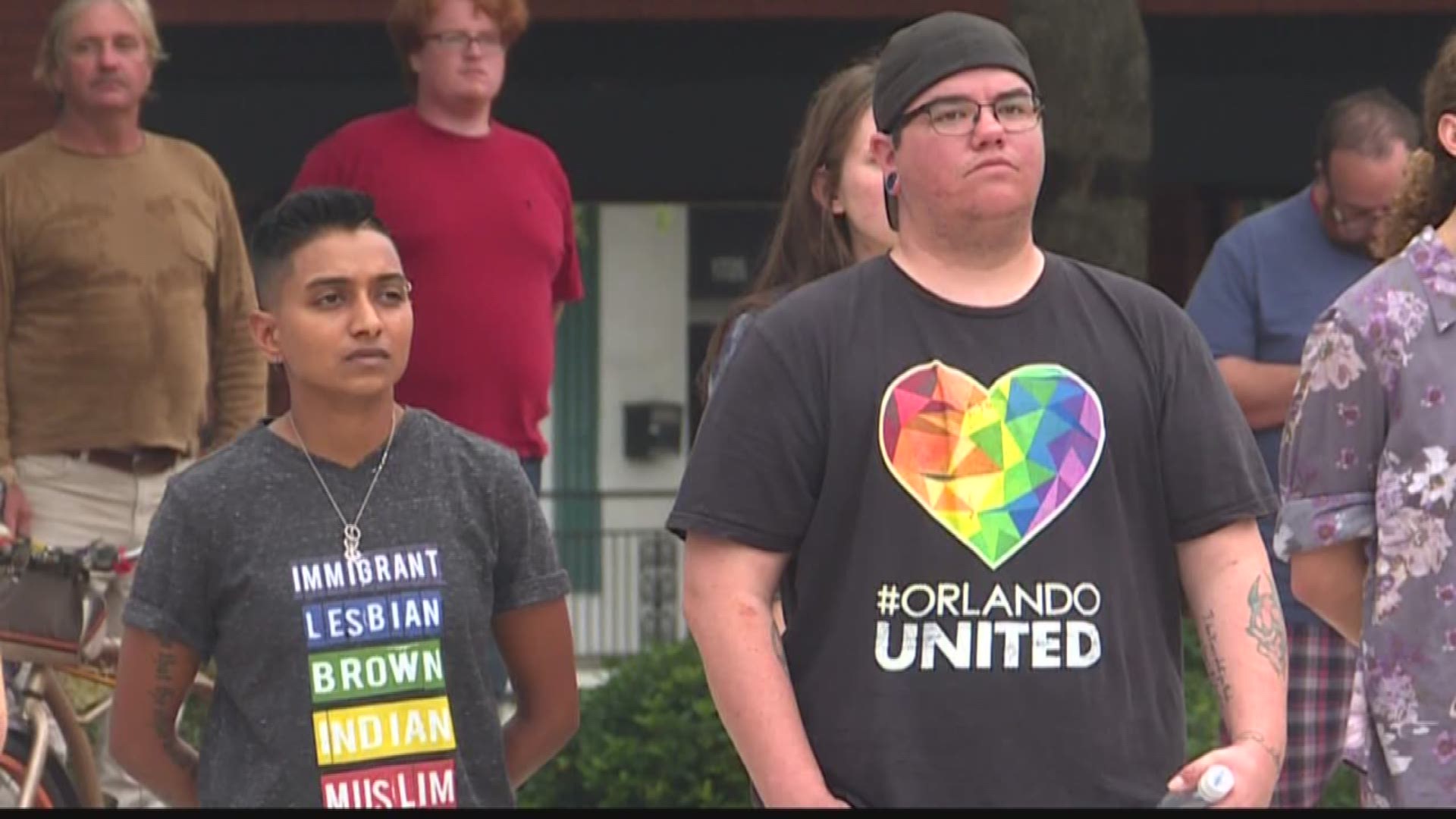 Monday marks one year since the deadliest shooting in modern U.S. history.

Forty-nine people were killed and dozens injured in the Pulse nightclub shooting on June 12, 2016.

There are several events throughout Florida for Orlando United Day on Monday and during the course of the week.

Editor's Note: Eastern Time is used throughout this story.

Anyone wanting to donate money to help the Pulse victims can donate to the Contigo Fund or Central Florida Foundation. TheonePULSE Foundation is also accepting donations to turn the Pulse nightclub into a museum, and for scholarships for those impacted by the attack.

· Brooklyn Water Bagel’s Winter Park and Lake Mary store locations will serve special, limited-time only, rainbow bagels with 100% of the proceeds from rainbow bagel sales to benefit the Better Together Fund at Central Florida Foundation. Customers who wish to support the effort may purchase the rainbow bagels individually or even take home a baker’s dozen.

· June’s FilmSlap lineup at the Enzian Theater will feature the work of LGBTQ and LatinX filmmakers in addition to films highlighting what was felt after Pulse and how the Central Florida community has remained united for equality and against hate. Tickets are $8.

· Gather with the community at the Orlando Public Library for an afternoon of remembrance featuring poets and a performance of “World of Love” by local band Sugar City.

A Vigil in Remembrance of Pulse

· This special service at the Cathedral Church of Saint Luke will include scripture and prayer, a candlelight vigil and performances by The Chancel Choir from First United Methodist Church, the Cathedral Choir, Orlando Gay Chorus and the Orlando Fire Department Bagpipe Band.

· BASE Orlando will paint 49 bodies to create a human rainbow, with each person representing a life lost at The Other Bar.

· The Inspirational Orlando Mural will be on display at Pulse Nightclub until 2 p.m. The mural will then be moved to Lake Eola for Orlando United Day events. Families of the victims, survivors and first responders will be adding their handprints to the mural. The virtual reality app that works in conjunction with the mural will be available for free on June 12.

The Extended One Orlando Collection and Digital Gallery

· The expanded One Orlando Collection and Digital Gallery includes images of individual items collected at the Pulse memorial sites in their current state in preservation. Curated pieces from the One Orlando Collection will feature community artwork and international support that was received following the tragedy. Admission is free and the gallery will be at the Orange County History Center. Display available for viewing until June 17.

1 / 1
Adam Berry
BERLIN, GERMANY - JUNE 18: Mourners hold photographs of victims of a shooting at a gay nightclub in Orlando, Florida nearly a week earlier, during a vigil in front of the United States embassy for them on June 18, 2016 in Berlin, Germany. Fifty people were killed and at least as many injured during a Latin music event at the Pulse club in the worst terror attack in the U.S. since 9/11. The American-born gunman had pledged allegiance to ISIS, though officials have yet to find conclusive evidence of his having any direct connection with foreign extremists. The incident has added fuel to the ongoing debate about gun control in the country. (Photo by Adam Berry/Getty Images)

Unveiling of the Sea-to-Sea Flag

· At the direction and request of Orange County Mayor Teresa Jacobs, Section 93 of the legendary Sea-to-Sea Rainbow Flag was originally displayed on June 17, 2016 at the Orange County Administration Building, in tribute to the lives taken at Pulse and in support of freedom lovers worldwide. The Sea-to-Sea Flag, which is also known as “The Sacred Cloth,” has become a globally-recognized symbol of the LGBTQ movement, symbolizing acceptance, understanding, education, solidarity and inclusion.

· Throughout the day, members of the community are welcome to visit Pulse Nightclub to honor the legacies of the 49 victims, their families and the survivors. There will be a ceremony including various community speakers, reflective prayers, a reading of the 49 names, a display of 49 wreaths and music by Violectric. The Inspiration Orlando mural, our Angel Force, Hang-a-Heart, Stars of Hope and comfort dogs will be present.

Service of Remembrance and Reconciliation

· Gather at the St. Stephen Lutheran Church, Longwood for a service of remembrance with prayer, candles and communion. The bells will chime 49 times in honor of the 49 lives lost.

· Paint a river rock with a message or symbol of love and kindness at the Winter Garden Branch Library to honor Orlando United Day.

· Local library branches invite you to write an encouraging and uplifting note to a stranger. The notes will be placed around the city or sent to someone in need of a boost. No registration required.

· 7 p.m.’Orlando Mayor Buddy Dyer, Orange County Mayor Teresa Jacobs, Orlando Commissioner Patty Sheehan and other community leaders and elected officials will hold a one-year remembrance ceremony at Lake Eola Park. The ceremony will include remarks by community leaders, musical performances by Olga Tanon and Sisaundra Lewis along with a memorial reading of the 49 names of those who were taken during the tragedy.

Painting with a Twist Pulse Memorial/Fundraiser for onePULSE Foundation

· Sip, paint a commemorative piece and relax at Painting with a Twist in Winter Park. The evening’s event will also serve as a memorial and fundraiser for the onePULSE Foundation. The cost is $45 per person.

Moments of Hope and Healing

· The community is invited to Pulse Nightclub to conclude the evening with a series of prayer, live music, inspirational dance and reflection.

Love Ya!: A Celebration of Diverse Young Adult Literature

· Reflect on the Pulse tragedy and its impact on our community while attending this moderated panel discussion at the Orlando Public Library featuring diverse young adult authors. Authors include Alex Sanchez, Shaun David Hutchinson and Jenny Torres Sanchez, moderated by Lauren Gibaldi. Ages 13 and up.

· Paint a piece that communicates what the past year has meant to you personally and to the community at the Alafaya Branch Library. Supplies will be provided. Completed pieces will be displayed.

L.O.V.E.: Lessons on Vulnerability and Empathy

· This discussion and craft will be focused on L.O.V.E.: Lessons on Vulnerability and Empathy. Ages 18 and up.

One City - One Pulse: An Artistic Tribute

· View the work of local artists created to inspire hope and healing. The gallery will be on display at City Arts Factory and is open to the public during normal gallery hours.

Pulse - One Year Later - In Your Own Words

· Come to the Melrose Center Video Studio and share your personal story of how the Pulse tragedy affected you and the community. Stories will be uploaded to the library’s Orlando Memory website.

· This art show, on display July at the Orlando Public Library, features art addressing each artist's’ feelings on what has changed since June 12, 2016. The Orlando Gay Chorus and Latin guitar/percussionists Antone Affronti and Adalberto Bravo will perform during the opening event. Participants will also be invited to record a video addressing how they feel the community has changed in the past year.