“Many deaths could have been prevented by planning, by not allowing the genocide of abandonment to happen, we want those stories to be told,” says Lyn. 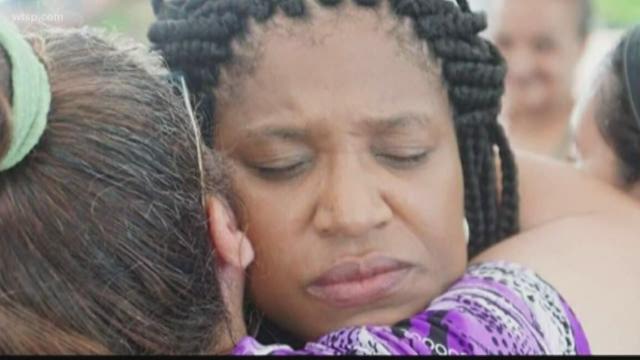 TAMPA, FL - Dezeray Lyn has dedicated her life to helping those in need. She part of a disaster relief network 'Mutual Aid Disaster Relief.'

Recently, they provided 120 thousand pounds of food and water to people in Puerto Rico. Areas, where they say, hadn't been helped at all after Hurricane Maria.

“Many deaths could have been prevented by planning, by not allowing the genocide of abandonment to happen, we want those stories to be told,” says Lyn.

While distributing water, some members experienced people crying. They had not seen clean water in days.

“For this woman, who is bringing life into this world to weep when we gave her water means we're doing something wrong as humans,” says Donna Davis, a member of the organization.

But the want to help those in need also put these relief workers in danger.

While staying at a church on the Island, the group tells us, they noticed police vehicles and SWAT team members surrounding the building. They had just returned from a full day’s work of helping people in a small village.

These are pictures of that night.

“Eventually entered the building and frantically approached the people inside of the building at gunpoint and telling us to come outside and show our hands,” says Lyn.

Dezeray explains police received a call that the group was engaging in "kidnapping."

They documented their experience in a blog.

"We walk out the door and they're yelling tu manos! tu manos! Tu manos! And we knew not to put our hands down,” says Davis.

The group ignored the government's rules and went to towns deemed unsafe to provide food and water to people.

They did that because they say many people in those areas aren't getting the help the desperately need.

“Knowing that I was on a mission to help my fellow Americans and something as simple as standing with my hands up and having my phone ring and reaching for that phone, could of meant that I could have come home to my family in a body bag, was an eye-opener,” says David.

Aside from experiencing something so scary, this group kept fighting and continued to distribute goods for the remainder of their trip.

The group says for those going to Puerto Rico, to not only be aware of your surroundings but also make connections ahead of time with disaster relief groups already on the island.

They will be going back to Puerto Rico soon. They're focusing their relief efforts on villages with little help.