The owner of Demi’s Noodle House in Palmetto is promising the food is 100 percent safe after problems on a health inspection. 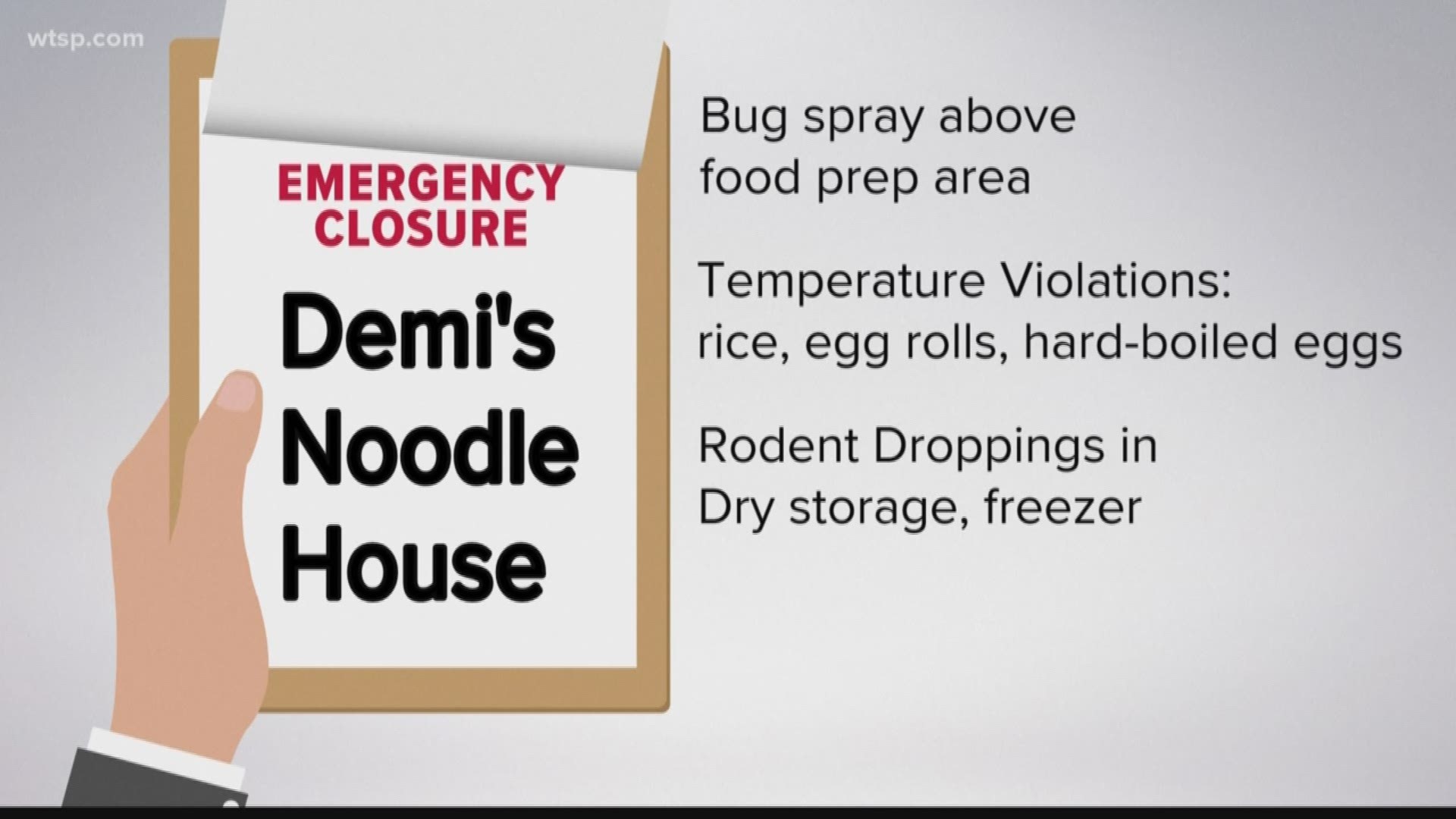 PALMETTO, Fla. — The owner of Demi’s Noodle House is promising she can do better after state health inspectors ordered the restaurant to temporarily close due to health code violations last week.

Demi’s Noodle House on 10th Street West in Palmetto was cleared by the state to reopen shortly after the closure.

The restaurant was written up for 18 violations.  The health inspector wrote up the restaurant for having bug spray stored directly above food prep areas and temperature violations on rice, egg rolls and hard-boiled eggs.

The inspector also documented rodent droppings. They said there were close to 100 droppings around the dry storage area and by the reach in freezer.

“I was planning on coming on Friday and somebody told me they were closed,” customer Mary Lawrence said. She said she eats at Demi’s Noodle House two to three times per week.

The restaurant was cleared to reopen late last week, so 10News stopped in Wednesday to check on conditions inside the kitchen.

Owner Demi Deange immediately offered to take us on a tour of her cleaned up the kitchen and told 10News she was shocked about the restaurant’s first emergency closure.

“I don’t think I do anything wrong,” Deange said. “I always clean up and always organize my stuff.”

On our tour of the kitchen, we found a few remaining issues, like raw meat stored directly over ready-to-eat food in this reach in freezer. We also spotted more bug spray above a food prep area and boxes of pain reliever in a refrigerator stored with customer food.

But when it came to all those rodent droppings, after searching high and low, we found zero evidence of any remaining rodents.

When asked if she felt like her food was safe to eat Deange responded: “100 percent.”

“I believe she is the type of person who is true to her word on that,” Lawrence said. Lawrence said she refuses to let one bad inspection scare her away from eating at her favorite lunch spot.  “Oh no. I’ll be back.”

Demi’s Noodle House had on average just two violations per visit on their previous health inspections.

You can check out their entire inspection history here.