Multiple restaurants shut down with roaches and rodents in kitchen

A health inspector reported finding a live roach in a container of flour at one upscale Sarasota restaurant. 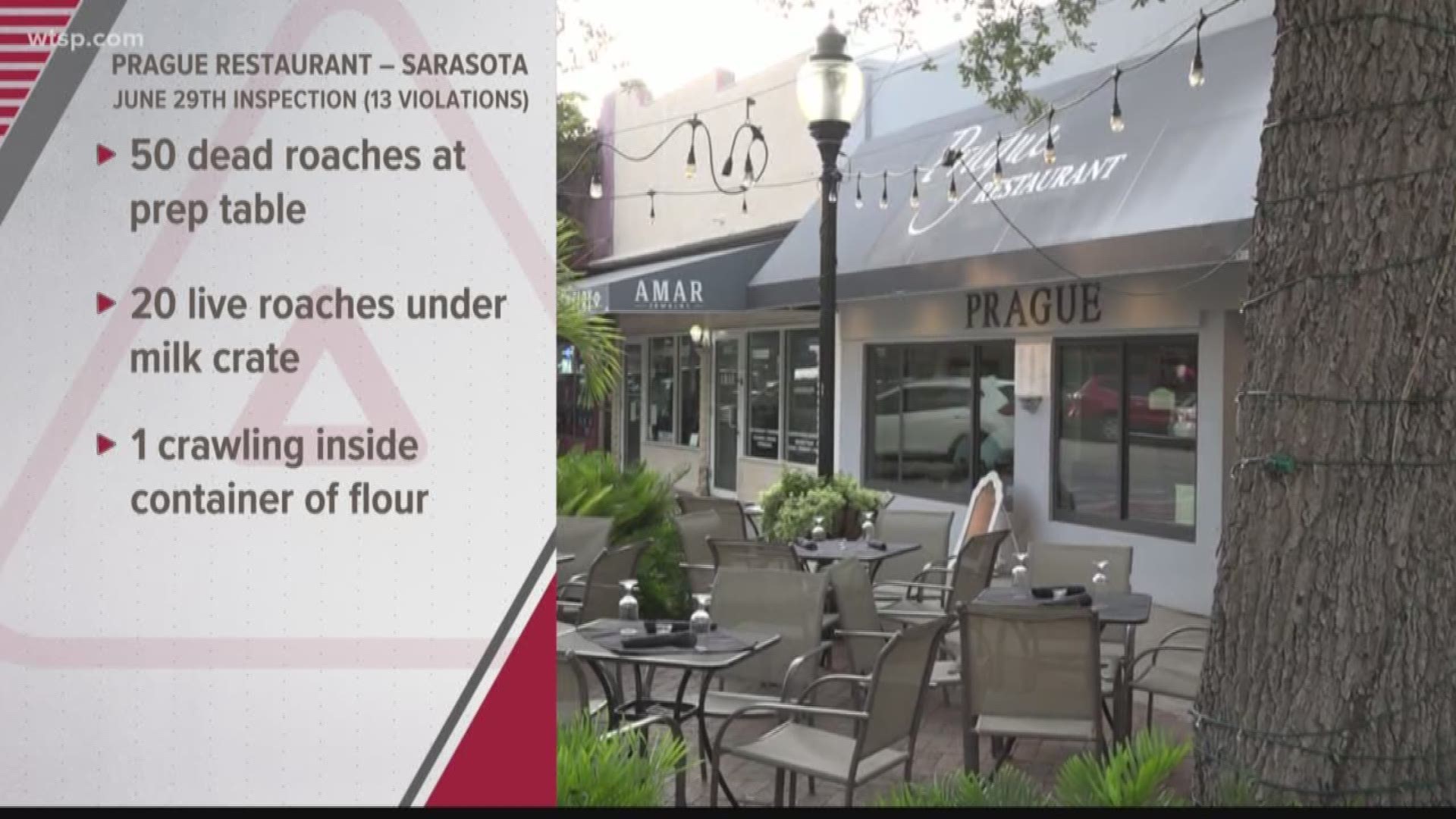 SARASOTA, Fla. — It was another busy week for restaurant health inspectors uncovering big problems inside Bay area kitchens. The state temporarily shut down a number of restaurants after discovering some creepy crawly critters scampering around the kitchen.

In at least one case, a live cockroach was found in a container of food.

We begin on Main Street in downtown Sarasota.  Prague Restaurant is an upscale, white tablecloth, European-themed establishment serving up a variety of schnitzels and even escargot.

Health inspectors visited the restaurant on Saturday, writing up 13 violations and ordering a temporary emergency closure after discovering insect activity inside the kitchen.

“They found some roaches,” said owner Tomas Stiviro, who insisted the roaches had nothing to do with his kitchen being dirty.  Instead, he says they were coming from other parts of the building and were possibly stirred up during some past construction.

“I was aware of the roaches and we tried to fix the problem a few months ago.  The pest control company didn’t work exactly how I wanted,” said Stivers, who confirmed he’s since hired a new company.

The change came after the health inspector uncovered 50 dead roaches at the prep table, 20 live roaches under a milk crate, inside the seal of the reach-in cooler and even one crawling around inside a container of flour.  The health inspection report indicates that roach was killed and the flour was ordered to be thrown out.

The next restaurant shut down was in Lakeland and is one of the area’s original sub shops, Subs and Such on South Florida Avenue.  The health inspector went in June 25th and reported finding all kinds of problems totaling up 26 violations.

The issues included ants under the soda machine and walking around equipment, live roaches under the bar counter and by the back door with roach excrement on a shelf.  The inspector reported finding rodent droppings under the refrigerators and by the to-go lids, along with a dead rodent stuck to a glue trap.   The inspector even reported locating a dead lizard on the ground under the coffee machine.

When we stopped by Thursday, the restaurant was closed, but the establishment has since been cleared by the state to reopen.

And finally, in Pinellas County, the Largo Family Restaurant on North Missouri Avenue was temporarily shut down following their inspection on June 26th.   We’ve previously featured this same restaurant as a Restaurant Red Alert and now they’ve been shut down again with rodent droppings on the floor near the dish room.

The inspector also wrote up temperature and handwashing violations and employees walking through wastewater backing up into the kitchen.

This restaurant remained closed for much of the week to undergo renovations and when we stopped by, people working at the restaurant had nothing to say about all the violations.