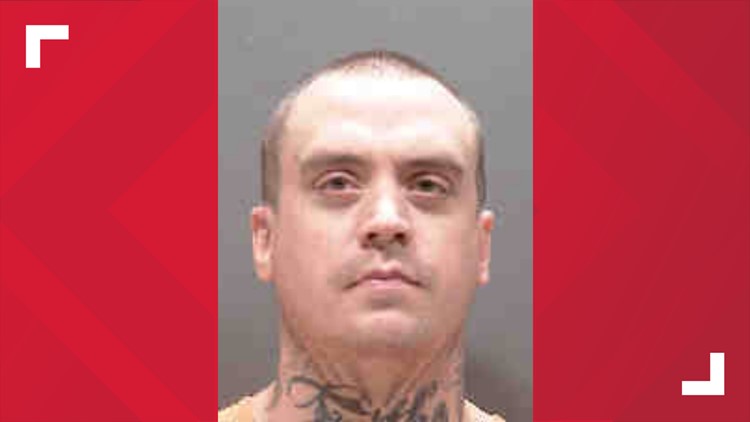 SARASOTA, Fla. — A 32-year-old man is in jail accused of multiple robberies and arson in Sarasota county.

According to the Sarasota Sheriff's Office, John Charles Hicks kicked off a string of crimes on July 14 when he robbed a construction site, stealing $21,300 worth of equipment.

Court records show a Kubota side-by-side vehicle that was reported stolen from the site was found on Jul. 18 at a West Oak Street home listed as Hicks' address.

While the investigation continued, a man matching Hicks' description down to his "distinctive" hand tattoo was caught on multiple surveillance videos smashing glass doors, entering buildings, and stealing things.

Deputies say he was seen coming and going in a white 4-door Mercedes – and in some cases, the person in the surveillance videos set fires.

On Aug. 5, deputies say that a man matching Hick's description threw a rock through a glass entry door at a Marathon gas station but found the register empty and left.

On Aug. 15, an arrest warrant says that Hicks again smashed the glass doors to an Orion Fuels gas station on Stickney Point Road and after breaking into a Discount Liquors Store on North Tamiami Trail. Hicks is accused of stealing a cash box and a roll of scratch-off tickets from the gas station before spraying a liquid on the register counter and floor – and igniting it.

That same night, only a couple of hours earlier, deputies responded to a call of a burglary at the liquor store, but they found only a smashed glass rear door. Nothing was stolen, according to an arrest warrant.

On Aug. 18, the Sarasota sheriff's office issued warrants for Hicks' arrest. Deputies say they had information that Hicks was in Manatee County, so they requested the help of their neighboring sheriff's office.

MCSO caught up with Hicks as he was driving West on State Rd 70 E, the arrest report shows.

According to MCSO, Hicks didn't stop when deputies turned on their emergency lights. Instead, deputies say, he went faster.

A chase reached 110 miles per hour, as deputies say Hicks ran a stoplight at the intersection where SR 70 meets 30th Street, causing a car to swerve to avoid getting hit. The chase lasted about three minutes, according to deputies, until Hicks crashed into a wooded area, got out and started running.

Manatee deputies sent a K9 deputy into the woods after Hicks and the dog sniffed him out hiding in "thigh-deep" water under a large tree that had fallen over. according to the report.

Hicks was treated for bite wounds on his face and arm from the K9 and then booked into the Manatee County jail. On Oct. 17, Hicks was found guilty of fleeing to elude law enforcement in Manatee County, resisting arrest and having no valid driver's license and made to serve 90 days in county jail.

Hicks was transferred to Sarasota and is now in the custody of the sheriff's office – on four counts of burglary, two counts of property damage and criminal mischief, two counts of first-degree arson with people present, one count of larceny grand theft from a construction site and one count of petit theft.

Arrest reports say that Hicks admitted to the crimes, but in court on Nov. 20, Hicks pleaded not guilty to those charges.

RELATED: Florida woman accused of setting chair on fire because she thought man was cheating