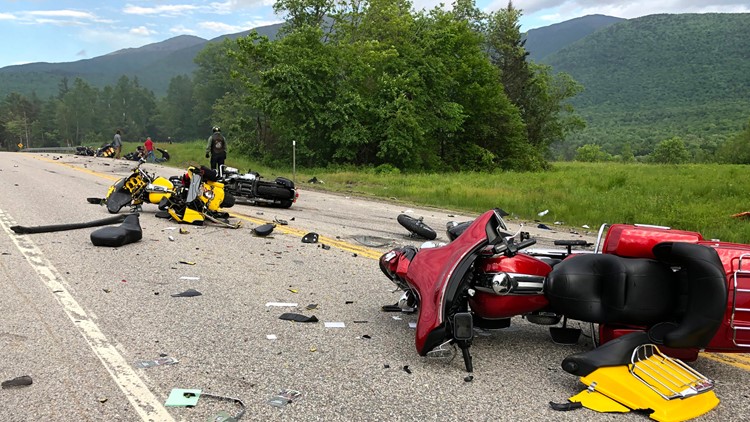 Some of the worst crashes in New England since 2000

The news shocked people around New England, as Route 2 in Randolph was closed for most of the night, while police and state officials conducted an investigation.

These are other notable crashes in that time that left the public deeply saddened and in shock.

11 people were ejected from a van in Attleboro, Mass. after it rolled over on I-95, according to NBC Boston.

As a result of the crash, two people died, and the other occupants were injured.

Massachusetts State Police told NBC Boston that the van was part of a tour group, catering to the Polish-American community. The people on the tour were believed to have been picked up in Philadelphia, New Jersey, and New York.

NBC Boston said the victims were both adult males.

A crash in Berwick a little over a year ago left four people dead and four others injured.

The incident occurred on Route 4 around 1:30 p.m. when a man from Buxton lost control of his car while trying to make an improper pass. He hit a Ford Explorer, driven by a Massachusetts woman.

Three people inside of the passing car, including a 7-year-old boy, died at the scene. A 73-year-old woman inside of the Ford died later at the hospital.

The three other individuals in the Ford were taken to local hospitals with non-life-threatening injuries.

Two motorcycle riders taking part in the United Bikers of Maine Toy Run in September 2017 were killed when they collided with a pick-up truck.

The accident happened on I-95 in Augusta, as the four motorcycles were bound for the Augusta Civic Center.

Four other people were injured and taken to a nearby hospital.

The United Bikers of Maine announced in April 2019 that the Toy Run will not be happening this year. The NTSB said more could have been done to mitigate safety risks.

This event had been ongoing for 40 years, and as many as three-thousand riders would participate.

NECN reported that the accident happened early on a Monday morning when when the sole occupant of the wrong-way vehicle crashed into another vehicle, which burst into flames.

RELATED: 5 Killed in Wrong-Way Crash on Route 495 in Middleboro, Mass.

The four people inside of the car that caught on fire were killed. They were all male college students. The wrong-way driver (a 31-year-old woman) was also killed.

The lives of five high school students were claimed in Vermont following a wrong-way crash on I-89 in Williston.

NECN said the teenagers died at the scene after the wrong-way driver crashed into them, setting the car on fire and pushing it into the median.

The wrong-way driver then tried to steal a police cruiser on scene, taking off in the wrong direction again and hitting seven other vehicles.

The driver, Steven D. Bourgoin, was found guilty of second-degree murder in May 2019.

A 24-year-old was killed and five others were injured on Route 161 in Stockholm when a teenager failed to stop at a four-way intersection.

The victim was driving the car that was t-boned by the young 19-year-old female driver. Also in the victim's car were two other passengers, including a 2-year-old child.

The driver who failed to stop and her passenger were taken to a medical center to be treated.

A head-on crash between two SUVs in Enfield killed one person and sent six others to the hospital.

The Portland Press Herald said one of the SUVs crossed the center line at the intersection of Route 2 and Mohawk Road. It crashed into the other SUV as a result.

The victim was a woman, who was pronounced dead on scene. The other victims were taken to the hospital. Some were flown by LifeFlight.

A 24-year-old driving with a suspended license was killed along with two others when their pick-up truck crashed into a tree.

At the time, the group was reportedly feeling a sheriff's deputy.

The driver, Joshua Plummer, was connected to a string of infractions, dating back to 2000. That year, he had hit a group of three pedestrians in Naples, killing one of them.

RELATED: Driver In Triple Fatal Crash Had Been Involved In Earlier Fatality

Seven people, including women and children, were killed in a crash on I-95 in Carmel.

Three of the victims were under the age of 10.

All of the victims were reportedly in a Ford Explorer headed north and driving very fast in the breakdown lane. The SUV was passing two vehicles when it hit one of the cars, flew into the air, slammed into trees, and came to rest on its roof.

Traffic was backed up for at least 10 miles.

14 migrant workers died after a van they were riding in skidded off a bridge along the Allagash Wilderness Wildway.

One man reportedly survived the crash.

Four of the victims were from Guatemala, and the other 10 were from Honduras.

At the time, the crash was considered to be the worst traffic accident ever in Maine.

Four people, including three young children, were killed when a station wagon pulled into the path of an oncoming logging truck.

The crash took place in the Somerset County town of Cornville. The driver, Stacey Corson of Athens, who was 25 years old at the time, was reportedly driving without a license.