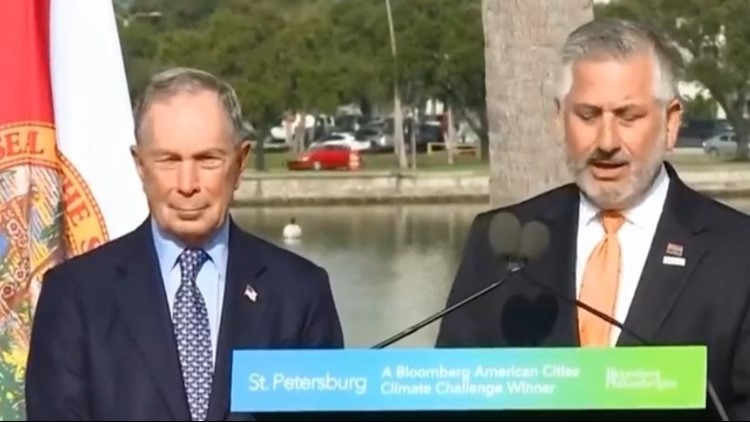 ST. PETERSBURG, Fla. -- The city of St. Petersburg has won the Bloomberg American Cities Climate Challenge and $2.5 million in resources to help combat climate change at the local level.

“As a coastal city, the effects of climate change are more apparent than ever to the residents of St. Petersburg," Kriseman said. “Through the American Cities Climate Challenge, we’re excited to expand our efforts to achieve our near-term emissions goals and make our city as healthy, safe, and climate-resilient as possible.”

Bloomberg, also the head of Bloomberg Philanthropies which formed the climate challenge with an initial investment of $70 million, said mayors "can't ignore the risks" that climate change poses because their "constituents feel the effects" at the local level. They don't always call Congress first with their concerns, "they call their mayor."

“With Washington asleep at the wheel, cities like St. Petersburg – that are taking bold action on climate change – are more important than ever to encourage even more bottom-up progress,” Bloomberg said. “The response to our Climate Challenge has been so positive – from mayors around the country – that we’ve decided to select five additional winning cities. Tackling climate change goes hand in hand with improving public health and creating jobs, and it’s great to see cities leading where Washington won’t.”

Bloomberg said his philanthropic arm and its partners will work with St. Petersburg to implement climate plans like "the first utility community solar program for energy equity" and expand its residential solar co-op program.

At the beginning of the challenge, Bloomberg invited 100 of the nation's largest cities to come up with new ideas for cutting carbon emissions. Because of the number of plans being pitched, he said the organization is adding five more winning cities after St. Petersburg.

Before the news conference, Kriseman and Bloomberg met at Kahwa Coffee in downtown St. Petersburg to discuss the city's climate efforts. The two are also set to meet with Moms Demand Action, a gun reform advocacy group. Bloomberg, who's been eyed for a potential 2020 presidential run, has been critical of the Trump administration's actions and comments on climate change.

During a recent Meet the Press interview, Bloomberg said climate change should be a top issue for 2020 candidates.

Kriseman said residents can learn more about the city's plans to combat climate change and its status as a Climate Challenge winner during an open house from 3:30-6:30 p.m. Thursday at City Hall.