A middle school student is charged with assaulting a school employee, an automatic felony under Florida law. 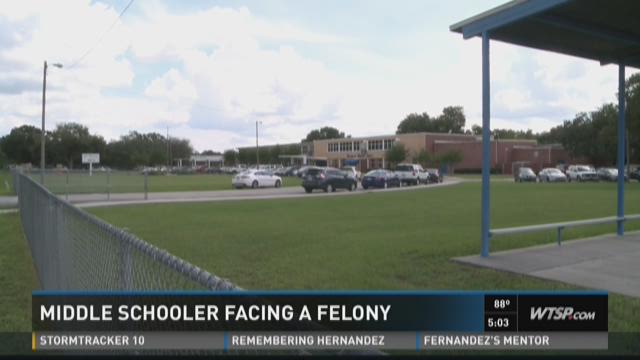 WINTER HAVEN, Fla. (WTSP) -- A 15-year-old boy is accused of a felony after his teacher tried to discipline him. It happened last week at Westwood Middle School in Winter Haven.

According to the affidavit, the middle school student was acting up in class. When the teacher tried to discipline him, he “pushed past her with his shoulder bumping her right shoulder at the same time picking up her right hand pushing her right hand back hard."

The teacher reported it to administrators the same day and the school resource deputy the following day. Now, the student is charged with assaulting a school employee, an automatic felony under Florida law.

“We're not in the business of trying to criminalize youth,” Polk County Sheriff’s office spokesperson Carrie Horstman said. “We don't want to see them in jail, but when you have a student who might have a history where he has a little bit of violence, we have to send the message to him and to other students, you can't put your hands on teachers or school staff."

Over the phone, the teacher’s husband said her lawyer doesn't want them to talk to the media. He did say she’s hurt, but she's back in the classroom.

The student is not. He told 10News WTSP he’s suspended and might get expelled. He also said he’s gotten in trouble at school before for fighting.

Even though he is facing a felony, the Horstman said that could change if the student goes through the teenage court system.

“Either it can be downgraded to a misdemeanor or they can go, or they can be diverted to a program where it's not on their record at all,” she said.

The hope in those cases is it'll teach the student a lesson, but the felony won't be on their record for the rest of their life.