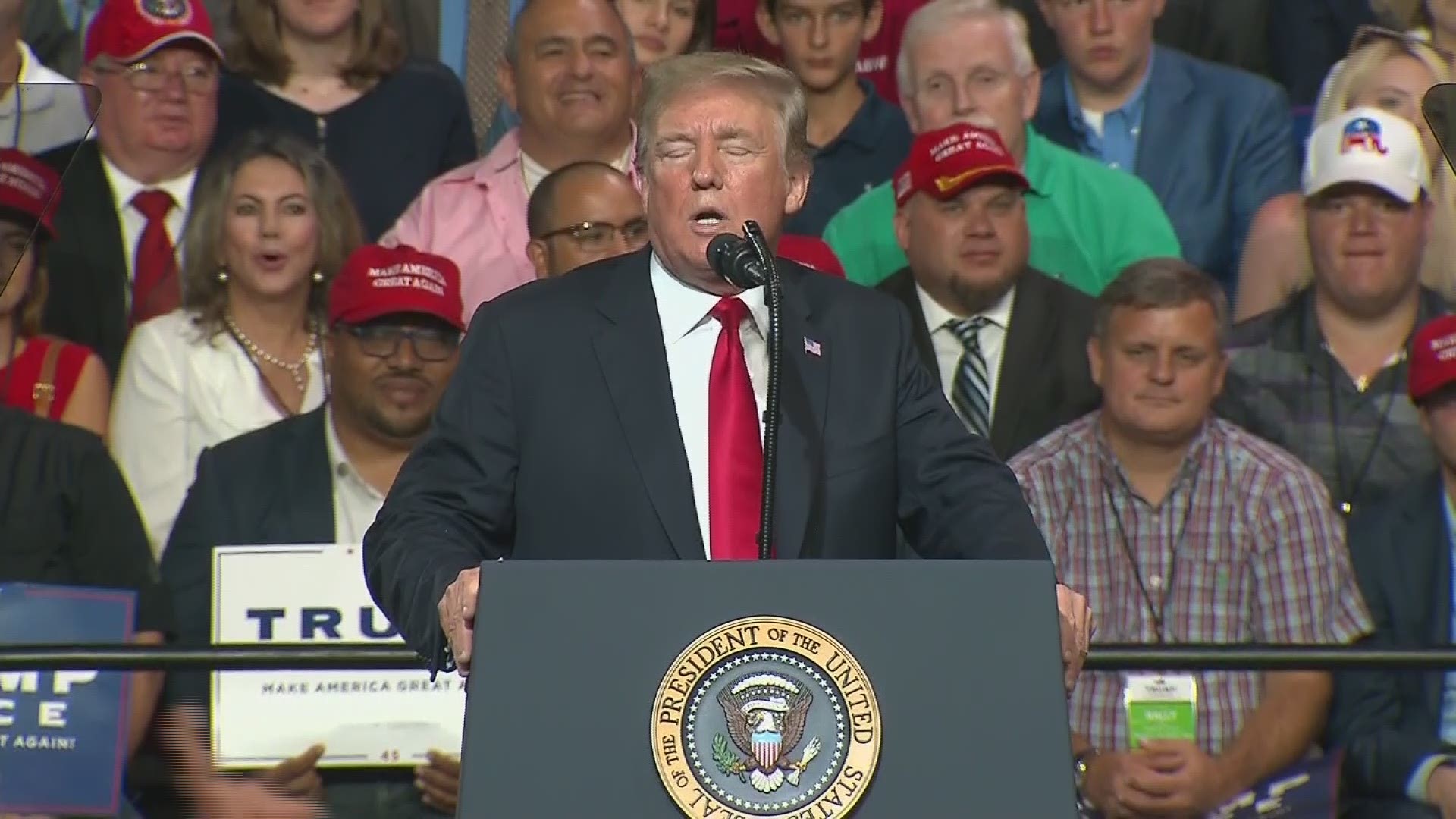 TAMPA, Fla. - President Donald Trump wrapped up his visit to Tampa with a rally that drew thousands and a hearty endorsement for Republican Rep. Ron DeSantis as he wades into Florida's competitive gubernatorial primary.

The rally was a show of force for DeSantis, who faces off against state Agriculture Commissioner Adam Putnam in the state's Aug. 28 Republican primary.

1 / 84
President Donald Trump speaks during his rally at the Florida State Fairgrounds on July 31, 2018.

Trump is praising DeSantis as "a tough, brilliant cookie" and predicts: "He's going to be your next governor."

DeSantis also made his pitch to the crowd and thanked Trump for his leadership.

During his first stop at Tampa Bay Technical High School, Trump signed a bill that gives money to students seeking a vocational education.

Trump told students and faculty that there has never been a better time to develop new skills or get hired for a new job.

Trump is pointing to strong economic growth and low unemployment at the event with his daughter Ivanka Trump, Florida Gov. Rick Scott and several other Florida leaders.

Trump then held a brief signing ceremony for a technical education law he signed earlier in the day at the White House. He's presenting a copy of the law to the school.

It's his first of two stops during a day trip to Florida.

Trump will then head to a rally at the Florida State Fairgrounds to support Rep. Ron DeSantis, who faces off against state Agriculture Commissioner Adam Putnam in the state's Aug. 28 Republican primary for governor.

Some more of the @realDonaldTrump supporters out at the Florida State Fairgrounds tonight #sendto10 pic.twitter.com/ZQYzvsJDw3

Adorable twins at 71 - Cora Frontin and Nora Kuehn from Ocala - making the trip to see @realDonaldTrump in #Tampa pic.twitter.com/0gBGYcltIl

I give @CNN's Jim @Acosta a ton of credit. Dude has been getting HAMMERED with "CNN sucks" chants & people calling him a traitor -- he's been kind & going out of his way to talk with lots of people. Very classy.#TrumpRally #MAGA #CNN #FakeNews #FakeNewsMedia pic.twitter.com/ybNEpluAot

10News is covering Trump's visit to Tampa. Follow our coverage on-air, online and on our mobile news app.

Reporting from the Associated Press contributed to this report.