Many protests over the weekend started peacefully, but some turned violent in Tampa and St. Petersburg. 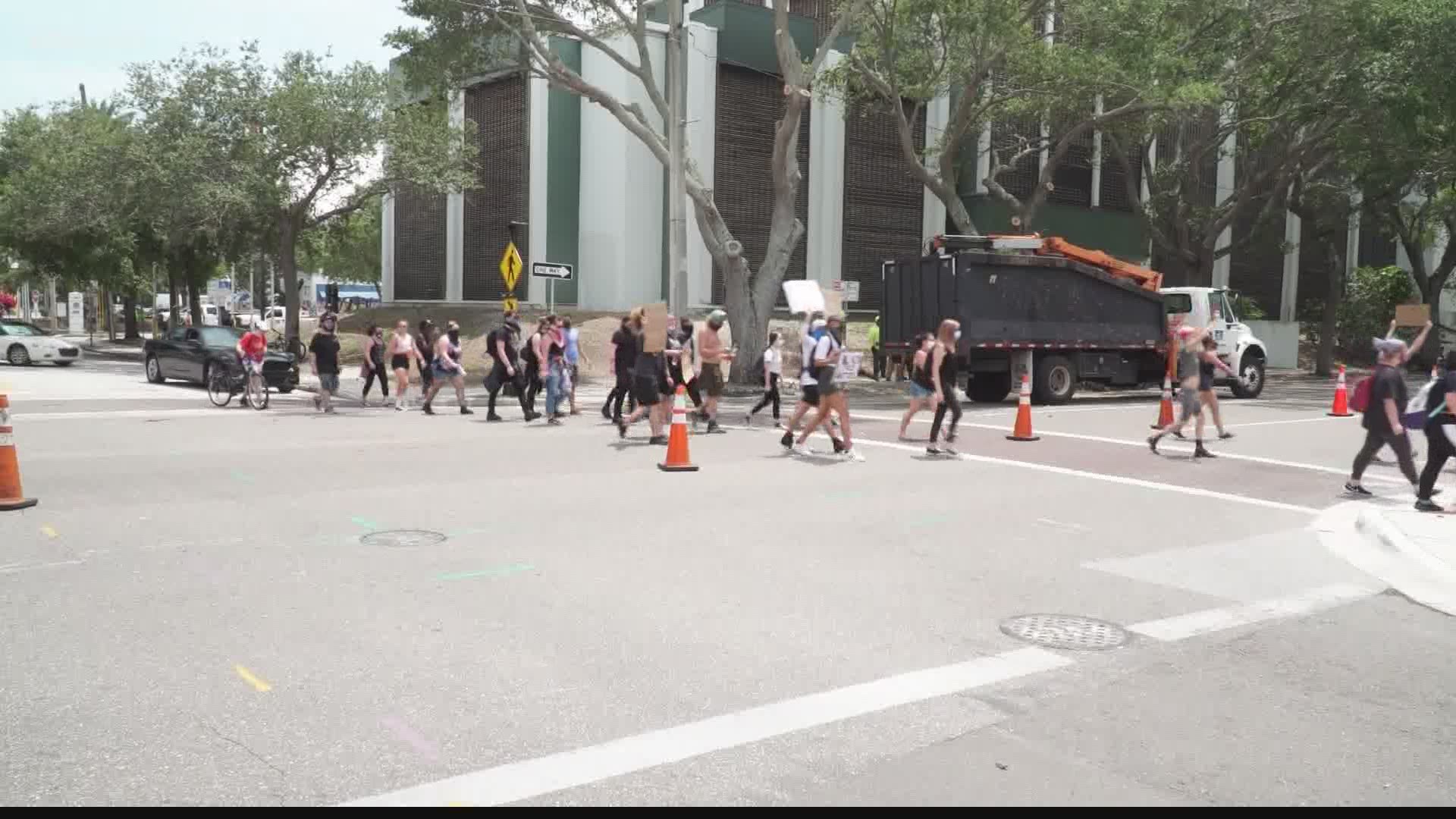 ST. PETERSBURG, Fla. — Largely peaceful protests and gatherings wrapped up late Sunday night around Tampa Bay in response to police brutality and the death of George Floyd in Minneapolis.

Images during the day contrast with those from Saturday evening into the nighttime hours, when protests -- many of which started peacefully -- turned violent in Tampa. People were seen looting businesses and throwing objects near the Tampa Police Department substation near N. 30th Street and E. Busch Boulevard.

At night, law enforcement and fire rescue responded to even more reports of fire, looting and clashes in the area of University Mall.

In Polk County, a local state of emergency and an overnight curfew was enacted. Sheriff Grady Judd cited reports of injuries to law enforcement officers and citizens in Lakeland following a Sunday afternoon protest. The curfew lifted at 5 a.m. but was enacted again at 8 p.m. Monday.

In St. Petersburg, police say some people threw rocks and bottles at the department building. Officers deployed smoke bombs to get some of them to disperse.

Fourteen people were arrested late Sunday night after police said people tore water meter covers off and threw them at officers, ending a day when most protesters were peaceful. Until about 10 p.m., scenes at the police station and on Beach Drive were calm.

10 Tampa Bay is committed to covering the community conversation, with reports from where protests are ongoing.

Audience discretion is advised with some of the following videos and images.

8:34 p.m.: Yvette Lewis, the president of the Hillsborough NAACP, said the people have a right to protest. President Donald Trump earlier threatened to deploy the U.S. military if governors do not use the National Guard to stop the violence.

"We have our First Amendment right to assemble. That's what we have," Lewis said. "They have stripped us of our pride. They have killed black men on TV. They have locked black men up…So now, you want to take our voice away from us?

First Amendment. We have our right to assemble. Give us some kind of dignity. If you're going to take everything else away, give us our voice."

7:04 p.m.: Protests are expected to be ongoing into the evening hours in St. Petersburg.

6:10 p.m.: Another group of people began walking from Williams Park to the St. Petersburg Police Department in a peaceful demonstration.

5 p.m.: St. Petersburg police listen to protesters as they speak during an ongoing demonstration.

4:30 p.m.: The peaceful protest at the St. Petersburg Police Department continues, with a group laying down on 1st Avenue North chanting, "I can't breathe."

3 p.m.: One protester in front of the St. Petersburg Police Department ask people who are wanting to be violent to leave.

Sheriff Grady Judd said the curfew applies to everyone and all businesses within the county.

11:45 a.m.: Tampa Police Chief Brian Dugan said five officers were exposed Sunday to someone who tested positive for coronavirus. Dugan said the department is still trying to determine whether the person was a demonstrator.

"My concern...is that they're in the face of our officers," Dugan said. "It’s difficult for our officers to wear masks when they’re out there in the heat and sweating. It's problematic. It’ll be interesting to see how many people get exposed—especially for our first responders."

"COVID-19 is a concern," Mayor Jane Castor said. "Bringing hundreds of individuals in close contact, especially when the black community is at higher risk, that’s something that I’m hoping people keep in mind when they’re attending these masks. Reminding everyone to wear masks and help stop the spread."

RELATED: More than 20 people arrested for burglary, rioting after Sunday protests in Tampa

6:15 a.m.: Curfews in the city of Tampa and Polk County lifted Monday morning after a night of protests.

Tampa's curfew runs 7:30 p.m. to 6 a.m. and applies to all businesses and people until further notice.