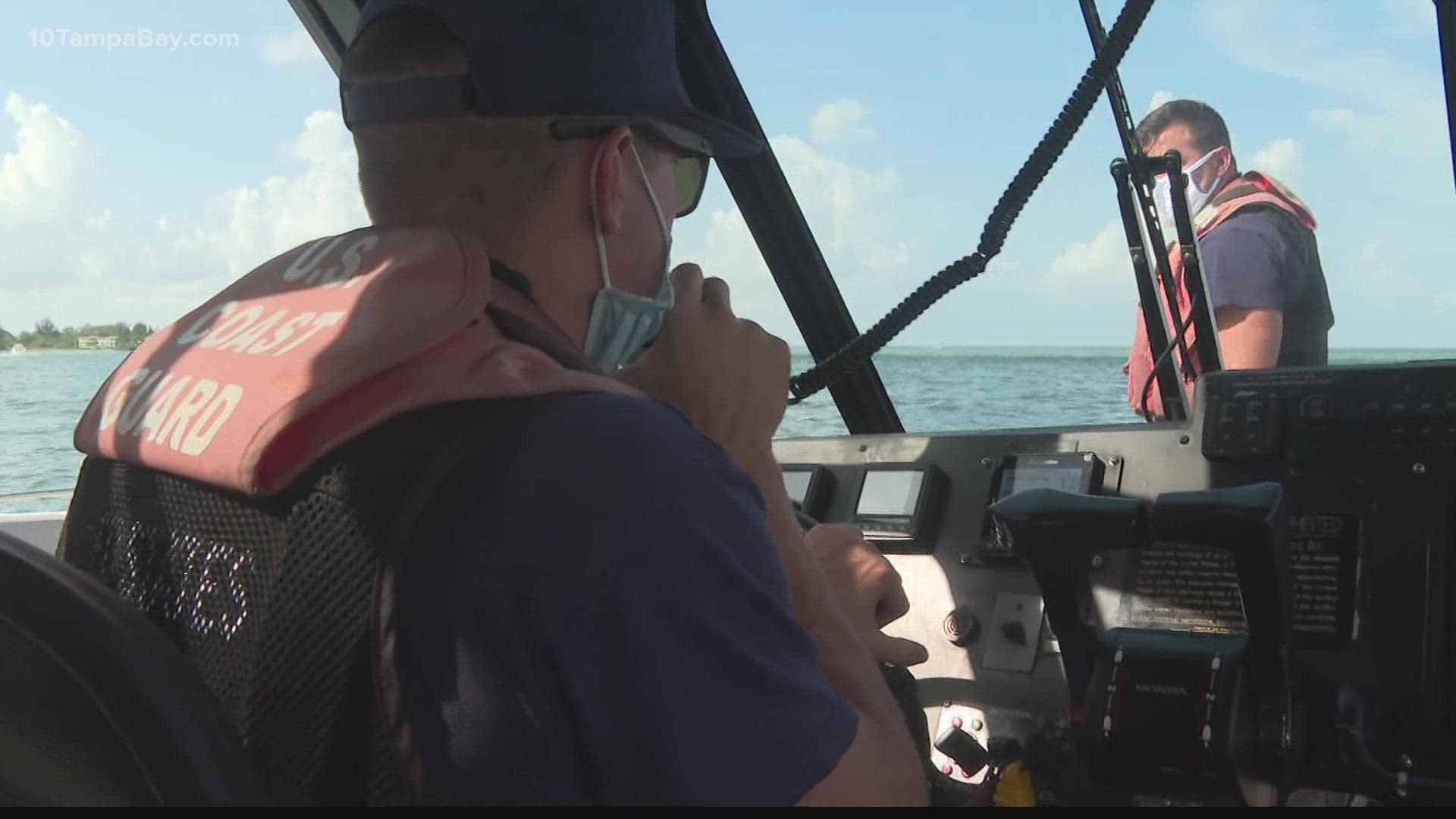 SARASOTA COUNTY, Fla. — Hundreds of boats and Jet Skis were out on the water around the Tampa Bay area this Labor Day weekend. Vacationers and fun-seekers trooped to the waterways with their various vessels to celebrate.

The United States Coast Guard was also out on patrol to check boats and enforce safety rules.

The most recent data showed Florida waters were the deadliest for boaters in 2020. A Florida Fish and Wildlife Conservation Commission report released in May showed there were more than 800 boating-related accidents and nearly 80 deaths - mainly from collisions.

The reports also showed that drowning and falling overboard were among the top causes of death with many of the victims not wearing a life jacket. It's one of the things Coast Guard officers were looking for as they inspected boats.

"We are looking for life jackets obviously, enough for everybody that's on on board, we are looking for throw able life rings or those little square cushions," said Petty Officer 2nd Class Zachary Beckham of the U.S. Coast Guard.

"We usually don't get out on the blue water too much so it's a little different," said Charlie Laconti whose boat was randomly stopped for a safety check.

Laconti and his wife were vacationing in Sarasota from Texas and decided to rent a boat for the day. Although they have been avid boaters for a very long time, this would be their first time getting stopped by the US Coast Guard.

The officers introduced themselves to the family and asked to see various documents like a license and certification. They also checked for safety items like a first aid kit, flashlights, floats and flares.

The Laconti's boat, which was rented from a local boat club, checked out on most safety items on the list. However, there was no whistle found in the kit or on any of the life jacket, and the horn on the boat was not functioning properly.

Fortunately in this case, the boat wasn't owned by Laconti and is a rental and therefore a citation would be on the boat club's record. However, the Coast Guard officers issued a warning ticket which the Laconti's would take back to the rental business so they would rectify the notated problems on the safety checklist

Boating safety is not just limited to having the right life jacket and equipment on board. It's also about keeping an eye out for wildlife like manatees and sea turtles. Officers urge people to look out for signs that notify about the presence of wildlife and to obey the instructions on all signs including the ones in channel and areas designated as no-wake zones. They also warn against boating under the influence of drugs or alcohol.

"When you're out here in that heat, you drink a couple, you think you're good, the next thing you know you're not. It is absolutely a concern, people want to come out here and have fun and that's fine but we just want to make sure everyone is being safe," Officer Beckham said.

The Coast Guard also keeps an eye out for speeding or reckless jet-skis and boats creating safety hazards for others boaters.

"If everyone would just slows down, we're all going to get to where we need to be. Don't rush, make sure before you get underway you have all your stuff," he said.

"It's just like driving, you've got to be watching out for the other boaters and you have to be defensive. Just pay attention to what you're doing, don't just look forward, look around, look behind you, and that way you'll be safe. But you've got to pay attention," Laconti concluded.