The formal statement is part of the university's efforts to stand in solidarity with Indigenous Peoples, school officials said.

TAMPA, Fla. — "Historically inaccurate." That's what the University of South Florida's Department of Anthropology says many Americans' ideas on Thanksgiving's origins are.

And, as a result, such ideas create "damaging portrayals of Native Americans." Because of this, the university's anthropology department recognizes "the historical and continuing impacts of colonization on Indigenous communities."

Native Americans were the first people to inhabit the Tampa Bay area, according to the Associated Press. European forces brought disease, slavery and destruction to Indigenous cultures. During the Seminole wars of the 1800s, President Andrew Jackson called for the removal of the Seminole people from the area.

In an effort to show solidarity and begin to "right the wrongs" many in anthropology had in perpetuating harmful depictions of Indigenous Peoples, the university formally acknowledged both its Tampa and St. Petersburg campuses currently stand on land that belongs to several Indigenous tribes, namely the Seminole Tribe of Florida and others including the Calusa and Tocobaga.

“The Department of Anthropology acknowledges that the University of South Florida resides on the traditional Homelands and territories of the Seminole, as well as other historical groups including the Calusa and Tocobaga. Today, the state of Florida is home to the Seminole, Miccosukee, Muscogee, and Choctaw, and to individuals of many other Native groups.

As a Department, we recognize the historical and continuing impacts of colonization on Indigenous communities, their resilience in the face of colonial and state sponsored violence, and fully support Indigenous Sovereignty. We will continue work to be more accountable to the needs of American Indian and Indigenous peoples.”

Additionally, the anthropology department says it has completed its NAGPRA repatriation inventory and says it is committed to cultivating a relationship with the Seminole Tribe of Florida.

You can read the university's full statement here. 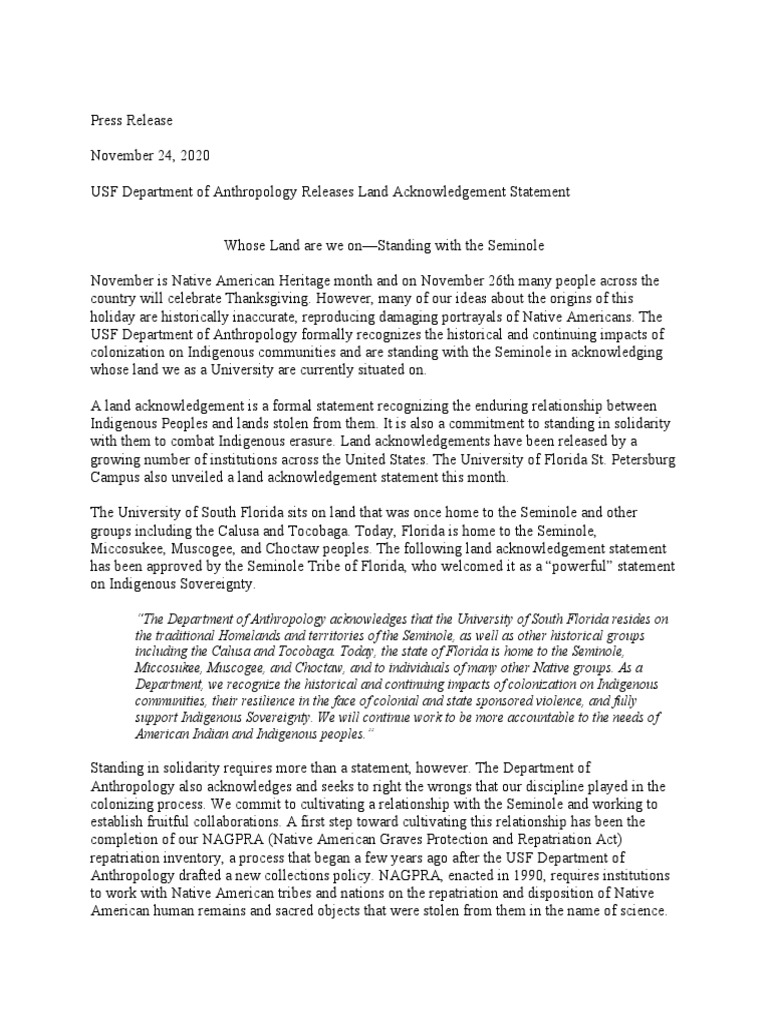 USF Land Acknowledgement Press Release | Seminole | Ethnic Groups
November is Native American Heritage month and on November 26th many people across thecountry will celebrate Thanksgiving. However, many of our ideas about the origins of thisholiday are historically inaccurate, reproducing damaging portrayals of Native Americans.

RELATED: USF: No fans allowed at games for start of basketball season