The footage shows the moments authorities with the Grant County Sheriff's Office arrived at the burning boat on Moses Lake and how they extinguished the flames. 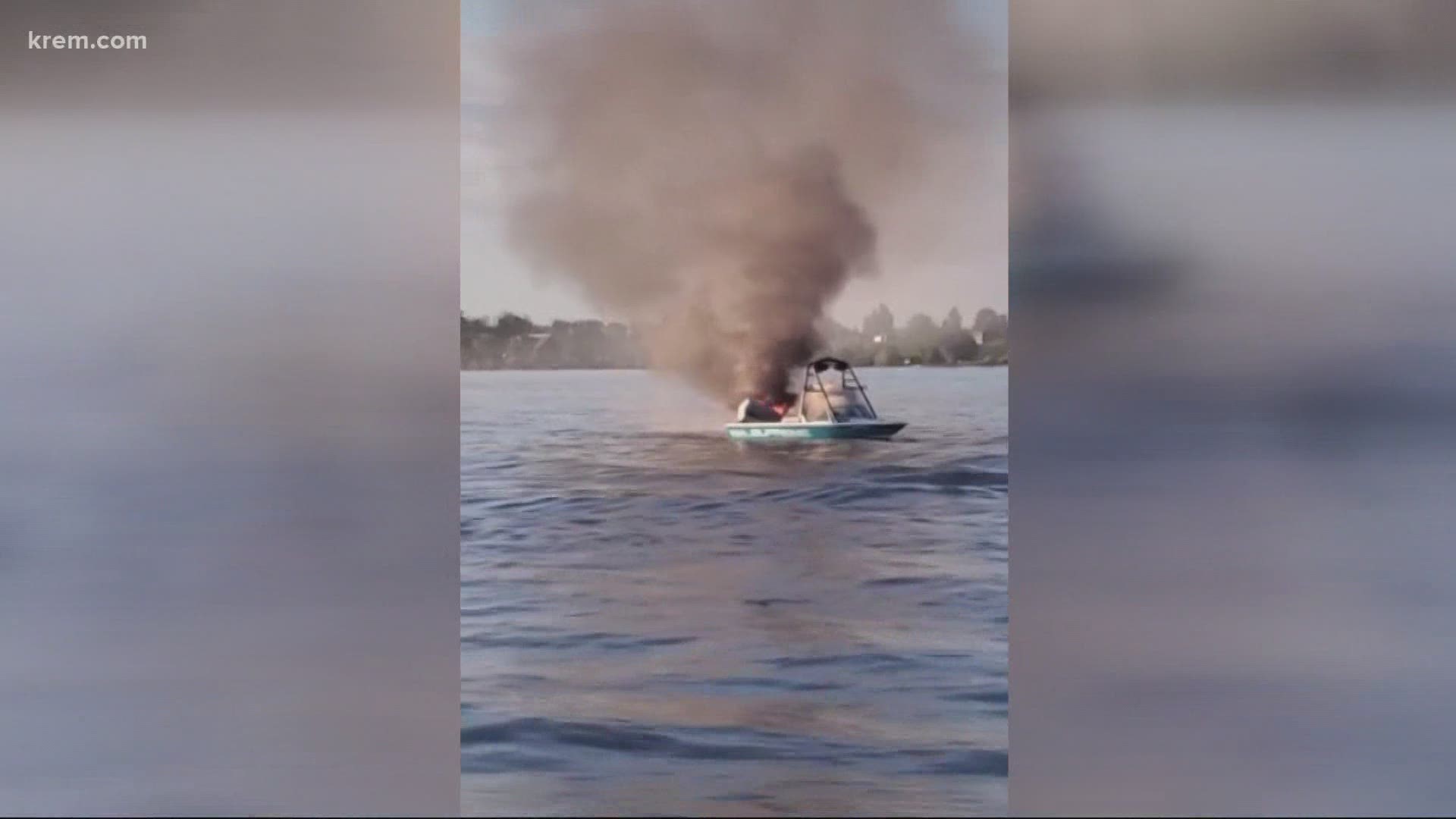 MOSES LAKE, Wash. — Body camera footage from the Grant County Sheriff's Office shows the first moments when crews arrived to a boat fire on Moses Lake and how authorities worked to extinguish the flames.

This comes after the driver of a boat on Moses Lake claims passengers on another boat harassed them and yelled gay slurs at them before the second boat caught fire on Sunday, May 30.

The incident was caught on camera and posted on TikTok by the driver's account @uhohbigboi. The TikTok went viral, and has since garnered millions of likes and views. Warning: the video posted on TikTok shows an obscene hand gesture.

The final scenes of the TikTok video show the boat engulfed in flames before the flames are extinguished by Moses Lake firefighters. Another video posted on TikTok by the same user shows the passengers of the circling vessel boarding the other boat.

The body camera footage released by the Grant County Sheriff's Office on Wednesday is 43 seconds long. Tap here for the video or watch below:

Grant County Sheriff Tom Jones wrote in a Facebook post on Wednesday that the person who recorded the viral TikTok video on Moses Lake contacted the sheriff's office at about 3 p.m. on Tuesday.

Investigators interviewed the occupants of the boat that was circled. The person who recorded the video and two other people on the boat were "adamant about not wishing to pursue charges against the people on the blue vessel that burned," Jones wrote in the Facebook post.

"We respect their expectation to not be publicly named as well as the decision not to pursue criminal charges in this matter. We have privately thanked them for their heroic efforts in rescuing the people who jumped from the burning boat," the post continues. "The Grant County Sheriff’s Office does not stand for intolerance of anyone and will investigate those cases accordingly.  "

The driver of the boat that was circled also tweeted pictures from the incident with the caption, "These people harassed my family because we were flying gay pride flags in Moses Lake Washington, by racing around us and shouting gay slurs. Then, their boat literally blew up! #KarmaIsReal".

On Tuesday, the driver of the boat posted another TikTok video that showed their Pride flags flying on the boat again. They captioned the video, "And we're back at it again! We will not hide our #pride."

The passengers in the boat that burned had minor burn injuries and refused medical treatment, Jones said. The boat damaged in the fire was impounded at a local towing company and the owners have already picked it up, he added.