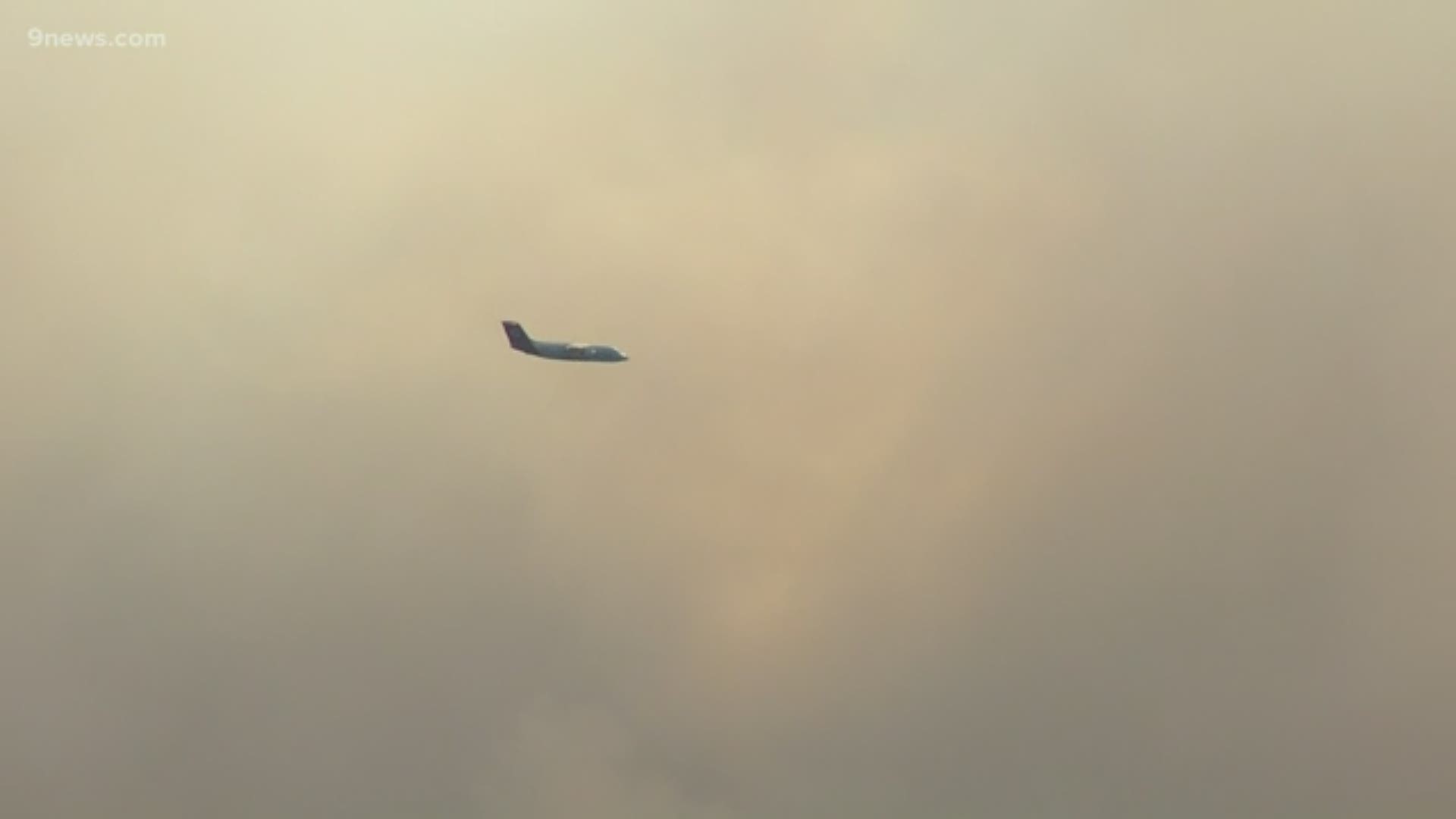 SALIDA, Colo. — The Decker Fire, which has burned more than 7,105 acres near Salida, was 15 percent contained as of Saturday morning, according to fire officials.

The Fremont County Sheriff's Office said that due to prevailing winds, some residents in the Howard area were on pre-evacuation status as of 11:30 a.m. Saturday.

Evacuation orders for residents in the Boot Hill and Methodist Estates subdivisions, and any others who access their homes via County Road 108, were lifted as of 10 a.m. last Wednesday, the Chaffee County Sheriff's Office said.

The pre-evacuation order for the communities of Wellsville and Swissvale were also lifted Monday.

Residents were advised that fire activity and smoke would still be visible.

The Chaffee County Sheriff's Office confirmed one cabin on Methodist Mountain was lost to the fire. One structure was also lost in Fremont County.

Chaffee County Sheriff John Spezze told 9NEWS that the fire was a quarter-mile away from the nearest homes last Saturday.

"It looks to me we are within about a quarter-mile that’s within our evacuation area. We have had one structure, we were able to confirm this morning, that was destroyed," said Spezze. "We’re concerned about the wind. Wind drives the fire. Our humidity is down, our temperatures are going up again, we have a lot of wind coming into the area."

The fire was sparked by lightning Sept. 8 and was originally burning 9 miles south of Salida. It remained relatively small until strong winds last week caused the wildfire to grow by nearly 1,700 acres.

Nearly 900 people were working to contain the fire.

"It’s been hot. It’s been dry. There’s no humidity. There’s been no moisture for over a month, and the winds have been nonstop," said Tim Towne, who lives in Howard, a community where officials fear the wind could blow the fire. "Oh, you can definitely smell the smoke. You’ve been smelling it almost all week long."

Towne was placed on pre-evacuation notice, meaning he and his family should be ready to leave if needed.

In areas that were more difficult to access, firefighters were cutting containment lines farther away from the fire, Tombolatto said. In the area around the Continental Divide, crews were scouting the land to make a plan to get a containment line around it, but the fire wasn't moving fast in that area.

As the fire burns the mountain, it also threatened the dreams of the residents who live nearby.

"I just moved here two months ago. I’m actually building a house on Methodist Mountain," said Beth Scully, a resident of Salida. "It’s supposed to be our retirement home. We’ll see how that works when it finishes out. It was our dream home up here."

The home she's building was one mile away from the flames. She said she hoped the wind would push the fire in the other direction.

Members of the Salida community showed their support for fire personnel battling the flames.

Incident Commander Mark Giacoletto said there were concerns for structures in the Howard area, about 14 miles southeast of Salida. Some Howard residents were notified at a meeting a week ago to prepare for evacuations.

"If the embers go to 15,000 feet and with a 45 mph wind, it doesn’t take them long to go 8 miles. If they’re still hot and they hit a tree two blocks from the house, you’re toast," said resident Jerry Scavezze as he walked out of a meeting last Friday at the Howard Volunteer Fire Department for people in the pre-evacuation zone. "All the stuff can be replaced. It’s just stuff. It’s the family photos, take the hard drive, take the stuff that really matters that you can’t replace. Get that out of the house."

Scavezze said he canceled a trip to the East Coast to stay back and protect his home.

"It jumped the ridge overnight and started coming down towards Salida. We didn’t expect that to happen either," said Susan Bethany, who was at the meeting with Scavezze. "We’ve had enough fires happen around us and you think, what would I do if it happened to me? Well, I guess it’s happening."

West Metro Fire Rescue sent four members of its rapid extraction team to the fire last Friday afternoon. They could be at the fire for up to 14 days.

The team has specialized training in wildland fire and rope rescue, according to a Facebook post from the agency. They'll be working to rescue injured firefighters, provide emergency medical care and get them to a hospital if necessary.

Dry conditions continue to persist throughout Chaffee County, which prompted officials to enact a Stage 2 fire ban, which prohibits all open fires – including charcoal fires – and any type of open burning. The Sheriff's Office said deputies will strictly enforce the order and will cite violators.