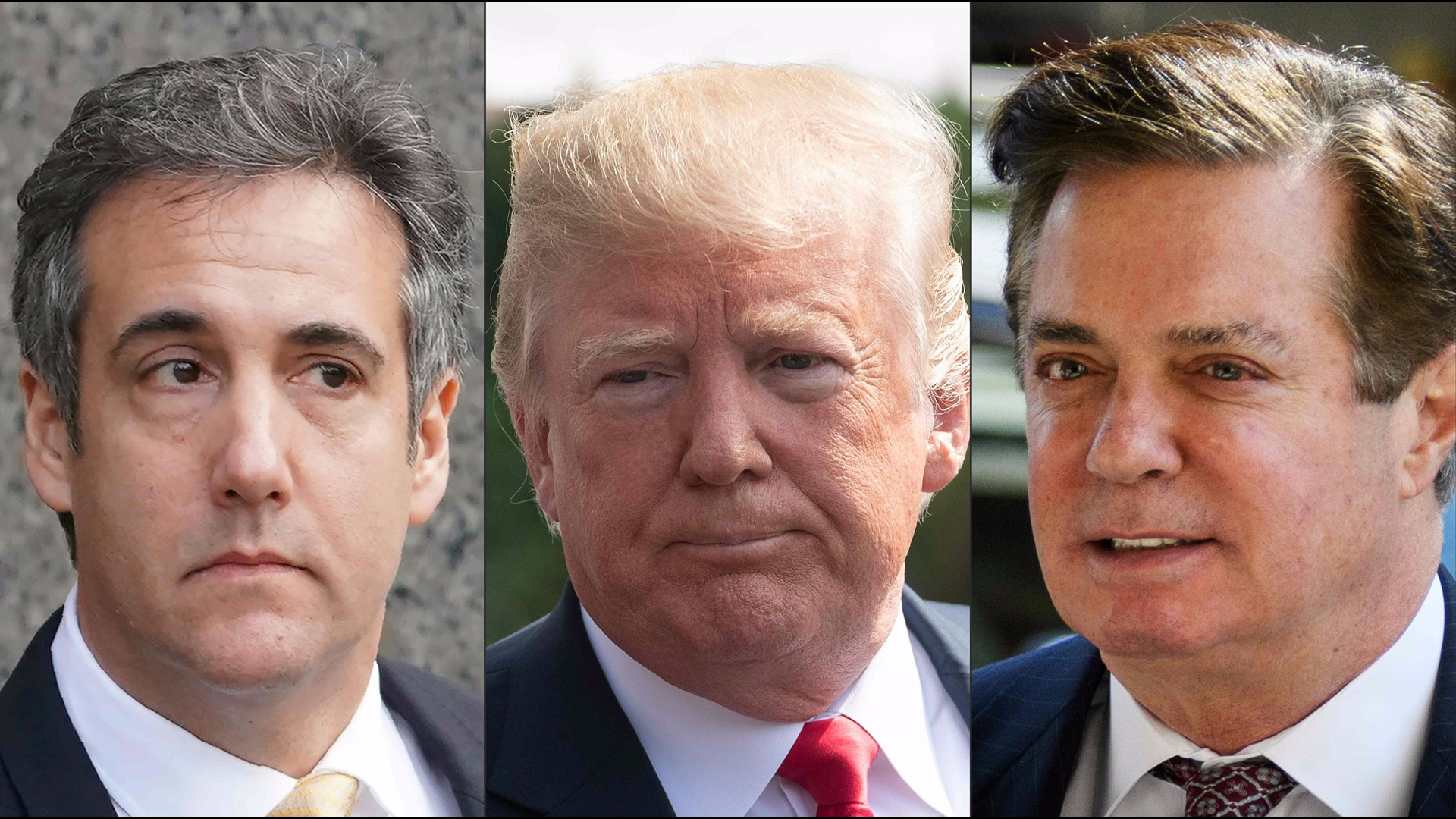 WASHINGTON – A day after prosecutors implicated him in a hush money conspiracy to evade campaign laws, President Donald Trump continued Saturday to say the Russia investigation has yielded nothing.

Trump repeatedly denied that he directed former lawyer Michael Cohen to pay hush money to women who claimed to have had affairs with him; he again disputed allegations that his campaign worked with Russian hackers who meddled in the 2016 presidential campaign.

"We’re very happy with what we are reading because there was no collusion whatsoever," Trump told reporters at the White House as he departed for the Army-Navy football game in Philadelphia. "The last thing I want is help from Russia on a campaign."

Earlier in the day, on Twitter, Trump again denounced special counsel Robert Mueller's investigation as a politically motivated "witch hunt" and a waste of money.

Critics and legal analysts said Trump may be in denial about Friday legal filings that could signal ominous consequences.

"Trump was already in trouble on three main investigative fronts: collusion, obstruction and campaign finance crimes," said Norm Eisen, who chairs the organization Citizens for Responsibility and Ethics in Washington (CREW). "The Cohen sentencing memos advance his worries on all three."

The president made his claims a day after federal prosecutors – in recommending prison time for Cohen, Trump's former lawyer – implicated Trump in a scheme to pay hush money to two women who claimed to have had affairs with him.

Prosecutors said the president – identified in court documents as "Individual-1" – directed Cohen to make the payments to the women in an effort to buy their silence right before the election.

The unreported payments amounted to campaign contributions, and hiding them was a violation of campaign finance laws, prosecutors said.

Cohen, who has pleaded guilty to making false statements to Congress, has also spoken with prosecutors about the Trump campaign's contacts with Russia, which sought to influence the election by email hacks of prominent Democrats.

As early as November 2015, prosecutors said, Cohen was in contact with an unidentified Russian national who claimed to be a "trusted person" in the Russian government.

The person offered the Trump campaign "political synergy," the filing said, and "repeatedly proposed" a meeting between Trump and Russian President Vladimir Putin, though such a meeting never took place.

Special counsel Mueller, a frequent target of Trump, is investigating the Russian meddling, and whether Trump's campaign had any involvement. He is also looking into whether Trump has tried to obstruct the investigation.

Trump, who has consistently denied collusion and obstruction, has frequently described Mueller's probe as a "witch hunt."

Prosecutors also filed new documents in the case of Paul Manafort, claiming he has lied about the Trump campaign and Russia as part of a plea bargain agreement with Mueller's office.

Trump and his allies said the Manafort filing did not implicated the president.

More: Five bombshells from the Michael Cohen memos, including information he's given Mueller

As for Cohen, aides described the president's former lawyer as a liar who will say anything to get himself a lighter sentence. "Mr. Cohen has repeatedly lied and as the prosecution has pointed out to the court, Mr. Cohen is no hero" said White House spokeswoman Sarah Sanders.

After the filings surfaced Friday, Trump himself sent out a somewhat cryptic tweet: "Totally clears the President. Thank you!"

At the White House, Trump again said Mueller should be investigating Clinton and the Democrats in connection with Russia. He called it a “very one-sided situation but I think it’s all turning around very nicely.”

Bravado or not, legal analysts said Trump could be looking at major legal problems, especially regarding Cohen's statements.

"The real news right now is not about Cohen’s sentence," said Neal Katyal, former acting U.S. solicitor general. "It is about the conclusion by federal prosecutors that Donald J. Trump has committed a serious felony."

1 / 6
Andrew Harnik, AP
In this Sept. 19, 2017 file photo, President Trump's personal attorney Michael Cohen appears in front of members of the media after a closed door meeting with the Senate Intelligence Committee on Capitol Hill, in Washington. Federal agents carrying court-authorized search warrants have seized documents from Cohen according to a statement from Cohen’s attorney, Stephen Ryan. He says that the search warrants were executed by the office of the U.S. Attorney for Southern District of New York but they are “in part” related to special counsel Robert Mueller’s investigation.