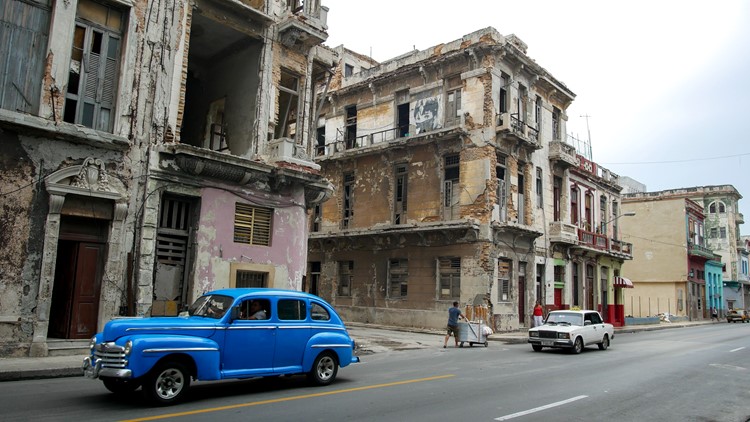 How Havana is collapsing, building by building

HAVANA – Rafael Álvarez was up at 6:30 a.m. to warm milk for his baby daughter when he heard the sound of pebbles falling.

“That’s when the floor below us came loose. We were left hanging in the air, then fell into the abyss.”

Álvarez, 41, a baker, was buried in rubble to his waist. His mother, daughter and two others were killed when the 101-year-old building collapsed.

“Save the babies!” were his mother’s last words, he said.

In Havana, some of the same architectural gems that draw tens of thousands of American tourists crash to the ground every year. Causes range from weather and neglect to faulty renovations and theft of structural beams.

Carlos Guerrero, 45, said he and his family live “like scared dogs” in a crumbling building along Merced Street.

Neighbors tell them, “Get out of there! It’s going to collapse!”

“It makes you feel like going and living under a bridge,” said Guerrero, who vows to grab a machete and seek revenge on housing officials if anything happens to his wife and three children.

The collapses worsened an already severe housing shortage. Havana alone had a deficit of 206,000 homes in 2016, official figures show.

The housing crisis is one of the most pressing challenges facing Cuban President Miguel Díaz-Canel, who vowed to improve housing after taking charge of the communist nation of 11 million people in April.

Havana officials have won dozens of international awards for their work to restore the historic sector known as Old Havana, with styles ranging from Baroque and neoclassical to Art Deco.

UNESCO calls Old Havana one of Latin America’s “most notable” historic city centers and named it a World Heritage site in 1982.

Havana officials use tourism revenue to renovate many architectural treasures, but can’t keep up with the decay.

Havana, a city of about 2 million people, had a shortage of 206,000 homes in 2016, official figures show.
Tracey Eaton, Special to USA TODAY

Officials estimate 28,000 people live in buildings that could collapse at any moment. Some residents refuse to leave structures that authorities have declared unsafe.

“Of course we’re scared but what are we going to do?” said Yanelis Flores, 42, who rejected a government offer to move into a shelter.

“I will wait for a house,” said Flores from the eighth floor of the former Hotel Astor, which had American management and 200 rooms in the 1930s.

Today, daylight shines through terrifying cracks in the walls.

“This is worse than a pig pen,” Flores said. “It’s rotting.”

The third-floor staircase collapsed in April 2017.

“It was a tremendous explosion – boom!” second-floor resident Yuslemy Díaz recalled. “People on the third and fourth floors were stranded because they couldn’t get down. It was a madhouse.”

Workers brought in a truck-mounted crane to deliver meals to stranded residents.

They built a makeshift wooden staircase. Authorities began relocating residents on the 9th and 10th floors.

‘You live with fear’

“The moment it starts to rain and a little stone falls next to you, you think it was the building. You live with fear. A building doesn’t tell you, ‘I’m going to fall tomorrow at 3 p.m.’ It falls – boom! – at any time day or night. It doesn’t warn you.”

Before the stairway failure, residents say, people had been prying valuable marble tiles from the walls, weakening the staircase.

Yunier Angulo, 31, a butcher, left the building seconds before the stairway crumbled. A man just behind him was seriously hurt.

Angulo’s friends told him he was lucky. “You were born that day,” they said. But he doesn’t feel any safer and said he sleeps “with one eye open and the other closed.”

“The building could collapse tomorrow. It gets worse every day.”

Across town, Leydis Castro, 77, has a leaky ceiling, but refuses to ask for a handout. “The government doesn’t have a duty to fix everyone’s house.”

Her neighbors disagreed and wouldn’t pay a cent when the city offered repairs in exchange for a monthly fee, she said.

Today, Magaly Marrero, 65, said her apartment is so bad that she showers in the kitchen and relieves herself in a bucket.

“Sometimes I say, ‘God, how long will I live in these conditions?’ This is no life,” she said. “What can I aspire to? To die buried because one day the roof comes down and crushes me?”

Cuban officials don’t release figures on those killed or injured in building collapses.

Álvarez, the baker, said before his second-story apartment came down on July 15, 2015, workers on the ground floor had been using a jackhammer to strip the walls to the brick. He said cracks from below began inching toward his apartment. His mother complained, but city inspectors said the workers weren’t to blame.

Álvarez said his wife, Lizbett, 41, fell head first into the rubble during the building collapse and was in a coma for 22 days. She recovered, but doesn’t like talking about the episode and won’t walk past 409 Havana Street where her home once stood.

Álvarez fractured his spine in three places, but dismissed his injuries and praised the victims.

Rafael Álvarez said his mother who was killed in the building collapse taught him “to be strong, to persevere. To be a good person, to get along with everyone.”
Tracey Eaton, Special to USA TODAY

He said his mother, Mayra Páez, 60, shouted “Save the babies!” until her voice grew silent.

Rescuers told him she suffocated. She was a former nurse, “much loved in the neighborhood,” her son said.

She taught him “to be strong, to persevere. To be a good person, to get along with everyone.”

No one could save his daughter, Genolan, 3. She was “a happy girl,” her father said. “She talked all the time and danced a lot.”

His nephew, Jorge Álvarez, 18, wanted to be a welder.

The teenager’s girlfriend, Glendys Kindelán, had just turned 18. Her mother, Yaima Kindelán, said she frantically searched for her daughter at hospitals before finding her body, wrapped in gauze at a funeral home.

She said her daughter was “a very respectful girl, a student” who dressed as a nurse for a photo shoot on her 15th birthday. Her mom joined her as a police officer.

The teen had two dogs, Yonky and Princesa, who rarely left her side. “Having those little animals that she loved so much, she wanted to become a veterinarian,” Kindelán said.

After the accident, authorities investigated an architect and four others who had planned to open a fast-food restaurant at the site.

This summer, authorities told Álvarez they didn’t have enough evidence to prosecute anyone.

“I started to cry. I expected that justice would be done. They said, ‘Calm down, sir. Calm down. Do you want some water?’

“What I want is justice. I don’t want anything else.”