It's going to be another busy, above average hurricane season, meteorologists say

After a nightmarish 2017 hurricane season featuring monsters such as Harvey, Irma and Maria, many in the U.S. are hoping for a quieter year. A top forecasting group says that won't be the case.

Meteorologist Phil Klotzbach and other experts from Colorado State University — regarded as the nation's top seasonal hurricane forecasters — predict 14 named tropical storms, of which seven will become hurricanes. Both numbers are above the average of 12 and six, respectively.

A tropical storm becomes a hurricane when its wind speed reaches 74 mph.

Of the seven predicted hurricanes, three are expected to spin into major hurricanes — category 3, 4 or 5 — with sustained wind speeds of 111 mph or greater. The group said there's a slightly above-average chance for major hurricanes to make landfall along the U.S. coastline. Klotzbach put the chance of a major hurricane strike at 63%.

The Atlantic hurricane season runs from June 1 to Nov. 30, though storms sometimes form outside those dates. 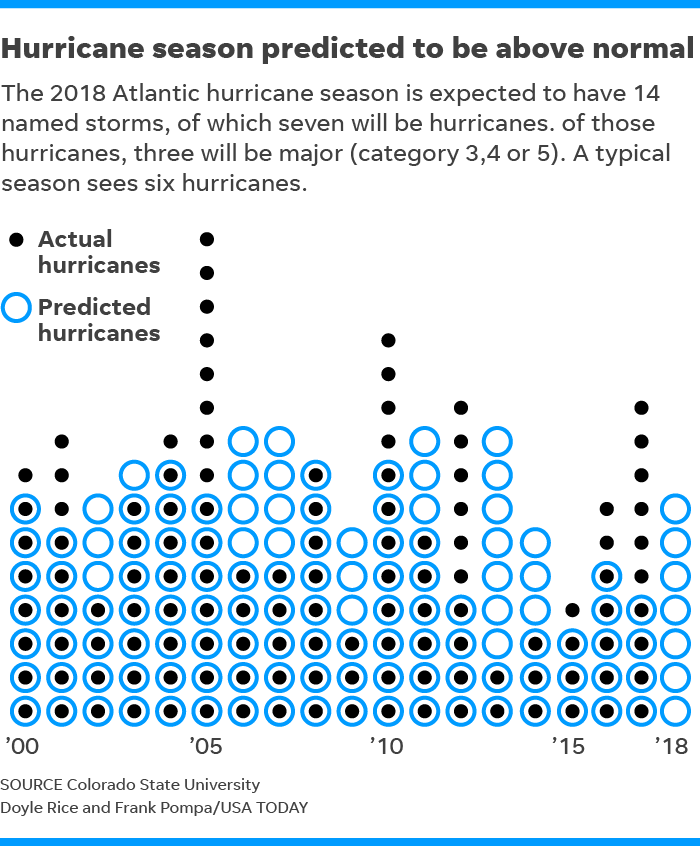 One of the major determining factors in hurricane forecasting is whether the U.S. is in an El Niño or La Niña climate pattern, he said.

El Niño is a natural warming of tropical Pacific Ocean water, which tends to suppress the development of Atlantic hurricanes. Its opposite, La Niña, marked by cooler ocean water, tends to increase hurricanes in the Atlantic.

Klotzbach said we're now in a weak La Niña event, which appears likely to diminish over the next several months. At this point, a significant El Niño is not anticipated for the summer or fall, he added.

The other big question mark in this season's predictions are how warm sea-surface temperatures will be in the tropical and far North Atlantic Ocean during the peak of the Atlantic hurricane season, according to the forecast.

Hurricanes need the fuel of warm ocean water to develop and strengthen.

Insurance companies, emergency managers and the media use the forecasts to prepare Americans for the year's hurricane threat. The team's annual predictions provide a best estimate of activity during the upcoming season, not an exact measure, according to Colorado State.

"We issue these forecasts to satisfy the curiosity of the general public and to bring attention to the hurricane problem," the university said. "There is a general interest in knowing what the odds are for an active or inactive season."

The university, under the direction of meteorologist William Gray, was the first group to predict seasonal hurricane activity in the mid-1980s. Gray died in 2016.

This is the team's 35th forecast. It covers the Atlantic basin, which includes the Caribbean Sea and the Gulf of Mexico.

AccuWeather released its hurricane forecast for the upcoming season earlier this week, predicting 12-15 named storms would form, of which six to eight will be hurricanes. The firm said three to four are likely to hit the U.S.

The National Oceanic and Atmospheric Administration will issue its forecast in May.

The first named storm of the Atlantic hurricane season will be Alberto, followed by Beryl, Chris, Debby and Ernesto, the National Hurricane Center said.

Hurricane Irma damage and destruction in the Caribbean