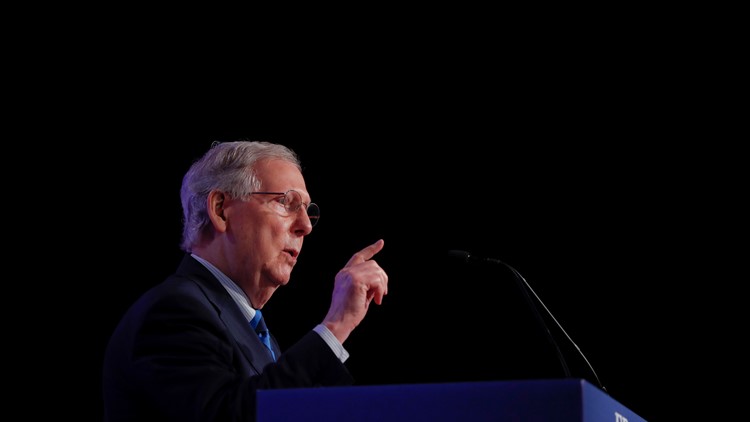 McConnell: We're going to 'plow right through' and get Kavanaugh confirmed despite assault allegation

WASHINGTON – Supporters of Christine Blasey Ford criticized Majority Leader Mitch McConnell online Friday after he said – despite Ford’s allegation that Judge Brett Kavanaugh sexually assaulted her when she was a teenager – Kavanaugh would be on the Supreme Court soon.

“In the very near future, Judge Kavanaugh will be on the United States Supreme Court,” McConnell said to applause from religious conservatives at the Value Voters Summit Friday. “So my friends, keep the faith, don't get rattled by all of this. We're going to plow right through it and do our job.”

Ford has alleged that in the early 1980s Kavanaugh and a friend took her into a room where he pinned her to a bed, groped her, tried to remove her clothes and put his hands over her mouth to muffle her when they were both teenagers at a house party in the suburbs of Washington, D.C.

Kavanaugh has vehemently denied the allegation.

Senate Republicans have stood behind Kavanaugh but also have not attacked Ford. Both Kavanaugh and Ford have said they will testify in front of Congress, but Ford’s lawyers are still negotiating the terms of her appearance.

Ford’s supporters said McConnell’s comments Friday morning proved that he was not serious about hearing the California professor’s side of the story and was just doing it for appearances.

.@SenateMajLdr says to Dr. Blasey Ford: Testify or don't testify. It doesn't really matter at all. We don't care. We will appoint Judge Kavanaugh despite your credible allegation. https://t.co/ik9QSt59Ls

So much for getting to the bottom of what happened to Professor Ford. Mitch McConnell has already determined the outcome. https://t.co/qOkggDJ0E3

Mitch McConnell says he’s got the votes to confirm Kavanaugh. Make no mistake, his work is done. His unethical tactics have solidified an extremely conservative court for the next generation, despite what the majority of Americans want. We can’t afford complacency ever again!

McConnell isn’t the only Republican to take heat for his comments about the allegation. President Trump spent most of the week saying Ford deserved to be heard but Friday morning he questioned why Ford hadn’t reported the incident at the time and instead waited decades to come forward.

Sen. Dean Heller of Nevada, the most vulnerable GOP senator up for re-election in November, called the allegation a “hiccup” Wednesday. On Thursday, he clarified that "hiccup" was referring to the way Democrats had handled Ford's allegation.

As the most powerful man in the Senate, Kentucky's senior senator has spearheaded dozens of Trump appointments at a breathtaking pace. Kavanaugh is a key piece of that puzzle for McConnell’s legacy after he infamously blocked former President Barack Obama from filling a vacancy on the high court in 2016.

McConnell said with a tiny 51-49 majority that was the most consequential decision he made. He said if Republicans hold onto the Senate for another two years it can transform the courts with pro-family and pro-growth judges.

“If you want to have a longtime impact on what kind of country we’re going to have for the next generation the single most consequential thing we can do is these lifetime appointment of men and women to the court who believe that the job of a judge is to follow the law,” McConnell said.

McConnell described Kavanaugh as a "stunning individual" to the crowd, which represents one of the top gatherings for social conservatives in the country. He said the challenge for the activist assembled at the summit is to wait out the obstruction.

More: Kavanaugh accuser gives terms for Senate testimony, including him not being in the room