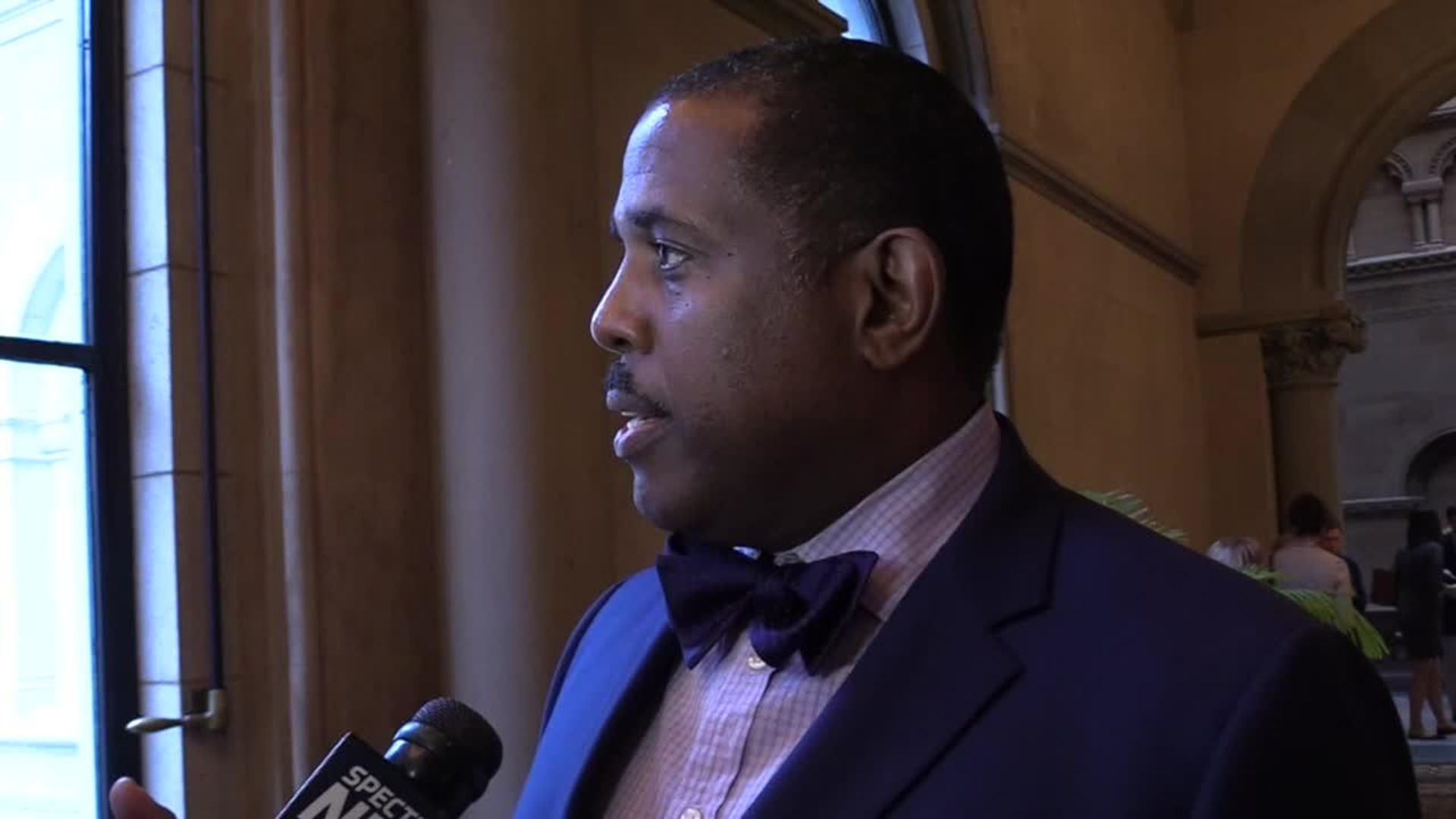 Credit: Hans Pennink, AP
In this Feb. 6, 2017, file photo, Sen. Kevin Parker, D- Brooklyn, stands at the podium, flanked by Senate members during a news conference at the Capitol in Albany, N.Y. Parker wants to require police to scrutinize social media activity and online searches of handgun license applicants, and disqualify those who make violent or hateful posts.

ALBANY, N.Y. – A state senator pushing a bill that would require gun purchasers to submit to a social-media search urged a Senate Republican aide to kill herself in a now-deleted Twitter post on Tuesday.

The verified Twitter account of Sen. Kevin Parker, D-Brooklyn, posted the violent demand after the aide, Candice Giove, accused him of misusing a Senate-issue parking placard.

"Kill yourself!" Parker's tweeted in response.

The tweet was originally posted at 11:25 a.m. EST. It was deleted minutes later.

"I sincerely apologize," Parker wrote. "I used a poor choice of words. Suicide is a serious thing and and should not be made light of."

Within a few hours, however, Parker was tweeting at Giove again, saying she's on the "wrong side of history for every important issue facing New York State!"

Parker attracted attention late last month when he proposed a bill that would require those seeking a firearm permit to consent to having their social-media accounts searched for objectionable content.

The bill would require gun-seekers to turn over their passwords to key accounts to police, if necessary.

I sincerely apologize. I used a poor choice of words. Suicide is a serious thing and and should not be made light of.

"Did a Senator just write this to me?" she wrote.

"I was disappointed in Senator Parker’s tweet," Stewart-Cousins said. "Suicide is a serious issue and should not be joked about in this manner. I am glad that he has apologized."

Tuesday's tweet was not Parker's first brush with controversy.

In 2010, he was convicted of misdemeanor criminal mischief after damaging a camera belonging to a New York Post photographer who was assigned to take photos of him outside his Brooklyn home.

Parker was cleared of felony charges in the incident.

In response to the tweet Tuesday, one of Parker's Republican colleagues said he shouldn't be serving in office.

"It is clear that Sen. Parker, who already has a history of violence and aggression, is in no state to serve as an elected official," Ortt said in a statement.

"This was reprehensible and it was wrong, and there can be no justification for it," Flanagan said. "Ever."

Jon Campbell is a correspondent with the USA TODAY Network's Albany Bureau.