'The Handmaid's Tale' Season 2 premiere recap: An exercise in self-flagellation

Spoiler alert! The following contains details from "June," the Season 2 premiere of Hulu's The Handmaid's Tale, out Wednesday.

The second season of The Handmaid's Tale kicked off on Hulu Wednesday with enough storm clouds and suffering to make you think it will never be spring again. In the first of two episodes released this week, the Emmy-winning TV drama answered last year's big cliffhanger and established the tone for the new season: Even darker than before.

But there might be a glimmer of hope, or at least whatever "hope" amounts to in this macabre series. After more tortures and debasements and one horrific self-inflicted wound, June (Elisabeth Moss) is Offred no more, having escaped — at least a little — from the horrors of Gilead and hopefully "free" for real. We'll see if it lasts.

More: 'The Handmaid's Tale': Where we left off in Season 1

Offred (Elisabeth Moss) and the other handmaids believe they are about to be executed in a harrowing and queasy scene from the "Handmaid's Tale" Season 2 permiere.
Take Five/Hulu

I couldn't help but agree with Offred's voiceover narration when the horrific opening sequence came to an end: "Seriously," Handmaid's writers? This is how you start your second season? With trolling and emotional manipulation?

The episode resolved last season's cliffhanger, which also happens to be a cliffhanger from Margaret Atwood's 1985 novel, in perhaps the worst way possible. The van took Offred not to her death or her salvation, but to a trick, a brainchild of Aunt Lydia's (who is becoming more of a cartoon villain scene by scene) to punish the handmaids for refusing to stone Janine to death. In an extended, harrowing and gut-wrenching opening, we see Offred and the handmaids we've come to know from Season 1 muzzled, rounded up on a gallows in the ruins of Fenway Park, sobbing and shaking as nooses are tied around their neck. Just as the floor is about to drop beneath them, Lydia (Ann Dowd) appears, spewing biblical nonsense.

It's a senseless and disgusting way to start the season. And considering that Offred eventually escapes with Nick's help, it's also a pointless scene that leads to other pointless scenes of torture, from the handmaids holding the rocks in the rain to Alma's arm being chained to a flame. Offred also gets a taste of what life could be like during her pregnancy if she continues to resist, as Lydia takes her to the red center to see "Ofwyatt," a dirty and seemingly deranged pregnant handmaid who is chained in the dark, even more of a walking womb for Gilead than her sisters.

June (Elisabeth Moss) gets her daughter Hannah (Jordana Blake) from the hospital in a flashback in the "Handmaid's Tale" Season 2 premiere.
George Kraychyk/Hulu

Without any gallows, fire or chained pregnant women, the flashback sequence to June's previous life was far more chilling than the violence in the present-day timeline.

Like many of the flashbacks, things are just a little off:June's husband has to sign a glorified permission slip for her to obtain birth control, and an elementary school sends Hannah to the emergency room for a small fever.

Moss does great work in the back and forth with the hospital nurse, who's all smiles until she starts questioning June's parenting, from being a working mother to giving her daughter Tylenol in the morning. "Children are so precious," she says. "We have to make sure children are in a safe home environment with fit parents."

That she and the school administrator refuse to call June by her actual name, "Osbourne," and repeatedly refer to her as "Mrs. Bankole" is a subtle but wildly effective touch in these scenes. Like the name "Offred," "Mrs. Bankole" is not a name June chose but one society foists  upon her, subtly dehumanizing her as merely the byproduct of a man. June's sole worth is being a mother, and in their eyes, she's failed miserably.

This subtle step toward Gilead is coupled with a much larger one — the attacks on Congress and the White House that we heard about in Season 1. June's life is irrevocably changed that day, but not in the way she planned when she and Luke decided to start trying for a second child. In the present, she's pregnant with her second child, but not in the way she imagined she would be.

Offred (Elisabeth Moss) reaches something close to freedom in the Season 2 premiere of "The Handmaid's Tale."
George Kraychyk/Hulu

As much as Offred was affected by Aunt Lydia's threats, she's not turning down a chance to escape using a key left in a boot.

After a quick checkup at the doctor, Offred plays the worst game of connect the dots ever, following red-dotted keys and doors out of the hospital to a freezer truck that takes her away from Fred, Serena Joy and her life as a handmaid, we hope. She's resting on faith, but when she's delivered to a safe house, Nick is there, and she relaxes at last.

Nick has her burn her handmaid outfit and cut her hair, and Offred – or I guess I should say "June" now – goes a step further in excising her identity as a handmaid by cutting the "red tag" off her ear, and, dripping with blood, declares that she is "free."

It's a powerful scene that's undercut by some nagging concerns, namely the fact that Nick always had the power to break her out, but only did so once she was carrying his child. June's value continues to be defined by her reproductive health, and Nick only sees her as worth saving once she delivered.

A larger problem with this story arc is its structure. If this was the direction the series' writers were going all along, and Nick was always on her side, why not have the van be her salvation? It would have been a far better and less manipulative resolution to that cliffhanger, and it could have avoided putting Offred, the other handmaids — and viewers — through trauma.

Gilead is terrible, we get it. Here's to hoping June finds a way out.

Feel the need to drink during 'Handmaid's Tale?' So does the cast!

Red's the color at 'The Handmaid's Tale' Season 2 premiere 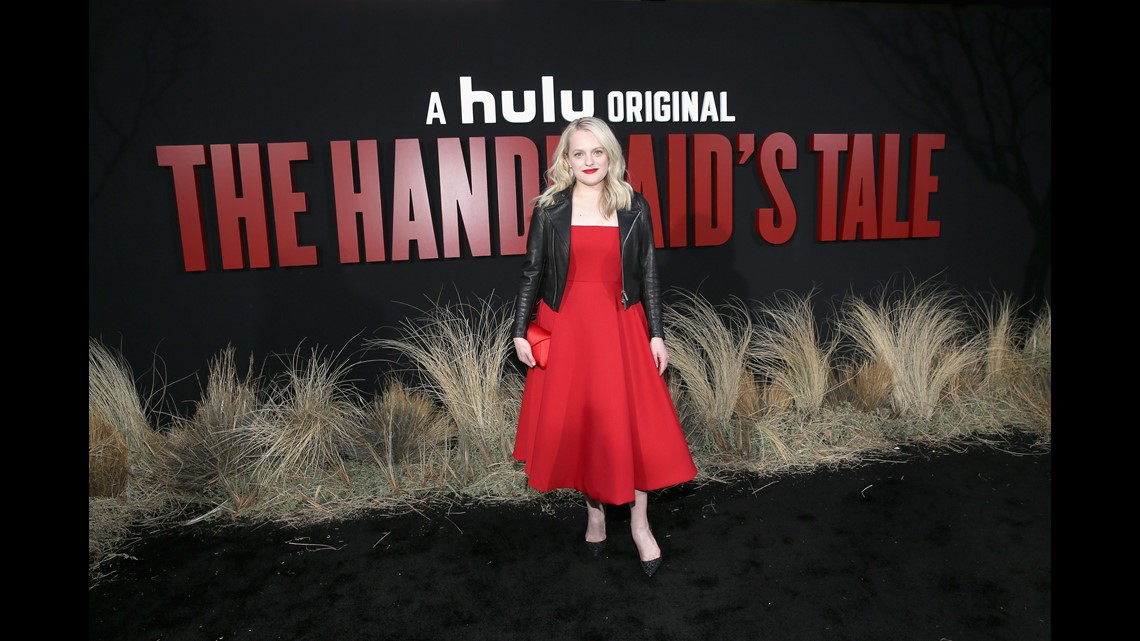