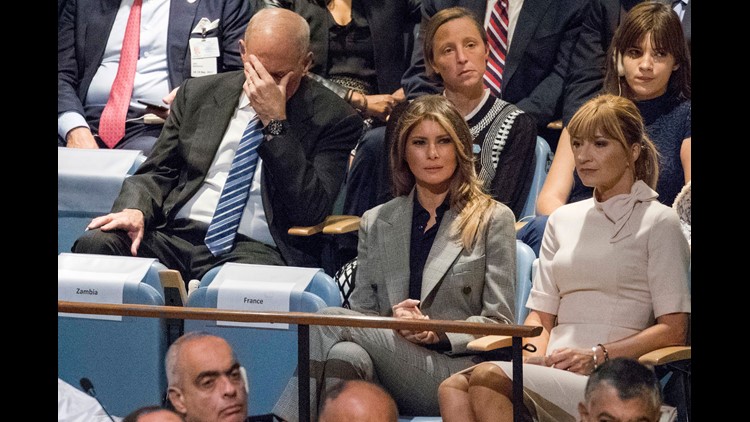 News broke Saturday that John Kelly will be departing his job as White House chief of staff, and soon previous photos of the former Marine general appearing to look tired, exasperated and stressed began resurfacing on social media.

Photos of Kelly holding his head or looking downward have made headlines over his tumultuous 17-month tenure. Often taken when President Donald was speaking, the images served as a window into Kelly's state of mind, some pundits speculated.

It's far from the first time that a politico has analyzed Kelly's body language.

Kelly responded to Trump going off script at an August 2017 event by sternly looking at the floor and shaking his head, CNN reported.

Kelly cradled his head as Trump called North Korea "band of criminals" at the United Nations in September 2017, a Toronto Star reporter found. (He went on to note that phrase "isn't exceptionally controversial by Trump standards.")

Kelly likely reacted with annoyance when Trump said “Germany is totally controlled by Russia" at a breakfast meeting in Brussels, The Washington Post reported citing a body language expert and political scientist.

(The White House dismissed that claim, saying Kelly was reacting to the lack of food at the event, the publication reported.)

The speculation on Kelly's public appearance was often accompanied by reports of his private attitudes. He had to publicly dispute reports he once called Trump "an idiot," and had cast himself as "the lone bulwark against catastrophe" from Trump.

Publicly, Trump has called Kelly “a great guy" despite their clashes, and was careful not to describe Kelly's exit as a firing, saying that “John Kelly will be leaving – I don’t know if I can say ‘retiring.’" He thanked the former Marine general for his long years of public service.

Here's some of the tweets on Kelly's previous photos from today:

John Kelly always looked like he was having fun pic.twitter.com/4AAA389bnl

John Kelly is retiring so he can spend more time with his forehead. pic.twitter.com/7CXpThudVU

Previously, Kelly's expressions were fodder for Twitter as well:

"You guys with the cameras always get me when I'm thinking hard" - John Kelly responding to these photos pic.twitter.com/3a1YPPncQH