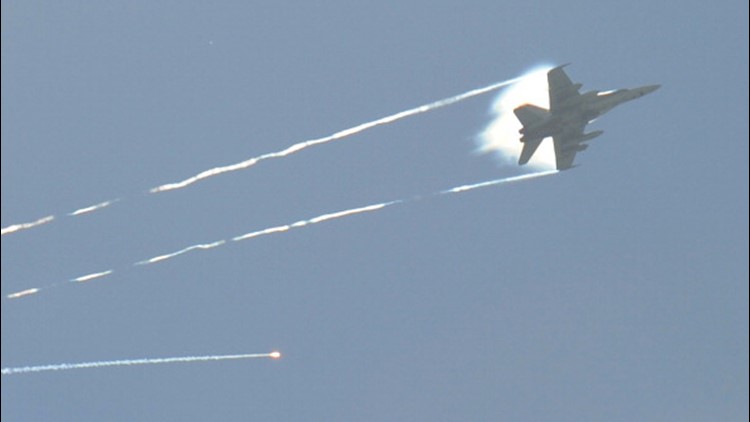 Photo by: TED ALJIBE/AFP/Getty Images
A US FA-18 fighter jet fires its guns and releases flares during live fire drills on the last day of the annual US-Philippine joint military exercise at the former US traget range in Crow Valley, Capas town, north of Manila on May 15, 2014.

1 dead, 5 US Marines missing after warplanes collide off Japan

TOKYO — A Marine refueling plane and a fighter jet crashed into the Pacific Ocean off Japan’s southwestern coast after colliding early Thursday, killing one crew member, injuring another and prompting a search for five more apparently lost at sea, the Marine Corps confirmed.

The rescued Marine was in fair condition.

Search and rescue operations continue for the five remaining Marines who were aboard the KC-130 Hercules refueling plane and F/A-18 Hornet fighter when the accident occurred about 200 miles off the coast of Japan. The warplanes were conducting routine training and aerial refueling at about 2 a.m. when the incident occurred, according to the Marines.

The Navy is flying a P-8A reconnaissance plane to search for the missing Marines. The Japanese Maritime Self-Defense Force and Japanese Coast Guard were also assisting the search.

A KC-130 refueling plane crashed July 10, 2017 in Mississippi, killing 15 Marines and one sailor. That accident was caused by a propeller blade breaking off and slicing into the plane’s fuselage, the Marine Corps announced late Wednesday after a more than a year-long investigation.

Investigators found that the aircraft's propeller was not properly maintained during its last overhaul in September of 2011. Crews missed corrosion that may have contributed to the propeller blade snapping off.

The crash is also the latest in a recent series of accidents involving the U.S. military deployed to and near Japan.

Last month, a U.S. Navy F/A-18 Hornet from the aircraft carrier USS Ronald Reagancrashed into the sea southwest of Japan’s southern island of Okinawa, though its two pilots were rescued safely.

In mid-October, a MH-60 Seahawk also belonging to the Ronald Reagan crashed off the Philippine Sea shortly after takeoff, causing non-fatal injuries to a dozen sailors.

More than 50,000 U.S. troops are based in Japan under the bilateral security pact.