With Republicans deeply divided over providing more aid, Majority Leader McConnell is trying to provide an offramp for GOP senators to avoid a tough vote. 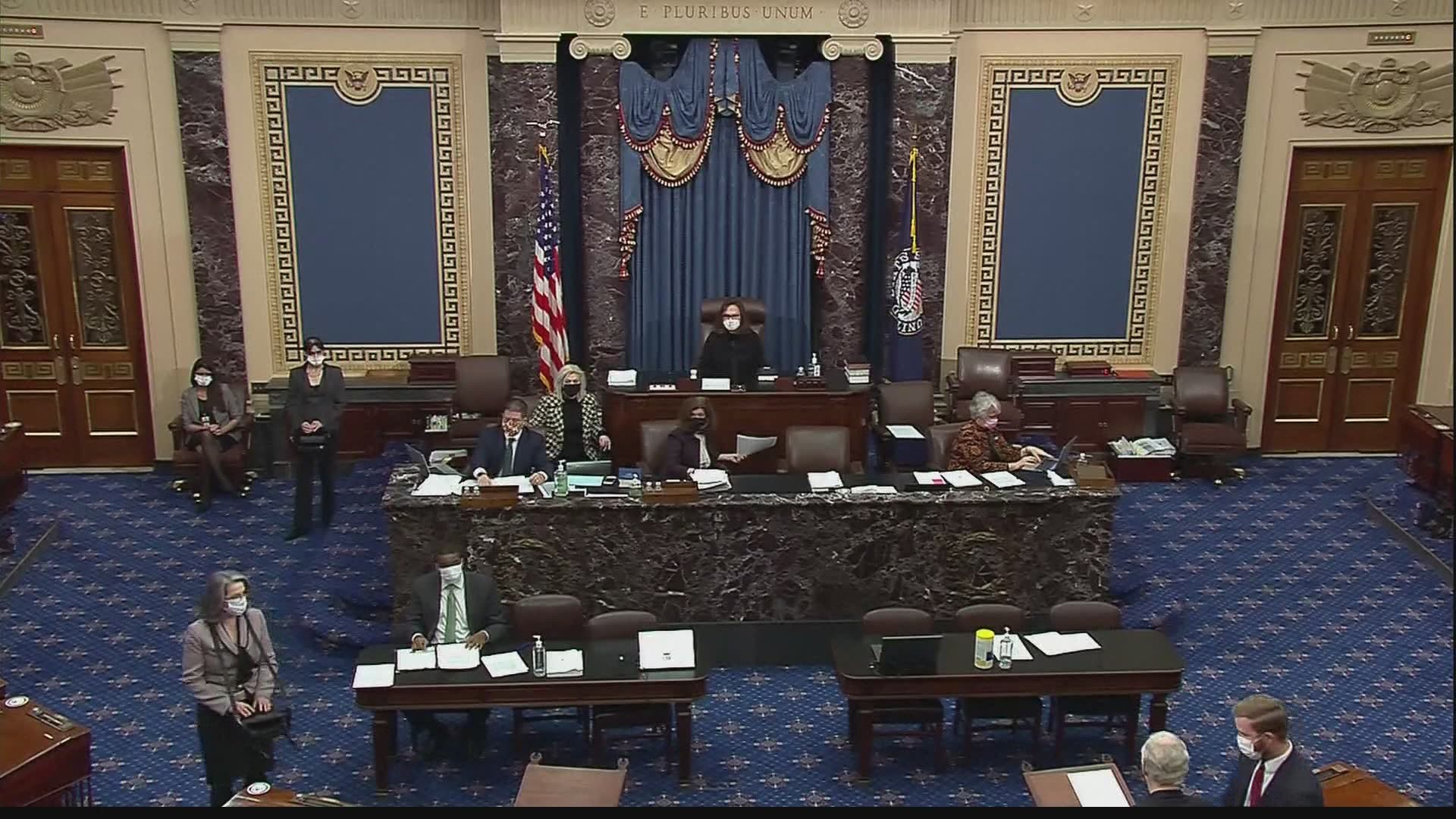 WASHINGTON — Senate Majority Leader Mitch McConnell all but shut the door Wednesday on President Donald Trump's push for $2,000 COVID-19 relief checks, declaring Congress has provided enough pandemic aid as he blocked another attempt by Democrats to force a vote.

The GOP leader made clear he is unwilling to budge, despite political pressure from Trump and even some fellow Republican senators demanding action. Trump wants the recent $600 in aid increased threefold. But McConnell dismissed the idea of bigger “survival checks” approved by the House, saying the money would go to plenty of American households that just don't need it.

McConnell's refusal to act means the additional relief Trump wanted is all but dead.

"We just approved almost a trillion dollars in aid a few days ago," McConnell said, referring to the year-end package Trump signed into law.

The showdown between the outgoing president and his own Republican Party over the $2,000 checks has thrown Congress into a chaotic year-end session just days before new lawmakers are set to be sworn into office.

It's one last standoff, together with the override of Trump’s veto of a sweeping defense bill, that will punctuate the president's final days and deepen the GOP's divide between its new wing of Trump-styled populists and what had been mainstay conservative views against government spending.

Trump has been berating the GOP leaders, and tweeted, “$2000 ASAP!”

President-elect Joe Biden also supports the payments and wants to build on what he calls a “downpayment” on relief.

Senator McConnell and Senate Republicans are the only thing standing between Americans and $2000 survival checks.

Democrats will not stop fighting to help people struggling to keep their jobs, pay their rent, feed their families. pic.twitter.com/5N6KkuZPOT

“In this moment of historic crisis and untold economic pain for countless American families, the President-elect supports $2,000 direct payments as passed by the House," said Biden transition spokesman Andrew Bates.

The roadblock set by Senate Republicans appears insurmountable. Most GOP senators seemed to accept the inaction even as a growing number of Republicans, including two senators in runoff elections on Jan. 5 in Georgia, agree with Trump's demand, some wary of bucking him.

Treasury Secretary Steven Mnuchin said the $600 checks would begin to go out Wednesday. Congress had settled on smaller payments in a compromise over the big, year-end COVID relief and government funding bill that Trump reluctantly signed into law. Before signing, though, Trump demanded more.

For a second day in a row, Senate Democratic leader Chuck Schumer tried to force a vote on the bill approved by the House meeting Trump’s demand for the $2,000 checks.

“What we’re seeing right now is Leader McConnell trying to kill the checks — the $2,000 checks desperately needed by so many American families,” Schumer said.

With the Georgia Senate runoff elections days away, leading Republicans warned that the GOP’s refusal to provide more aid as the virus worsens could jeopardize the outcome of those races.

RELATED: Sen. Hawley says he will object to Electoral College results next week

Georgia’s GOP Sens. David Perdue and Kelly Loeffler are trying to fend off Democrats Jon Ossoff and Raphael Warnock in runoff elections that will determine which party has the Senate majority. The two Republicans announced support for Trump’s call for more generous checks.

“The Senate Republicans risk throwing away two seats and control of the Senate,” Newt Gingrich, the former congressional leader, said on Fox News.

McConnell has tried to shield his divided Republicans from a difficult vote. On Wednesday he suggested he had kept his word to start a “process” to address Trump’s demands, even if it means no votes will actually be taken.

“It’s no secret Republicans have a diversity of views,” he said.

Earlier, McConnell had unveiled a new bill loaded up with Trump's other priorities as a possible off-ramp for the stalemate. It included the $2,000 checks more narrowly targeted to lower-income households as well as a complicated repeal of protections for tech companies like Facebook or Twitter under Section 230 of a communications law that the president complained is unfair to conservatives. It also tacked on the establishment of a bipartisan commission to review the 2020 presidential election Trump lost to President-elect Joe Biden.

If McConnell sets a vote on his bill, it could revive Trump's priorities. But because the approach contains the additional tech and elections provisions, Democrats and some Republicans will likely balk and it's unlikely to have enough support in Congress to pass.

No additional votes on COVID aid have been scheduled at this point. For McConnell, the procedural moves allowed him to check the box over the commitments he made when Trump was defiantly refusing to sign off on the big year-end package last weekend. “That was a commitment, and that’s what happened,” he said.

Liberal senators, led by Bernie Sanders of Vermont, who support the relief boost are blocking action on a defense bill until a vote can be taken on Trump's demand for $2,000 for most Americans.

Sanders thundered on the floor that McConnell should call his own constituents in the GOP leader's home state of Kentucky “and find out how they feel about the need for immediate help in terms of a $2,000 check.”

Other Republicans panned the bigger checks, arguing during a lively Senate debate that the nearly $400 billion price tag was too high, the relief is not targeted to those in need and Washington has already dispatched ample sums on COVID aid.

Sen. Pat Toomey, R-Pa., tweeted that “blindly borrowing” billions “so we can send $2,000 checks to millions of people who haven’t lost any income is terrible policy.”

Considered a longshot, Trump's demand gained momentum at the start of the week when dozens of House Republicans calculated it was better to link with most Democrats than defy the outgoing president. They helped pass a bill raising the payments with a robust two-thirds vote of approval.

As Trump's push fizzles out, his attempt to amend the year-end package — $900 billion in COVID-19 aid and $1.4 trillion to fund government agencies through September — will linger as potentially one last confrontation before the new Congress is sworn in Sunday.

The COVID-19 portion of the bill revives a weekly pandemic jobless benefit boost — this time $300, through March 14 — as well as the popular Paycheck Protection Program of grants to businesses to keep workers on payrolls. It extends eviction protections, adding a new rental assistance fund.

Americans earning up to $75,000 will qualify for the direct $600 payments, which are phased out at higher income levels, and there's an additional $600 payment per dependent child.