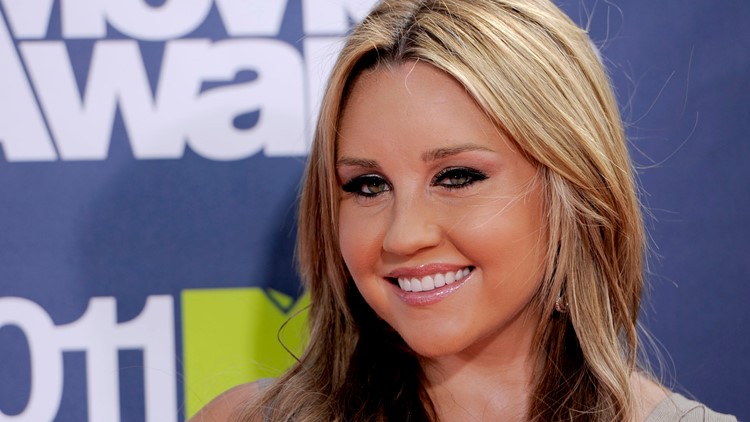 Photo by: AP
FILE - In this June 5, 2011 file photo, Amanda Bynes arrives at the MTV Movie Awards, in Los Angeles. Bynes is due in court Tuesday July 9, 2013 on allegations that she tossed a marijuana bong from the window of her 36th floor Manhattan apartment. The 27-year-old actress is charged with reckless endangerment and attempted tampering with physical evidence. (AP Photo/Chris Pizzello, File)

WASHINGTON — Amanda Bynes has apparently shared a new photo of her fiancé shortly after announcing their engagement.

The actress known for her Nickelodeon channel and teen movie classics had posted an image to Instagram on Friday announcing her engagement to the love of her life. She posted another photo on Saturday of herself and "Lover."

The Valentine's Day post of her and her fiancé's hands show both wearing rings, hers featuring a big, fat rectangular-cut diamond. He had a simple, sleek gold band.

"Engaged to tha love of my life," Bynes, 33, says in the caption. The social media post had more than 34,000 likes Saturday afternoon.

Bynes was a child star in the late 1990s and early 2000s. Her own sketch comedy program "The Amanda Show" and similar series that it spun off from, "All That," were some of her most popular projects. She also starred in films "She's the Man" with Channing Tatum from 2006 and 2003's "What a Girl Wants."

The engagement is sanguine following several years of public struggles for Bynes.

The Today show reports she announced on Twitter in 2014 that she had been diagnosed with bipolar affective disorder and manic-depression.

Two years before in 2012, Bynes was using drugs and had several arrests, CNN reports.

However, she told Paper magazine in 2018 that she has been sober for almost four years and was studying fashion merchandising in Los Angeles.

People magazine reports that although little details are known about Bynes’ new fiancé, a source close to her says the couple met at the end of last year.

RELATED: 'Sex and the City' actress Lynn Cohen dies at 86

RELATED: Jimmy Hoffa confidant who was suspect in disappearance dies at 86