Miami-Dade County's mayor announced Thursday that officials are going through with plans to demolish the building as well. 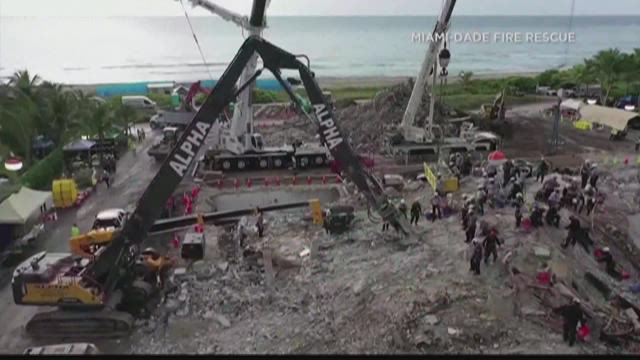 SURFSIDE, Fla. — Officials are proceeding with planning for the likely demolition of the partially collapsed Florida condominium building, the mayor of Miami-Dade County said.

Miami-Dade County Mayor Daniella Levine Cava said at a news conference Thursday that the decision needs to be made “extremely carefully and methodically,” considering the effect of the search and rescue operations as well as the existing debris field.

Rescue efforts at the site resumed Thursday evening, about 15 hours after the work was halted out of concern about the stability of the remaining structure, the mayor said.

Surfside Mayor Charles Burkett said he did not know why officials decided to restart the search. Rescuers left the pile of rubble shortly after 2 a.m. after crews noticed widening cracks and up to a foot of movement in a large column.

"Finding missing loved ones continues to be at the forefront of our operations,” Miami-Dade Fire Rescue tweeted soon after search efforts resumed.

The stoppage threatened to keep search teams off the rubble pile and dim hopes for finding anyone alive in the debris a week after the tower came down.

The collapse of the 12-story Champlain Towers South beachfront condominium killed at least 18 people and left 145 missing. Hundreds of search-and-rescue personnel have painstakingly searched the pancaked rubble for potential signs of life, but no one has been rescued since the first hours after the collapse.

The president, whose remarks were translated into Spanish, urged the families to “never give up hope,” even as the search and rescue operation paused early due to structural concerns with the remaining portion of the building.

Attendees could be seen with tears in their eyes as Biden closed out his remarks, and he and wife, Jill, spent the next few hours visiting privately with the families.

Biden, responding to what appeared to be the deadliest calamity of his young presidency, also met first responders hunting for survivors in the rubble in Surfside before the pause in the search.

The Bidens arrived in Florida a week after the collapse of the 12-story Champlain Towers South beachfront condominium killed at least 18 people and left 145 missing. Hundreds of first responders and search-and-rescue personnel have been painstakingly searching the pancaked rubble for potential signs of life. No one has been rescued since the first hours after the collapse.

“This is life and death," Biden said at a briefing from officials about the collapse. “We can do it, just the simple act of everyone doing what needs to be done, makes a difference."

The president said he believed the federal government has “the power to pick up 100% of the cost” of the search and cleanup and urged local officials to turn to Washington for assistance.

“You all know it, because a lot of you have been through it as well," Biden said. "There’s gonna be a lot of pain and anxiety and suffering and even the need for psychological help in the days and months that follow. And so, we’re not going anywhere.”

Biden was briefed on the situation with Florida Gov. Ron DeSantis and Miami-Dade County Mayor Daniella Levine Cava, as well as the state's two Republican senators, Marco Rubio and Rick Scott. The mayor, a Democrat, saluted the efforts to cross party lines in an "unprecedented, devastating disaster” and said the unified government and community response “is what gives us hope.”

DeSantis, a rumored Republican 2024 presidential candidate, told Biden the “cooperation has been great," declaring that the administration has "not only been supportive at the federal level, but we’ve had no bureaucracy.”

As Biden pledged federal help and pointed to the bipartisan nature of the response, he touched DeSantis' hand to underscore the point.

“You know what’s good about this?” Biden asked. “It lets the nation know we can cooperate. That’s really important."

Biden then met first responders who worked around the clock on a rescue effort that has stretched into its second week in oppressive heat and humidity and frequent summer storms.

“What you’re doing here is incredible, having to deal with the uncertainty," said Biden, as he offered profuse thanks to those who have been working at the site.

Biden has received regular updates on the building collapse. He also sent FEMA Administrator Deanne Criswell to the area for a tour of the site earlier this week with DeSantis.

“This is life and death,” Biden said during a briefing. “We can do it, just the simple act of everyone doing what needs to be done, makes a difference.”

“There’s gonna be a lot of pain and anxiety and suffering and even the need for psychological help in the days and months that follow," he said. "And so, we’re not going anywhere.”

Rescue work was halted after crews noticed several expansions in cracks they had been monitoring. They also observed 6 to 12 inches of movement in a large column hanging from the structure “that could fall and cause damage to support columns" in the underground parking garage, Miami-Dade Fire Rescue Chief Alan Cominsky said.

In addition, they noticed movement in the debris pile and slight movement in some concrete floor slabs “that could cause additional failure of the building,” he said.

Officials will work with structural engineers and other experts to “develop options” to continue rescue operations, Cominsky said.

Critical points around the site have been monitored with sensors since the rescue operation began, said Scott Nacheman, a structures specialist with the Federal Emergency Management Agency. He said there were alarming indications of movement Wednesday night at three locations.

“What was of specific concern was that over the last six days we had not seen that type of significant movement, or in some locations any movement in those elements of the structure,” Nacheman said Thursday during a briefing for family members.

Rescuers also use laser devices that can detect shifts of a few millimeters, Cominsky said.

“We are constantly monitoring the building,” he said.

Heavy equipment in the rubble pile caused vibrations, according to Nacheman. Rain has also been entering exposed parts of the building, saturating items and adding weight to the floors.

Covering parts of the structure to prevent further water damage or tearing down the building risks additional loss of life because those steps would require sending people back inside, Nacheman said. Demolition would also add debris on top of areas that have already been cleared of rubble.

Peter Milián is a cousin of Marcus Guara, who died along with his wife, Anaely Rodriguez, and their two children, 10-year-old Lucia Guara and 4-year-old Emma Guara. Milián said he understands why the rescue work had to be temporarily halted and is confident search efforts will continue.

“I mean, they’ve done everything they can. But we trust the people that are on the ground. And obviously, they’ve got to do what’s best for their people, right? Because it is a dangerous situation,” he said.

During a private meeting with family members, Biden drew on his own experiences with grief to try to comfort them. Biden lost his first wife and baby daughter in a car crash and decades later lost an adult son to brain cancer.

“I just wish there was something I could do to ease the pain,” he said in a video posted on Instagram by Jacqueline Patoka, a woman who was close to a couple and their daughter who are still missing.

Biden spoke of wanting to switch places with a lost or missing loved one. “The waiting, the waiting is unbearable,” he said.

Miami-Dade County Mayor Daniella Levine Cava said the search-and-rescue operation will continue as soon as it is safe to do so.

Gov. Ron DeSantis said state engineers, the fire department and county officials are exploring options on how to deal with the structural concerns.

“Obviously, we believe that continuing searching is very, very important,” DeSantis said, adding that the state will ”provide whatever resources they need" to allow the search to continue.

Cominsky confirmed Thursday that workers tried to rescue a woman shortly after the building collapsed when they heard a voice in the rubble.

“We were searching for a female voice ... we heard for several hours, and eventually we didn't hear her voice anymore,” he said.

Cominsky said they continued searching. “Unfortunately, we didn't have success on that,” he said.

The cause of the collapse is under investigation. A 2018 engineering report found that the building's ground-floor pool deck was resting on a concrete slab that had “major structural damage” and needed extensive repairs. The report also found “abundant cracking" of concrete columns, beams and walls in the parking garage.

Just two months before the building came down, the president of its board wrote a letter to residents saying that structural problems identified in the 2018 inspection had “gotten significantly worse” and that major repairs would cost at least $15.5 million. With bids for the work still pending, the building suddenly collapsed last Thursday.