Gruden reportedly resigned as head coach of the Las Vegas Raiders after reports of emails in which he allegedly used homophobic and misogynistic language. 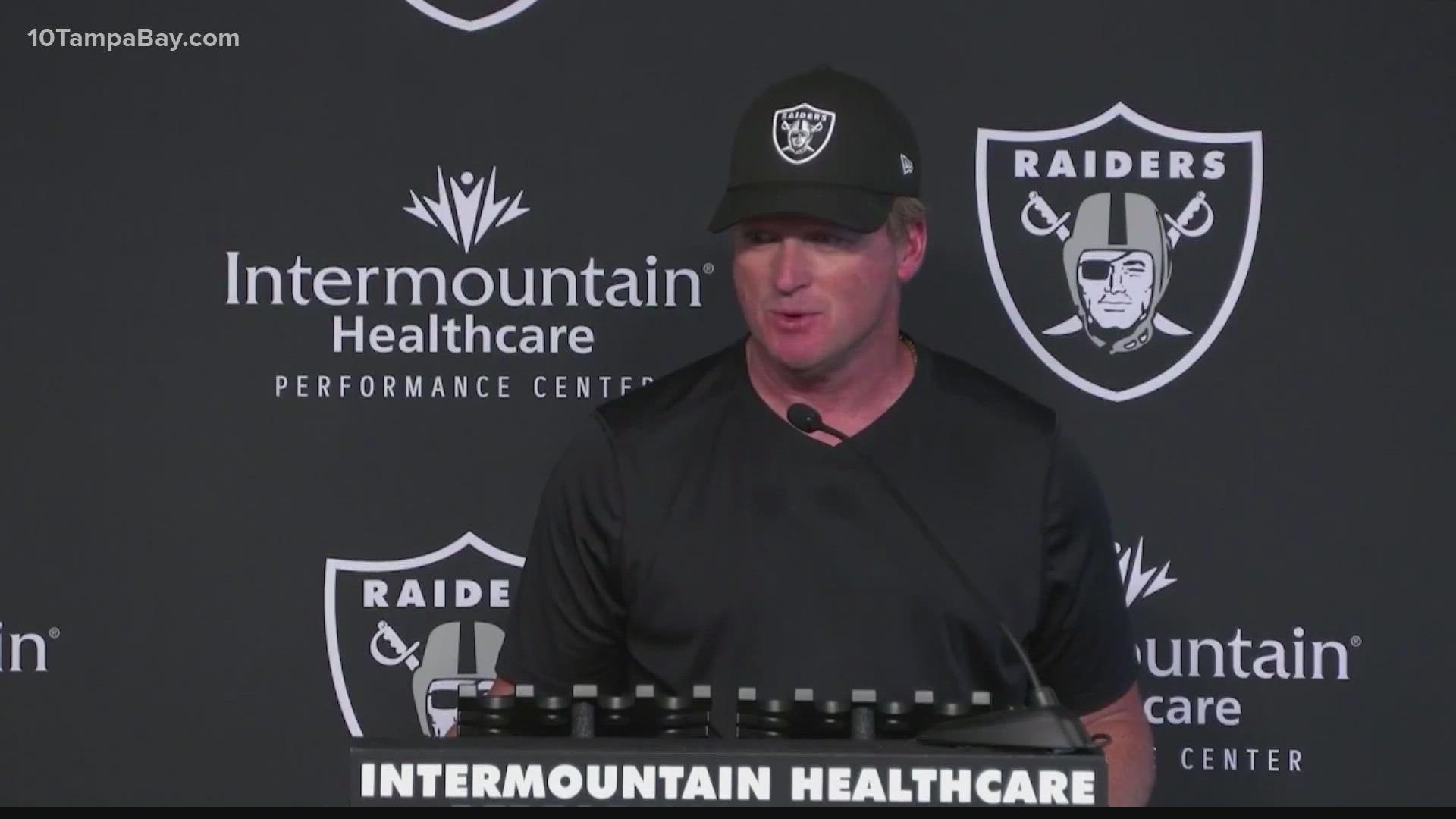 LAS VEGAS — ESPN and NFL Network report Jon Gruden is out as Las Vegas Raiders head coach after a new report says he used misogynistic and homophobic language directed at Commissioner Roger Goodell and others in the NFL, according to emails reviewed by The New York Times.

Those emails revealed many of the comments were sent to friends and colleagues he met during his years as a head coach for the Tampa Bay Buccaneers.

The NFL obtained the emails that Gruden apparently sent to Bruce Allen, the former president of the Washington Football Team and former general manager of the Tampa Bay Buccaneers, in a separate investigation of workplace misconduct regarding that franchise.

Gruden's connection with Allen goes back to his first coaching stint with the then Oakland Raiders between 1998 and 2001. Allen was an executive during that period of time.

Gruden would leave Oakland to coach the Tampa Bay Buccaneers from 2002 and 2008, winning a Super Bowl in that tenure. Allen would join him as general manager in 2003.

During Gruden's time as an analyst for "Monday Night Football," he and Allen would send emails back and forth calling NFL executives homophobic slurs, the New York Times reports. The newspaper says one of Gruden's old emails asked Bruce Allen, ex-president of the Washington Football Team, to tell Bryan Glazer — whose family owns the Bucs — to give him oral sex.

10 Tampa Bay reached out to all three men independently. No one has returned our calls yet.

Hooters was founded in Clearwater in 1983 and according to a 2012 news release, Gruden was a "wing shaker and oyster shucker at the West Hillsborough Avenue Hooters location in Tampa, Fla."

He was also in a commercial for Hooters in 2012.

The first PDQ restaurant opened in Tampa in 2011. Gruden was in a 2017 promotional video for them highlighting a partnership to support high school football programs.

A 2016 tweet from the Outback Bowl shows Gruden and Bruce Allen together on stage at an Outback Bowl event, a college football game played on New Year's Day in Tampa for the past 34 years.

The exposing of the insensitive emails from Gruden comes just days after it was revealed Gruden made a racist comment about the executive director of the NFL players union in 2011.

Monday evening after Gruden's departure from the Las Vegas Raiders was announced, the now-former head coach released a statement.

"I have resigned as Head Coach of the Las Vegas Raiders. I love the Raiders and do not want to be a distraction. Thank you to all the players, coaches, staff, and fans of Raider Nation. I’m sorry, I never meant to hurt anyone."

The Wall Street Journal reported Friday that Gruden used a racist comment to describe NFL Players Association leader DeMaurice Smith. Now, the latest emails reported by the Times showed Gruden denounced the drafting of a gay player and the tolerance of players protesting during the playing of the national anthem among other issues.

Gruden has apologized for his “insensitive remarks” about Smith, saying they were made out of frustration over the 2011 lockout. But the latest emails sent from between 2011-18 when Gruden was an analyst for ESPN show his use of derogatory language went well beyond that.

Raiders owner Mark Davis said last week that the email about Smith was “disturbing and not what the Raiders stand for" and said the team was reviewing the additional emails.

The Times reported that Gruden used a gay slur to insult Goodell and said he was “clueless” and “anti-football.” He also said Goodell shouldn't have pressured the Rams to draft “queers," a reference to Michael Sam, who was the first openly gay player drafted by an NFL team.

Raiders defensive end Carl Nassib came out as gay in June and is the first openly gay player to appear in an NFL game.

In a 2017 email, the Times said Gruden responded to a sexist meme of a female official by saying: “Nice job roger.”

The paper also said Gruden criticized Goodell and the NFL league for trying to reduce concussions and said that Eric Reid, a player who had demonstrated during the playing of the national anthem, should be fired.

The newspaper said Gruden also mocked an article in 2017 about players calling on Goodell to support their efforts promoting racial equality and criminal justice reform.