In collapsed building's twin, most residents are staying put

Inspectors performed a quick-hit examination of the north building and the city's mayor said nothing was found that indicates the tower is in danger of collapse. 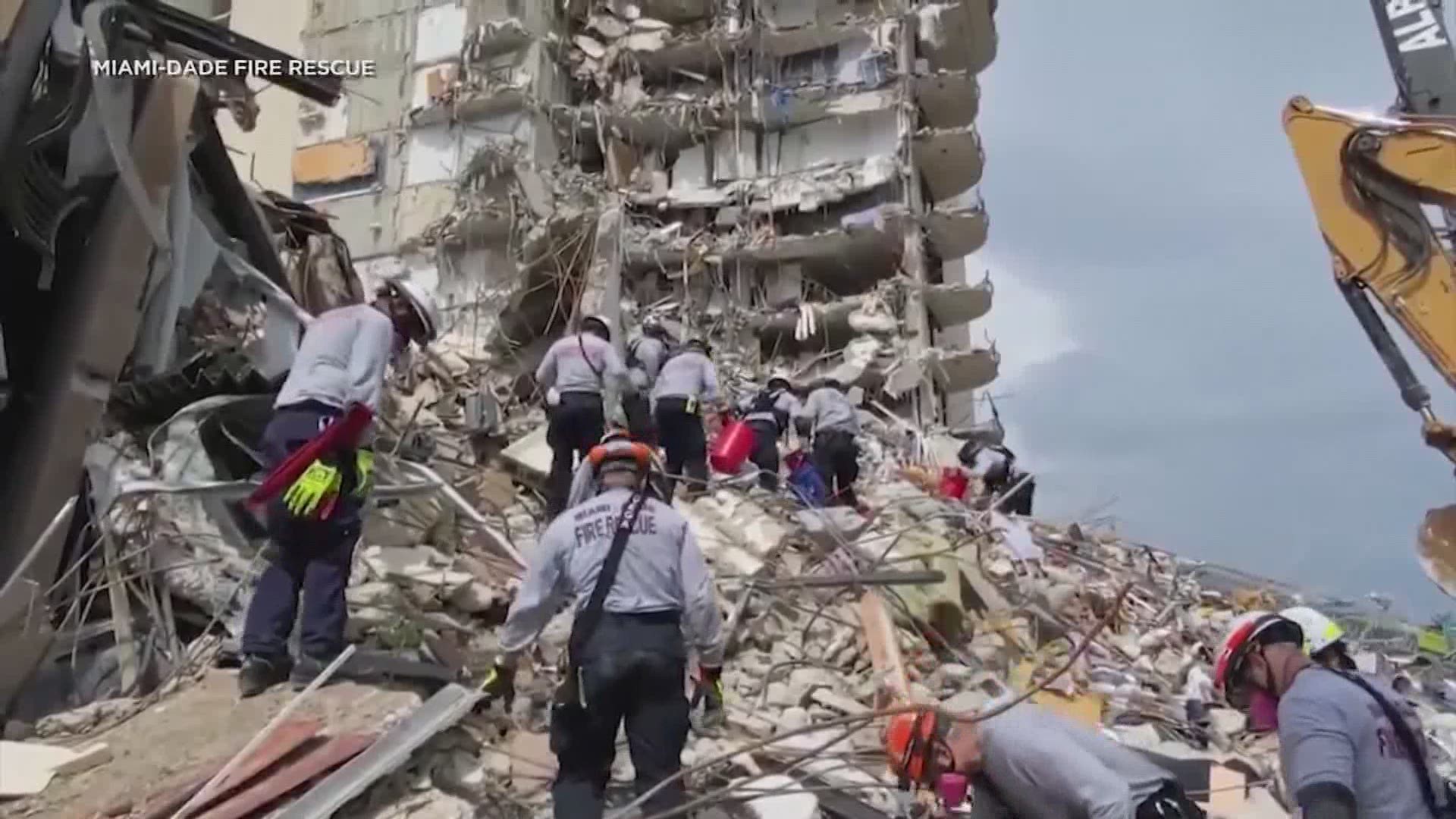 SURFSIDE, Fla. — About a block from the Miami-area beachfront condominium tower that collapsed sits its sister building, erected a year later by the same company, using the same materials and a similar design. It has faced the same tides and salty air.

This has made some residents of Champlain Towers North worried enough to leave, though most have remained, saying they are confident their almost 40-year-old, 12-story building is better maintained. They say their building doesn't have the same problems with cracking in support beams and in the pool area that 2018 engineering reports show the south tower had.

The collapse of Champlain Towers South in the town of Surfside on Thursday has drawn attention to older high-rise buildings throughout South Florida and prompted Miami-Dade Mayor Daniella Levine Cava to order a 30-day audit of whether such buildings under her jurisdiction are complying with a required recertification of structural integrity at 40 years. She said she wants any issues raised by inspections to be immediately addressed. She’s also urged municipalities within the county to follow suit. Miami, for example, has launched a 45-day audit of buildings six stories and higher that are 40 years old or older.

Inspectors performed a quick-hit examination of the north building and Surfside Mayor Charles Burkett said nothing was found that indicates the tower is in danger of collapse.

That didn't reassure everyone.

“I'm petrified of returning,” said Rebecca Weinstock, a snowbird who bought a sixth-floor condo in the north building four years ago with her husband. She is in New York, where she was when the south tower collapsed early Thursday, killing at least 11 people and leaving 150 missing.

While she agrees the north building is well maintained, she said that's not enough to satisfy her that it's completely safe. It was completed in 1982, one year after the south tower, and built by the same developer, Nathan Reiber, through his firm, Nattel Construction. The possibility that the collapse was caused by a design or construction flaw means she won't be returning anytime soon.

North tower residents who want to temporarily relocate are being offered federal assistance, just as survivors from the south tower are.

Credit: AP
A jet ski rides by as rescue workers search in the rubble for survivors at the Champlain Towers South condominium, Saturday, June 26, 2021, in the Surfside area of Miami. The building partially collapsed on Thursday. (AP Photo/Lynne Sladky)

But most residents interviewed Monday are taking the position of Philip and Nora Zyne, who are staying put in their fifth-floor condo. The Zynes bought their condo 12 years ago, and have lived there full time for six. They have several friends and acquaintances who lived in the south tower and remain missing.

“I’ve never seen any major structural issues" in the north building, said Philip Zyne, an attorney. “I’m not worried at all right now. I do want to get a full structural engineering and forensic examination done.”

Zyne said he’s seen numerous inspectors in his building since the collapse, and only a small number of people packing up to go.

“It’s not a mass exodus by any means. I’d say maybe a quarter of the building has left," he said.

Salomon Gold, who spent 10 years as the condo association president for the north tower and 20 on the board, is convinced the building is safe, saying he and the other board members never skimped on maintenance. He compared the building collapse to airplanes: Just because one crashes doesn't mean others of that same make and model will.

Surfside Mayor Burkett said a deep-dive inspection of the north tower will be conducted Tuesday by an engineering firm hired by the residents. The town will inspect other older buildings soon. Given the results of the preliminary examination of the north tower, he said he doesn't see a reason to order an evacuation. Still, he said, he's not sure he would stay there.

“If you asked me if I wanted to spend the night in that building, I’d be a little ... I wouldn’t be willing to do that until we went through it,” he said.

“My mother-in-law is bedridden, so we took her out and brought her to our house,” Drachman said. “We just felt like we couldn’t get her out in five minutes” if a rapid evacuation became necessary.

Drachman said her mother-in-law wasn’t worried or very aware of the details of the disaster. She said she and her husband are waiting to see if a thorough inspection turns up any problems.

“We’ll see if that building’s fine,” Drachman said. “And if it is, we’ll put her back in.”