While people have expressed concern about crane remnants over Canal Street and on Rampart Street, officials say this is the safest the building has been in days. 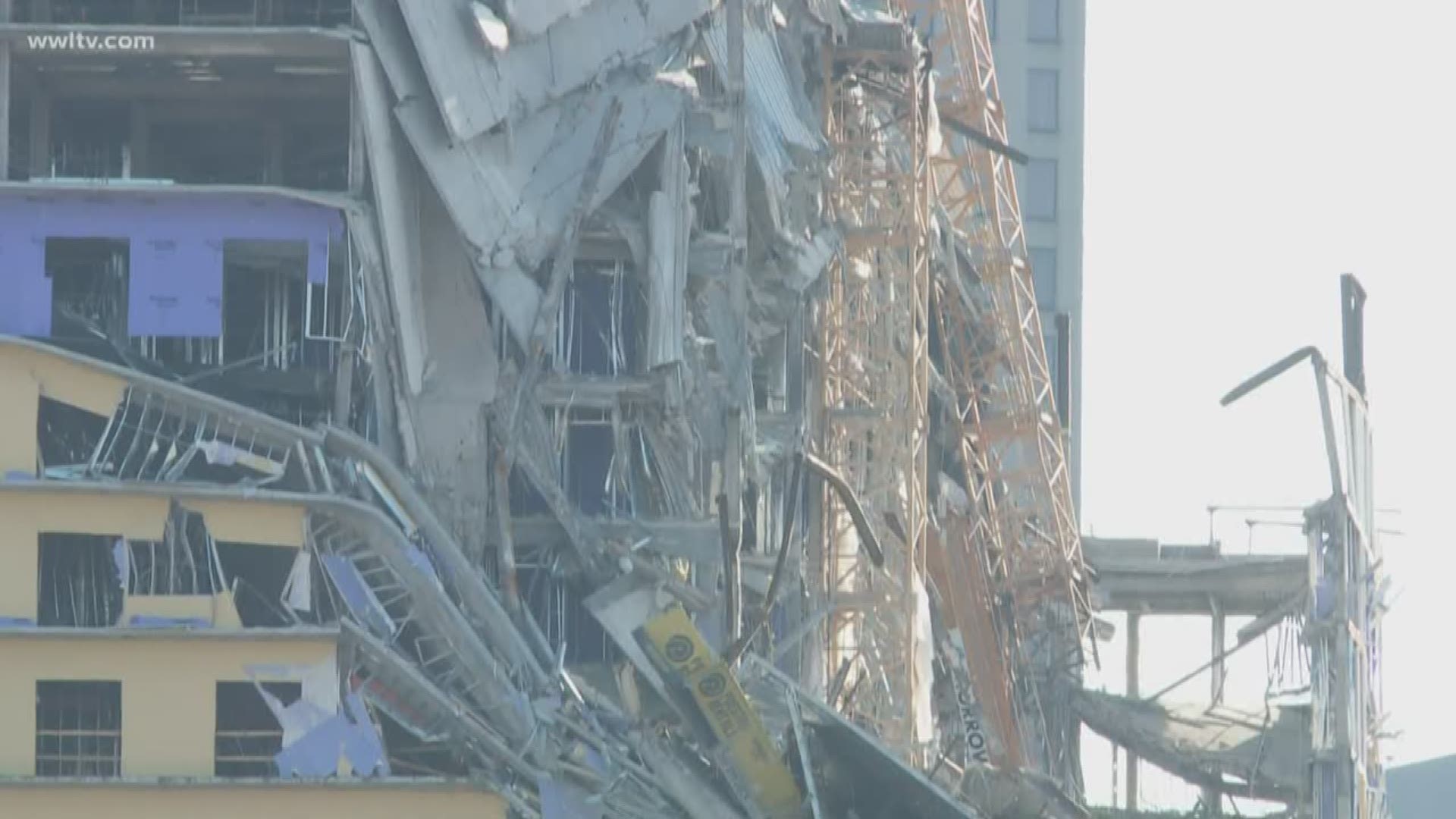 The fiery afternoon explosions sent up massive clouds of dust and sent one crane crashing to Rampart Street while the second fell in a way that left much of it resting atop the hotel where officials said it was "stable" and could be removed piecemeal.

"We know that we are safer now than we have been in the past eight days," Mayor LaToya Cantrell said.

Cantrell says she expects a partially collapsed hotel will ultimately be demolished.

A temporary evacuation zone in Downtown New Orleans was reduced Sunday night, allowing visitors and locals to return to their homes and hotels.

Cantrell says the first mission now that the cranes have been toppled is to remove the last two bodies from the rubble. She said a monitor had been placed near one of the bodies before the crane demolition so they would know where to locate it, and the demolition didn't seem to affect the areas where the bodies were.

After the bodies are removed, Cantrell says, the building will ultimately be demolished. Says the mayor, "Let me be very clear. The expectation and the next mission after we remove our people from the site will be full demolition."

Already, workers were beginning to remove rubble from the streets shortly after the blasts, and engineers were going through the building to assess the situation as a drone flew overhead for an aerial view.

Authorities cautioned that the building remains dangerous and unstable though it did not collapse further with Sunday's demolition.

It was a little more than a week ago — Oct. 12 — that the Hard Rock Hotel that was under construction near the historic French Quarter partially collapsed. Three workers died that day when several floors of the multistory building pancaked. Only one body has been removed so far. The bodies of  63-year-old Jose Arreola and 36-year-old Quinnyon Wimberly remain inside.

The cranes — one around 270 feet high, the other about 300 feet — weighed thousands of tons and were badly damaged in the collapse. They had been tilting dangerously, and officials had feared the towers would come down on their own, possibly smashing into nearby buildings or severely damaging underground gas and electric lines.

But once the dust had cleared Sunday, it appeared that none of those worst-case scenarios came to pass. The mayor said three windows at the historic Saenger Theater across the street were damaged but they hadn't received reports of other buildings damaged.

A sewer line was damaged as well, but the mayor said padding that was designed to protect the gas and electric lines — a major concern — worked as expected.

"I do not think it could have gone much better," said Fire Chief Tim McConnell, flanking the mayor.

He added that one crane fell and got "hooked on the building like we wanted. It's very stable." He said "it's way better than what it looks" because of the way it is resting, adding it would now be cut away in pieces by workers using another crane and taken away.

Since the building collapsed, the towering cranes had been the focus of officials' concern. Experts, including engineers who worked on demolitions following the 9/11 terrorist attacks, were called in to try to devise a plan before the cranes fell on their own.

The cause of the collapse remains unknown. The Occupational Health and Safety Administration and police are investigating and, officials said evidence gathering began soon after the collapse.

RELATED: Updates: Cranes come down - 'Could not have gone much better'