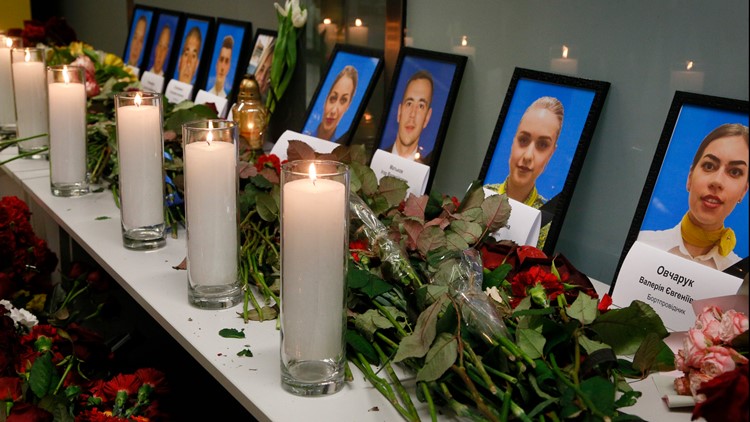 Photo by: AP
Flowers and candles are placed in front of portraits of the flight crew members of the Ukrainian 737-800 plane that crashed on the outskirts of Tehran, at a memorial inside Borispil international airport outside Kyiv, Ukraine, Wednesday, Jan. 8, 2020. A Ukrainian airplane carrying 176 people crashed on Wednesday shortly after takeoff from Tehran's main airport, killing all onboard, Iranian state TV and officials in Ukraine said. (AP Photo/Efrem Lukatsky)

TEHRAN PROVINCE, Iran — Did Iran shoot down the Boeing 737 that crashed shortly after takeoff on Wednesday?

“US officials are confident Ukrainian Flt 752 was shot down by Iran. US intelligence picked up signals of the radar being turned on & satellite detected infrared blips of 2 missile launches, probably SA-15s, followed shortly by another infrared blip of an explosion,” tweeted Van Cleave.

All 176 people on Ukrainian Airlines flight 752 were killed in the crash.

The plane was heading from Tehran to Kyiv with 82 Iranians, 63 Canadians and 11 Ukrainians on board.

Pentagon officials tell Fox News the passenger jet was shot down by accident.

The Washington Post reports that independent aviation experts said it appears the plane broke apart in mid-air before plummeting to the ground. Iranian investigators had said witnesses reported seeing the plane on fire, according to the Post.

The New York Times says Ukrainian investigators are looking into reports that fragments from a Russian-made surface-to-air missile had been found near the crash site.

According to the Times, that’s a type of weapon the Iranians have access to.

Debris is seen from a plane crash on the outskirts of Tehran, Iran, Wednesday, Jan. 8, 2019. A Ukrainian airplane carrying at least 170 people crashed on Wednesday shortly after takeoff from Tehran’s main airport, killing all onboard, state TV reported. (AP Photos/Mohammad Nasiri)
AP

President Trump told reporters Thursday he does not believe a mechanical issue caused the crash.

"I have my suspicions. It was very – I don't want to say that because other people have their suspicions also," President Trump said.

A spokesman for the Iranian armed forces calls any suggestion of foul play "psychological warfare."

“The rumors about the plane are completely false and no military or political expert has confirmed it,” Gen. Abolfazl Shekarchi said, according to the Associated Press.

The Associated Press is reporting Ukrainian President Volodymyr Zelensky called on Thursday for a "full, credible and transparent investigation into what happened."

The crash came just a few hours after Iran launched a ballistic missile attack against Iraqi military bases housing U.S. troops amid a confrontation with Washington over a U.S. drone strike that killed an Iranian Revolutionary Guard general.

People look at a memorial at Borispil international airport outside in Kyiv, Ukraine, Thursday, Jan. 9, 2020, for the flight crew members of the Ukrainian 737-800 plane that crashed on the outskirts of Tehran. The crew of a Ukrainian jetliner that crashed in Iran, killing all 176 people on board, never made a radio call for help and was trying to turn back for the airport when the burning plane went down, an initial Iranian investigative report said Thursday. (AP Photo/Efrem Lukatsky)
AP