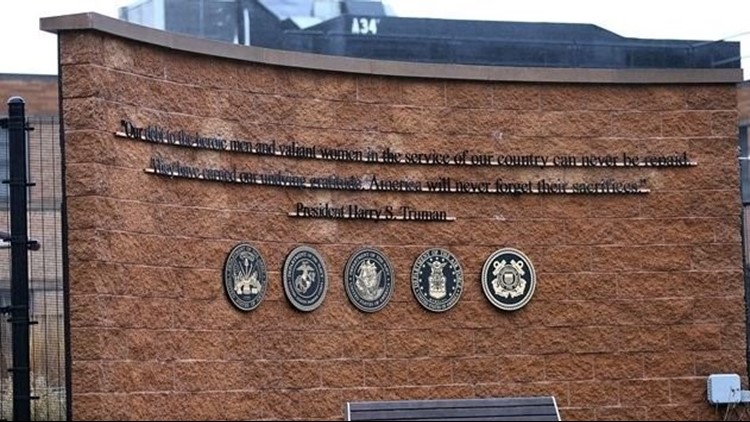 A wall next to the VA nursing home in Brockton, Massachusetts, known as the Community Living Center, Building 4, on Nov. 13, 2018.

BOSTON – Staffers at the Department of Veterans Affairs nursing home in Brockton, Massachusetts – rated among the worst VA nursing homes in the country – knew this spring they were under scrutiny and that federal investigators were coming to visit, looking for signs of patient neglect.

Still, when investigators arrived, they didn’t have to look far: they found a nurse and a nurse’s aide fast asleep during their shifts. One dozed in a darkened room, the other was wrapped in a blanket in the locked cafeteria.

The sleeping staffers became a focal point of a new, scathing internal report about patient care at the facility, sparked by a nurse’s complaint that veterans were getting substandard care, according to a letter sent late last month to President Donald Trump and Congress by the agency that protects government whistleblowers.

“We have significant concern about the blatant disregard for veteran safety by the registered nurses and certified nurse assistants,” agency investigators wrote in a report about the 112-bed facility. The Brockton facility is a one-star nursing home, the lowest rating in the agency’s own quality ranking system.

The problems at the Brockton nursing home are the latest to surface in a review of VA nursing home care by USA TODAY and The Boston Globe.

In June, the news organizations revealed the VA’s secret quality ratings showed that care at more than 100 VA nursing homes across the country scored worse than private nursing home averages on a majority of key quality indicators last year.

In response to questions from USA TODAY and the Globe, the VA released nursing home ratings that had been kept secret for years, potentially depriving veterans and their families of crucial healthcare information.

At the time, the VA said it was releasing inspection reports the agency has withheld from the public for nearly a decade. But five months later, none has been released.

VA spokesman Curt Cashour told USA TODAY that the agency is working with an outside contractor to remove patient information from reports. He said the VA expects to release "publicly redacted versions of the most recent reports" around Christmas.

That's not good enough for Leslie Roe, whose husband of 38 years walked out of a supposedly secure unit at the VA nursing home in Tuskegee, Alabama, last year and was never found.

Roe, who had Navy veteran Earl "Jim" Zook declared dead earlier this year, wants the VA to immediately release three years' worth of inspection reports – the standard for private-sector nursing homes whose reports are posted on a federal web site, NursingHomeCompare.

"It's just a shame the way the VA is," she said. "It can't help Jim, but maybe it can help just one other person."

The reports can include incidents of poor care and conditions that can be a tip-off to prospective or current residents and their families about problems with staffing or neglect at a facility.

"What are they hiding? Why wouldn’t you release it," said Amy Leise, whose uncle Vietnam veteran Don Ruch suffered from malnutrition and bed sores last year at a VA nursing home in Livermore, California.

"It feels like the government is immune from accountability and responsibility, where in other settings that wouldn't be the case," she said.

In the meantime, the VA has released an updated set of star ratings. They show 45 of its nursing homes received the lowest one out of five stars for quality as of June 30. That’s down from 58 in March. The VA has 133 nursing homes that serve 46,000 infirm veterans each year across the country.

The Brockton whistleblower, licensed practical nurse Patricia Labossiere, complained to a federal whistleblower agency, the Office of Special Counsel, earlier this year, after supervisors ignored her alerts, she said.

“I am a no-nonsense nurse who took a vow to take care of patients,” said Labossiere, who quit in July. “We are there to be kind and treat others as we would want to be treated. I could not believe that this was how we treat the people that fought for our country.”

Labossiere said she saw instance after instance of poor patient care at the facility within days after she started working there last December. She told the federal whistleblower agency that nurses and aides were not emptying the bedside urinals of frail veterans. Nurses failed to provide clean water at night and didn’t check on the veterans regularly, as required, she said. And they often slept when they were supposed to be working.

She offered some specific examples: one patient was having trouble breathing because his oxygen tank was empty. Another fell – his feeding tube got disconnected and the liquid splashed onto the floor – and didn’t appear to have been monitored by staffers for hours.

The VA investigators did not substantiate those specific allegations, saying the patient with the empty oxygen tank suffered no ill effects. Investigators couldn’t confirm that the patient who fell had been neglected because the records had been shredded “in accordance with the local policy.”

Wahl, the VA spokeswoman, noted that the investigators “did not find evidence of veteran harm or neglect.” She said the facility’s one-star rating is undeserved and not an “accurate reflection of the quality of care delivered to our patients."

The Office of Special Counsel ordered the VA’s Office of Medical Inspector to investigate Brockton following Labossiere’s complaint. The office turned over its report in September to Special Counsel Henry J. Kerner, who sent the findings to Trump and Congress on October 23.

“Because a brave whistleblower came forward, VA investigators were able to substantiate that patients at the Brockton (nursing home) were routinely receiving substandard care,” Kerner said in an emailed statement.

This is not the first time the Brockton facility has come under fire by the Office of Medical Inspector.

In 2014, a doctor at the nursing home alleged that three veterans with significant mental health issues received “inappropriate medical and mental health care.”

Two of them went years, he alleged, without appropriate treatment. A third allegedly received psychotropic drugs for more than two years against written instructions.

Investigators largely substantiated the allegations, finding that two veterans with significant psychiatric issues did not receive adequate treatment for years. They did not substantiate the allegation that a third received improper medication.