Grandmother, dad of man who murdered his children ask for his life to be spared

Tim Jones Jr. faces the death penalty in a South Carolina courtroom for killing his five children in 2014 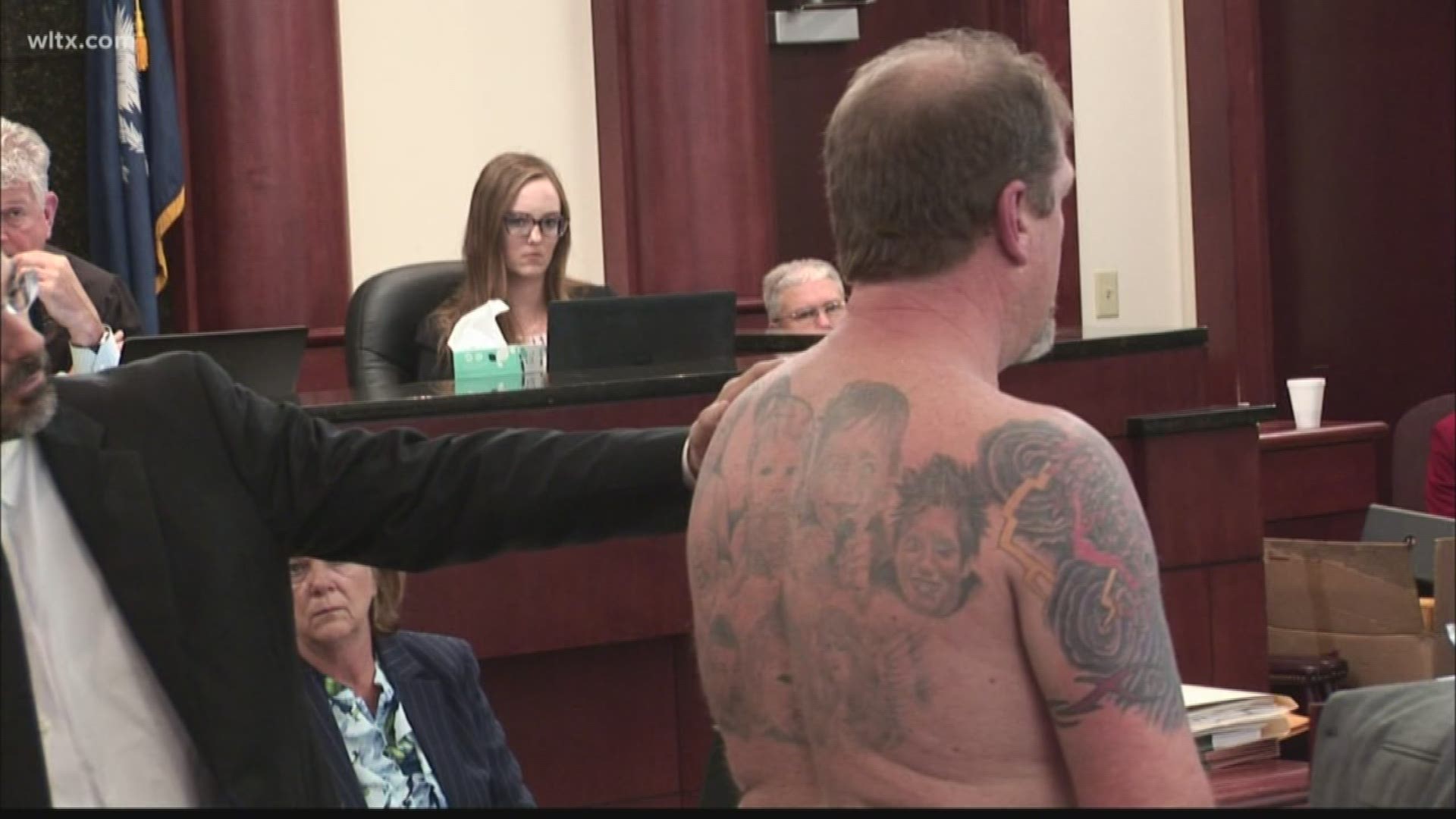 LEXINGTON, S.C. — The grandmother and father of the man who killed all five of his children pleaded for jurors to spare his life, as the panel continues to decide what punishment to hand down.

Defense attorney Casey Secor showed family photos provided by Thornsberry and asked her to describe them. There were photos of Tim Jr growing up at her house (she helped Tim Sr raise the boy after his mother Cynthia left) and on family vacations, some with the great grandchildren.

She described Tim Jr as a very happy little boy who called her “mom.” She testified that when he was growing up, Tim Jr liked to pretend he was Spiderman, enjoyed swimming, going to the park, and dressing up and go out with his father Tim Sr. The family went camping Whitewater, WI.

Tim Jr went through spells she thought was him just being a kid; but when he went to prison, she wrote him every day (or sent a card) and talked to him twice a week, a regular call on Sunday.

There were two photos of Thornsberry, her husband and all 5 Jones kids in Atlanta in early August 2014. The occasion would be the last time anyone in the family — other than Tim Jr — would see the children alive.

The defense team has Thornsberry there to testify as a victim in the case. She is asked how the deaths of her great grandchildren have impacted her. She replies: “It’s devastating. You wouldn’t know if you haven’t lost a child or grandchild. There are constant reminders. It's horrible — the part of you that’s taken away that you can’t get back.

RELATED: SC father guilty on all murder counts for killing his 5 children

Secor asks her “do you want Tim Jr put to death?”

“God no,” she says. “The family been through enough. The toll would be the final nail in the coffin … we still love Tim.”

On cross examination, Solicitor Rick Hubbard asked about Sept 2012 — the last time Tim brought the great grandchildren to her house, he got into an argument with Tim Sr, packed up the kids and never came back.

He asked, no one in family went to SC to see the kids? She said no.

The Atlanta trip was a one-night visit and you offered to take the babies? Yes. But, she testified, Tim told her “I can’t live without my babies, grandma.”

Did she have any knowledge of the May 2014 DSS report about Nahtahn? No

Hubbard reminded Thornsberry that she had previously described Tim Jr testified before as selfish and stubborn; that he cut off father after December 2012 incident; that the only reason to visit was that Sr was going to apologize, Jr wouldn’t have planned trip otherwise.

He asked is she didn’t notice Jones was harder on Nahtahn or that Merah had initially wanted to live with Amber but changed mind later?

He asked if she didn’t know Merah was begging for her life? Thornsberry, in tears, says no.

Hubbard finishes with “Tim was so selfish he took her life.”

Secor gets the last word and tries to reiterate that others in the family have suffered from substance abuse and physical abuse and that is what Jones (and Jones Sr) was around when he was young.

Defense attorney Casey Secor shows the court photos and has Jones Sr describe them — family photos including photos of Tim Jr’s mom Cynthia (they knew each other 18 months before Cynthia got pregnant with Tim Jr — she was 19), Cynthia and an infant Tim Jr, Tim Sr and infant Tim Jr., and other photos of father and son throughout the boy’s childhood.

There is a brief discussion of Tim Jr’s childhood before the court is shown photos of Jones Sr with his grandchildren — Abigail Elaine, 1; Gabriel, 2; Nahtahn, 6; Elias, 7; and Merah Gracie, 8.

Jones Sr says he took down the swimming pool in his back yard “because to hurts too much.”

“Feels like hell,” he says tearing up. “I don’t know how to explain it. It changed my whole world, I don’t sleep.”

He testifies that when he got the call from the Smith County Sheriff, he went there to help and doesn’t regret his decision to help law enforcement. He did everything he could to try to find the babies.

Credit: tglantz@thestate.com
Defense attorney Casey Secor points out the tattoos Tim Jones Sr. he has gotten on his back since the grandchildren were killed in 2014, during the sentencing phase of the trial of his son, Tim Jones in Lexington. Timothy Jones, Jr. was found guilty of killing his 5 young children in 2014.

Secor asks Jones, Sr. how did he personally memorialize the babies? Tim Sr got his back tattooed with the children’s faces. He shows his tattoo to the jury — it also has images of his dead sister Elaine and one of his other sons.

When asked if he wants Tim to die, the father says,”I love him so much… I don’t want him to hurt anymore. Its destroyed my family.”

He testifies that he struggles with guilt for the babies and his son.

On cross, Hubbard says that through the chaos in his house, Jones Sr made sure Tim Jr knew he was loved; made sure he did well in school, was clothed and fed and he spent as much time as he could with Tim Jr.

For whatever things were going on in that world, Tim Jr had a father that loved him. Sr agrees with Hubbard’s assessment that his son didn’t always reciprocate his love — Tim Jr didn’t believe his father loved him.

Hubbard asks the father if he ever told his son that his mother Cynthia didn’t love home or tell him that she didn’t want him. Jones Sr responds, “that would be cruel.”

When Tim Jr got older, Tim Sr testifies that getting along with his son was “like walking on eggshells.”

“The babies,” Tim Sr said when speaking about Tim Jr’s five children, “they meant so much.”

Hubbard asks Jones Sr what he thought when he found out the kids and his son were missing — Jones Sr thought Jr had lost it.

Jones Sr had last seen the kids in December 2012 when Jones Jr visited Mississippi and picked at other family members.

Jones Sr says that his son got jealous when Sr remarried; that he was angry in 2012 when he packed up kids and went home to SC.

He testified that there was no interaction between father and som until August 2014 when Jones Sr calls to apologize and makes plan to see kids in Atlanta.

Jones Sr testifies that his son thought that he (Jones Sr) chose everybody over him (Jr).

He blames himself more than his son for the deaths of his grandchildren.

Jones Jr sits staring ahead during his father’s testimony.

THE DOCTOR AND THE GUARDS

Last Friday, the State rested its case in the sentencing phase with emotional testimony from teachers from Saxe Gotha, the school that the three oldest Jones children attended.

Breen, with Assemblies of God Church and Central City Church in Columbia, testified that Jones’ faith appeared to be based on externals not internals, which can cause problems.

The reverend also said that Pentecostals believe in redemption in Heaven and Tim believes he will be reunited with his children. Been believes Tim could be a good influence on people.

Sowards testified that Jones has been a compliant prisoner, does what Sowards asks, has been quiet and courteous.

Dr Maddox had testified before in the trial how she was asked by the defense to do an evaluation of Jones when he entered Kirkland Correctional Center on Sept. 13, 2014.

Maddox testified that at that time, Jones was clearly psychotic — and diagnosed him as schizophrenic with unnamed underlying mental psychosis.

Credit: tglantz@thestate.com
Dr. Donna Maddox a forensic psychiatrist, testifies during the sentencing phase of the trial of Tim Jones in Lexington. Timothy Jones, Jr. was found guilty of killing his 5 young children in 2014. Maddox believes Jones is 'clearly psychotic'. 6/10/19

Since that time, she has been used as a consultant by the defense team, and has seen Jones once a year since 2014 to order tests and check on Jones’ medication.

Maddox says Jones meets criteria for schizophrenia and continues to have symptoms of psychosis. The doctor gives a very brief description of her visits with Jones:

Maddox thought/still thinks Jones under-reports symptoms; he knows his symptoms but unable to identify them when they occur.

Solicitor Hubbard on cross-examination, asked Maddox about Dr Brawley, she runs the neuro-psychological tests for Maddox. Maddox trusts her methodology and did tests on Jones in 2016 to see how his brain is functioning.

At the time, Jones was medicated 320mg of Geodone and told Brawley he couldn’t think straight. Jones later tested with Dr. Cruz with much higher results in Feb 2019.

Maddox relied on Brawley in March 2019 to complete her final report — updated in May 2019 — and discounted Cruz’ assessment of Jones as non-schizophrenic, a possible malingerer.

Hubbard points out that others have looked at case — Dr Frierson (Maddox respects him, he didn’t diagnose schizophrenia, but synthetically induced psychosis) and Dr Wood (she diagnosed schizo-affective disorder)— none came up with schizophrenia.

RELATED: 'My babies should be alive:' Mom of 5 SC children who were killed testifies

Maddox agrees that symptoms found/reported by Frierson are similar and Jones’ history is similar. Cruz’ tests leaning to malingering are discounted because, Maddox says, the tests were taken 5 years later.

Maddox maintains her diagnosis. She testifies that on her third visit with Jones, he still blamed Nahtahn for his actins of August 28, 2014 — a delusion in Maddox’s opinion.

Hubbard asks the doctor if she had heard a taped phone call from Kirkland in which Jones says he blamed Amber — but Nahtahn was the catalyst — for killing the children.

The solicitor says that Jones self-reported hallucinations but was never observed by doctors or correction officials of showing outward symptoms of hearing or reacting to hallucinations or voices.

Since the start of the murder trial, the doctor testifies that she has seen Jones twice:

Hubbard: Jones not an accurate historian. He’s lied on many occasions and self-reported symptoms.

Maddox: we look for signs of malingering and take lying into account. Jones has no delusions because he’s medicated and not taking synthetic/recreational drugs

The death penalty is not automatic in this case — jurors could consider extenuating circumstances and sentence Jones to life without parole, rather than death. All twelve deciding jurors must be in agreement and sign the verdict form.

The penalty phase is much like a second trial, with both the prosecution and defense presenting opening arguments, evidence and character witnesses. The State will go first, followed by the defense team. The State could then have the last word with a reply if they so desire.

It has been projected that the penalty phase could last through Wednesday, going to the jury Wednesday evening or Thursday.