An emergency management agency in the Bahamas hasn't tweeted in 10 hours. 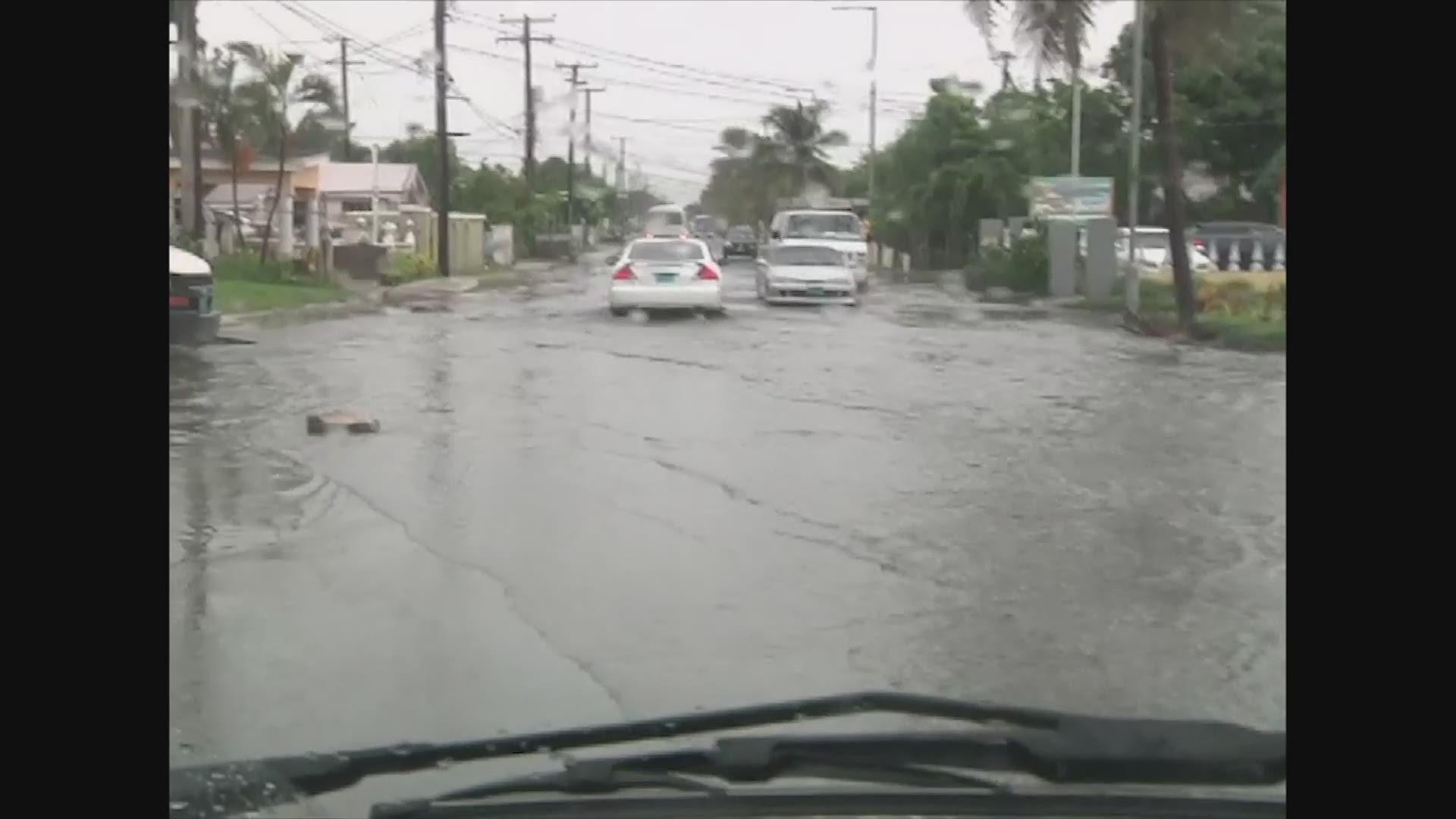 FREEPORT, Bahamas (AP) — Hurricane Dorian hovered over the Bahamas on Monday, pummeling the islands with a fearsome Category 4 assault that shredded roofs, hurled cars and forced even rescue crews to take shelter until the onslaught passes.

The storm's top sustained winds fell slightly to 155 mph, and its westward movement slowed almost to a standstill. The system crawled along Grand Bahama Island at just 1 mph and was expected to generate a storm surge of 18 to 23 feet.

"We need you to bunker down," Kwasi Thompson, minister of state for Grand Bahama, warned people. "It's going to be another 10-12 hours that we're going to be bombarded with this."

Thompson and other officials said they received distress calls about rising floodwaters, but rescuers could not go out in the violent conditions.

"They are ready to get into those areas as soon as the weather subsides," he said.

Meanwhile, in the United States, the National Hurricane Center extended watches and warnings across the Florida and Georgia coasts. Forecasters expected Dorian to stay just offshore, but meteorologist Daniel Brown cautioned that "only a small deviation" could draw the storm's dangerous core toward land.

By late Monday morning, the water had already reached roofs and the tops of palm trees in Grand Bahama. One woman filmed floodwaters lapping at the stairs of her home's second floor.

CBS affiliate WKMG reports that authorities in the Bahamas are urging people to find flotation devices and grab household tools like hammers to break out of their attics if they get trapped by Hurricane Dorian.

In Freeport, Dave Mackey recorded video showing water and floating debris surging around his house as the wind shrieked outside.

"Our house is 15 feet up, and right now where that water is is about 8 feet. So we're pretty concerned right now because we're not at high tide," said Mackey, who shared the video with The Associated Press. "Our garage door has already come off. ... Once we come out of it with our lives, we're happy."

On Sunday, Dorian churned over Abaco Island with battering winds and surf and unleashed heavy flooding as people called radio stations and sent desperate messages on social media to find loved ones.

"We received catastrophic damage here in Abaco," Parliament member Darren Henfield told reporters. He said officials did not have information yet on what happened in nearby cays. "We are in search-and-recovery mode. ... Continue to pray for us."

Information began emerging from other affected islands, with Bahamas Power and Light spokesman Quincy Parker telling radio station ZNS that there was a total blackout in New Providence, the archipelago's most populous island. He also said the company's office in Abaco island was flattened by the storm.

"The reports out of Abaco as everyone knows," Parker said as he paused for a deep sigh, "were not good."

Most people went to shelters as the storm neared. Tourist hotels shut down, and residents boarded up their homes. But many people were expected to be left homeless.

On Sunday, Dorian's maximum sustained winds reached 185 mph, with gusts up to 220 mph, tying the record for the most powerful Atlantic hurricane to ever make landfall. That equaled the Labor Day hurricane of 1935, before storms were named. The only recorded storm that was more powerful was Hurricane Allen in 1980, with 190 mph winds, though it did not make landfall at that strength.

Forecasters said Dorian was likely to begin pulling away from the Bahamas early Tuesday and curving to the northeast parallel to the U.S. Southeast seaboard.

An advisory from the hurricane center warned that Florida's east-central coast could see a brief tornado sometime Monday afternoon or evening.

South Carolina Gov. Henry McMaster issued an order Sunday for the mandatory evacuation of his state's entire coast. The order, which covers about 830,000 people, was to take effect at noon Monday, at which point state troopers were to make all lanes on major coastal highways one-way heading inland.

"We can't make everybody happy, but we believe we can keep everyone alive," McMaster said.

Authorities in Florida ordered mandatory evacuations in some vulnerable coastal areas. North Carolina Gov. Roy Cooper warned his state that it could see heavy rain, winds and floods later in the week.

Dorian first came ashore Sunday at Elbow Cay in Abaco Island, then made a second landfall near Marsh Harbour. A storm surge was reported at 18 to 23 feet.

The Bahamas archipelago is no stranger to hurricanes. Homes are required to have metal reinforcements for roof beams to withstand winds into the upper limits of a Category 4 hurricane, and compliance is generally tight for those who can afford it. Risks are higher in poorer neighborhoods, with wooden homes in low-lying areas.

After leaving the Bahamas, Dorian is forecast to drift north, spinning 40 to 50 miles off Florida, with hurricane-force wind speeds extending about 35 miles to the west.

The hurricane center issued a hurricane watch for Florida's East Coast from Deerfield Beach north to Altamaha Sound in Georgia. A storm surge watch was extended northward along the Georgia coast to the Savannah River. Lake Okeechobee was under a tropical storm watch.

Weekend traffic was light in Florida despite the many evacuation orders, unlike during the chaotic run-up to Hurricane Irma in 2017, when the unusually broad storm menaced the entire state.