'I will not sit back and watch in silence': Liz Cheney says Trump, GOP backers threaten democracy

Rep. Liz Cheney called out leaders of her own party on the eve of a vote that could oust her from House Republican leadership. 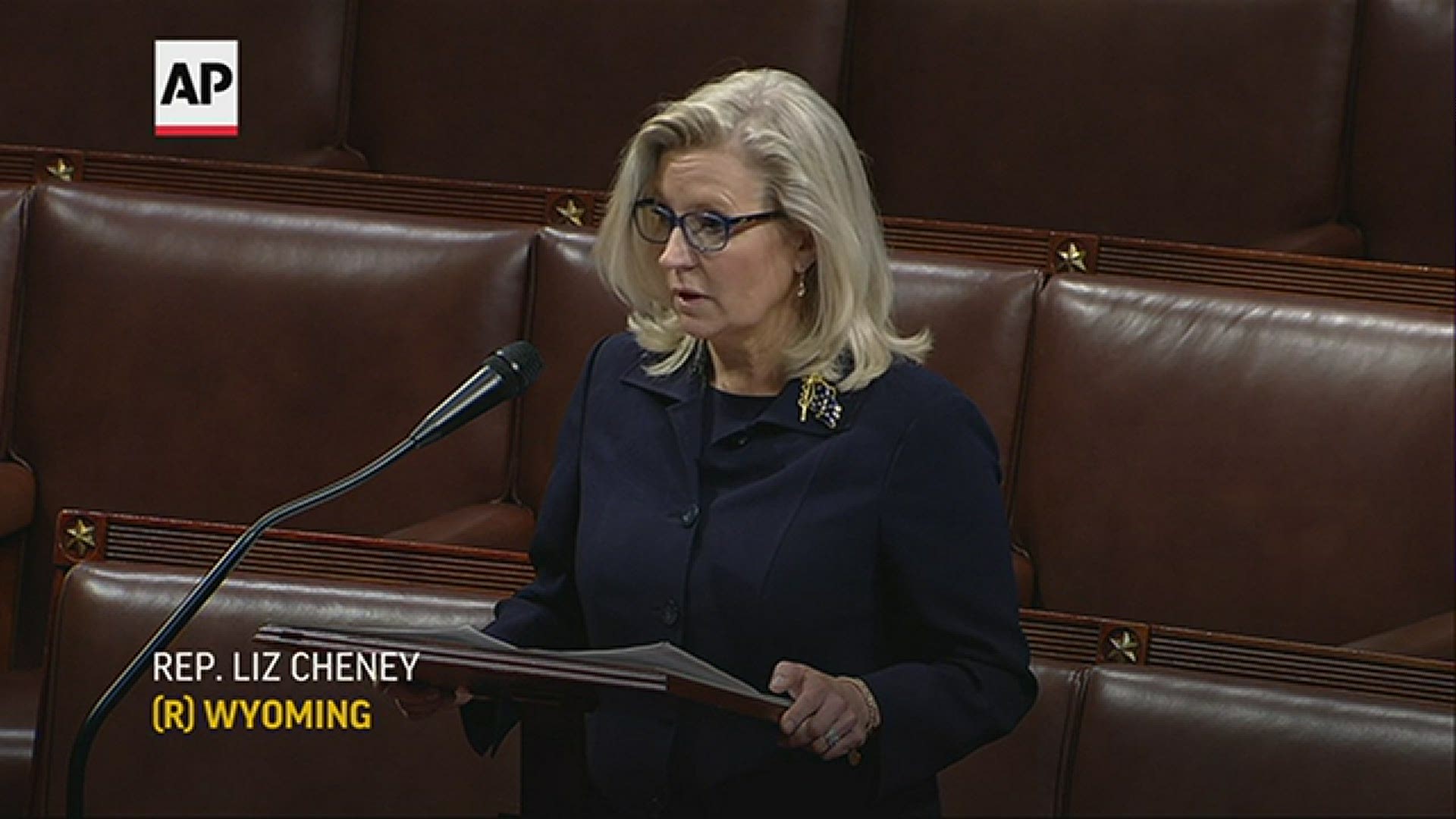 WASHINGTON — A combative Rep. Liz Cheney lashed out at leaders of her own Republican Party late Tuesday, taking to the House floor on the eve of her near-certain ouster from a leadership post to warn that former President Donald Trump and his GOP supporters are threatening to “undermine our democracy.”

In an abruptly announced evening appearance in a nearly empty House chamber, Cheney, R-Wyo., cast herself as a defender of the Constitution. Her four-minute speech also served notice that she had no intention of backing down in her battle against a former president who has retained loyalty among many GOP lawmakers and voters, even as it leaves her once promising political career in question.

“Remaining silent and ignoring the lie emboldens the liar,” she said, adding, “I will not sit back and watch in silence while others lead our party down a path that abandons the rule of law and joins the former president’s crusade to undermine our democracy.”

Cheney has for weeks faced calls for her ouster from her leadership job after her repeated public rejection of Trump's false claim that he lost his reelection bid last November because of widespread cheating. She's also insistently blamed him for inciting supporters who stormed the Capitol on Jan. 6, resulting in five deaths, even as other Republicans have sought to downplay the attack.

That stance has angered many Republicans who say that as her party's No. 3 House leader, she should focus on messages that would help the party win House control in next year’s elections, not on internal party divisions over the former president. GOP lawmakers plan to meet Wednesday behind closed doors and are expected to strip her of her leadership job and ultimately replace her with Rep. Elise Stefanik, R-N.Y., a Trump loyalist.

The widespread GOP opposition to Cheney's stubborn stance has created a jaw-dropping moment in which one of the country's two major parties is insisting on acceptance of, or silence about, the former president's falsehoods as the price of remaining in Republican leadership.

“Millions of Americans have been misled by the former president," Cheney said. "They have heard only his words, but not the truth as he continues to undermine our democratic process, sowing seeds of doubt about whether democracy really works at all.”

The latest spike in hostilities was prompted last week when Trump released a statement saying, “The Fraudulent Presidential Election of 2020 will be, from this day forth, known as THE BIG LIE!”

On Tuesday, Cheney said: “Today, we face a threat America has never seen before. A former president who provoked a violent attack on this Capitol, in an effort to steal the election, has resumed his aggressive effort to convince Americans that the election was stolen from him. He risks inciting further violence.”

Trump foes have been using “the big lie” to describe his repetition of his fallacious claim that the election was fraud-ridden. State and local agencies and courts around the country have found no evidence that Trump lost due to cheating.

Cheney did not mention her GOP adversaries by name. House Minority Leader Kevin McCarthy, R-Calif., and No. 2 House Republican Steve Scalise, R-La., have called for her removal and are supporting Stefanik to replace her.

Cheney is a daughter of former Vice President Dick Cheney. Her career had defined her firmly as an old-school conservative GOP figure, advocating for tax cuts and an assertive U.S. presence abroad.

She criticized Trump at times during his presidency. But their relationship plummeted after she became one of just 10 House Republicans to vote for impeaching him for inciting his backers to invade the Capitol as Congress formally certified now-President Joe Biden's electoral college victory.

President Joe Biden won the 2020 presidential election by an Electoral College count of 306-232. There was no widespread election fraud. Those claims were rejected by Democratic and Republican election officials in Georgia and other states, by U.S. cybersecurity officials and federal judges appointed by Trump and by the U.S. Supreme Court, which included three justices selected by the former president. Also, then-Attorney General William Barr said there was no evidence of fraud that could change the election outcome.

Travis Pittman contributed to this report.