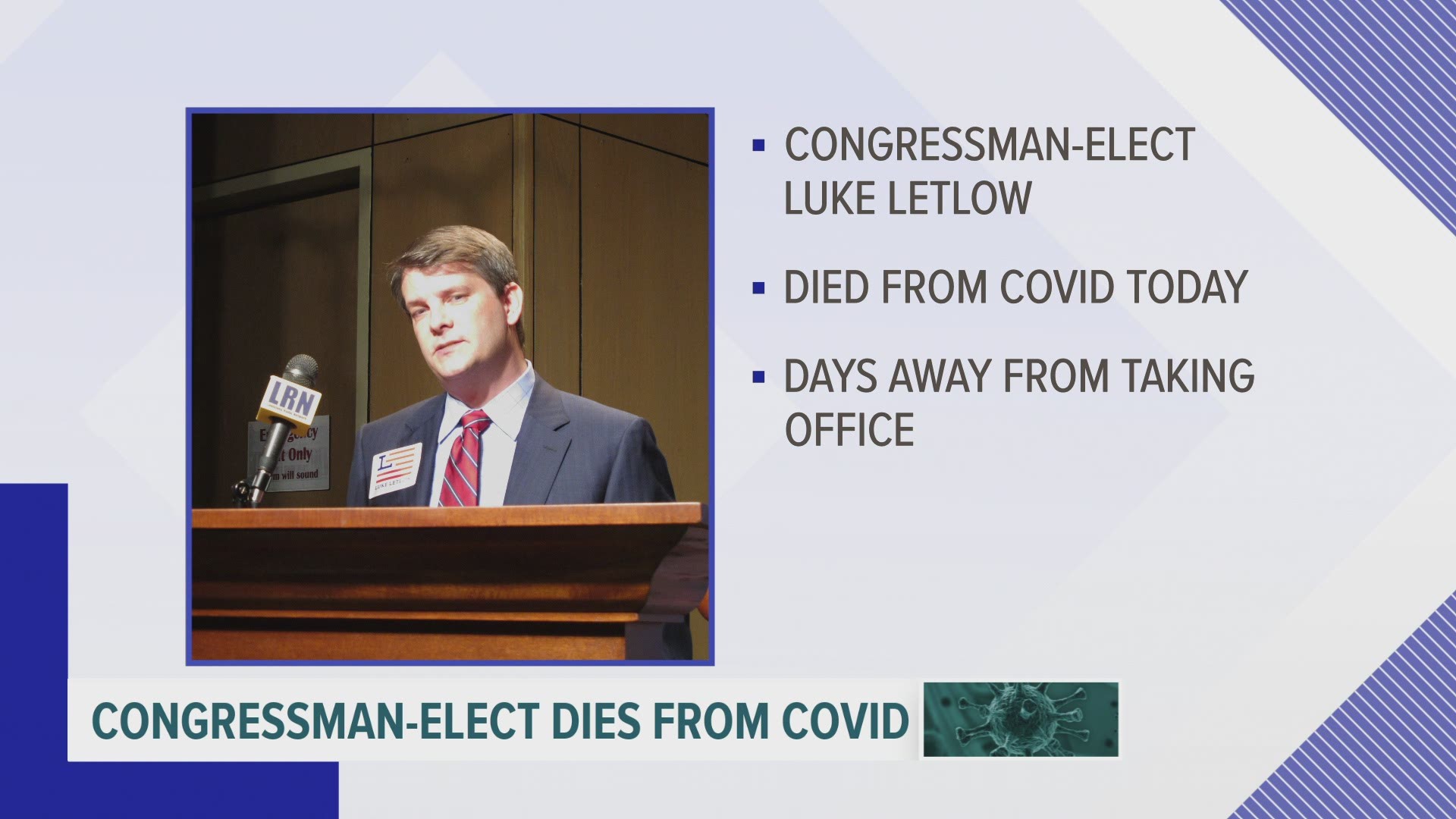 BATON ROUGE, La. — The death of a newly elected U.S. representative from Louisiana of complications related to COVID-19 stunned the state's political circles Wednesday and became the latest brutal reminder of how dangerous the coronavirus can be.

Luke Letlow, who was only 41 and had no known underlying health conditions, died Tuesday night at Ochsner-LSU Health Shreveport — days before he was scheduled to be sworn into office, according to his spokesman Andrew Bautsch. Bautsch asked for privacy for Letlow's family “during this difficult and unexpected time.”

Republican U.S. Sen. Bill Cassidy, a doctor who tested positive for the coronavirus earlier this year and has since recovered, seemed almost at a loss for words in a Twitter video he posted Tuesday night about Letlow's death, stopping at one point before saying: “It just, just, just, just brings home COVID can kill. For most folks it doesn’t, but it truly can. So, as you remember Luke, his widow, his children in your prayers, remember as well to be careful with COVID.”

Only weeks after Letlow was elected, state officials Wednesday began discussing logistics for a special election to fill the seat again.

House Speaker Nancy Pelosi opened her weekly news conference Wednesday on Capitol Hill by extending “great sympathy” to the congressman-elect’s family and pushing for greater efforts to end the pandemic. The Democratic leader said Letlow's COVID-related death could “happen to anyone — and it has happened to nearly 350,000 Americans.”

“Many of those deaths could have been avoided," she said. Pelosi added: “We must make sure that we are scientific and determined to crush the virus."

Louisiana state House Speaker Clay Schexnayder, a Republican, issued a statement mourning Letlow's death and saying: “This pandemic is real and it’s taken too many of our loved ones. Too many husbands and wives, brothers and sisters, fathers and mothers, daughters and sons."

Gov. John Bel Edwards intends to call a March special election to fill the congressional seat, according to his spokeswoman, Christina Stephens.

Letlow was admitted to a Monroe hospital on Dec. 19 after testing positive for the coronavirus. He was later transferred to the Shreveport facility and placed in intensive care.

Dr. G.E. Ghali, of LSU Health Shreveport, told The Advocate that Letlow didn't have any underlying health conditions that would have placed him at greater risk of developing complications from COVID-19.

The congressman-elect had been inconsistent in his precautions against the coronavirus, though he acknowledged the severity of COVID-19 and said in a debate that he personally knew people who had died from the disease.

Photos posted on social media from campaign events show Letlow sometimes wearing a mask when interacting with potential voters, but other times — including at his victory party, two weeks before his hospitalization — without a face covering as he posed for pictures with supporters.

Hailing from the small town of Start in Richland Parish, Letlow was elected in a December runoff election for the sprawling 5th District U.S. House seat representing central and northeastern regions of the state, including the cities of Monroe and Alexandria. He would have been sworn in next week.

Letlow was going to fill the seat being vacated by his boss, Republican Ralph Abraham. He had been Abraham's chief of staff and ran with Abraham's backing for the job.

“There are no words for this loss,” Abraham posted on Facebook. "There was no one like Luke Letlow, and there was no one who loved this state and its people more. Luke was a part of our family, and we are so incredibly proud of the man he was.”

Before working for Abraham, Letlow had worked for former Gov. Bobby Jindal's administration.

Letlow is one of more than 7,000 people in Louisiana who have died from COVID-19 since March, according to data from the state health department.

Letlow is survived by his wife, Julia Barnhill Letlow, and two children.

RELATED: Newsmakers we lost in 2020

RELATED: Sports figures we lost in 2020

RELATED: Entertainers we lost in 2020