The royal baby star of the show has arrived, cradled in the arms of his mum, Duchess Kate of Cambridge.

The christening of the third royal Cambridge heir, baby Prince Louis, was underway Monday in the Chapel Royal at St. James's Palace in London as adoring members of his Windsor and Middleton families looked on, but not his nonagenarian great-grandparents.

It was the world's first glimpse of the baby prince — the sixth great-grandchild of Queen Elizabeth II and Prince Philip — in public since he was born on April 23.

The date was special to the queen: July 9, 1947, was the day her engagement to Prince Philip, 97, was announced. But the two were not at the ceremony.

The queen, 92, had spent a busy week in Scotland and was traveling to London to face another busy week including major ceremonies on Tuesday and a meeting with President Donald Trump on Friday.

Prince Philip has retired from public duties and is not often seen in public anymore.

The new fifth in line to the throne was baptized an Anglican with the full name of Louis Arthur Charles of Cambridge in a private ceremony in the same small chapel where his brother, Prince George of Cambridge, was christened in October 2013.

As usual, the christening was an intimate affair. Present were the baby's parents, Prince William and Duchess Kate, and his grandfather, Prince Charles, the Prince of Wales, and his wife Duchess Camilla of Cornwall.

Uncle Prince Harry and his bride, Duchess Meghan of Sussex, were there, plus his maternal grandparents, Carole and Michael Middleton, aunt Pippa Middleton Matthews and her husband James Matthews, and uncle James Middleton.

Members of the Royal Family arrive at St James's Palace for the christening of Prince Louis. pic.twitter.com/3pDk4D898C

Pippa Middleton, who is expecting her first baby in the fall, was among the first of the guests to arrive at the chapel. She was followed by her parents and brother, and by some of the godparents and their spouses.

Cutest expected participants: Brother Prince George, third in line to the throne, who turns 5 on July 22, and sister Charlotte, 3, the fourth in line. It was the first look at the Cambridge family of five in public since the baby's birth.

Charlotte was dressed in one of her signature smock dresses in blue and white, while George wore dark shorts and a white shirt.

Duchess Kate was in a creamy Alexander McQueen dress with a V-neck, plus a Jane Taylor hat.

Prince Louis was dressed in the royal christening gown, a replica of the 1841 original retired 10 years ago.

Also on the guest list were the six godparents, announced by Kensington Palace on Monday morning. They included old school friends and a Middleton cousin.

Nicholas van Cutsem, one of William and Harry's oldest friends; Guy Pelly, another chum who married an American in Memphis in 2014 in a wedding attended by William and Harry; Harry Aubrey-Fletcher, another old friend of William's; Lady Laura Meade, the daughter of an earl who married one of William's closest friends from Eton, James Meade, who is a godparent to Princess Charlotte; Hannah Carter, an old school friend of Kate's and sister-in-law to one of Princess Charlotte's godparents; and Lucy Middleton, Kate's cousin, whose brother Adam Middleton is a godparent to Princess Charlotte.

After the 40-minute ceremony, the families went to Clarence House for a tea party where guests were to be served slices of the traditional christening treat, a tier taken from Will and Kate's 2011 wedding cake.

The service, conducted by Archbishop of Canterbury Justin Welby, featured all of the usual trappings of a royal christening, including the silver baptismal Lily Font, the water taken from the River Jordan, the singing by the Royal Chapel choir, and the baby clad in a handmade replica of the royal christening gown of Honiton lace lined with white satin.

"I’m delighted and privileged to be christening Prince Louis today – a precious child made in God’s image, just as we all are. Please join me in praying for him and his family on this special day," Welby said in a statement posted on Twitter.

This is the third time around for Will and Kate but only the second time they've picked the Chapel Royal for the ceremony. Their second child, Princess Charlotte, was christened at St. Mary Magdalene Church on the queen's Sandringham estate in Norfolk.

Used by royals since Queen Victoria's time, that little church was a sentimental choice because it's where Prince William's late mother, Princess Diana, was herself christened in 1961 when her Spencer family was living on the Sandringham estate.

Royal babies close to the throne are usually christened in London, although not always at St. James's Palace, the oldest (commissioned by Henry VIII in the 1530s) royal palace in Britain. Before George, the St. James's Chapel Royal was last used for the christening of William's cousin Princess Beatrice, in 1988. Prince William, Prince Charles and the queen, for example, were all christened in the Music Room of Buckingham Palace.

The cozy (seats less than 50) chapel's long history (it was built starting in 1540) is steeped in royal connections and ceremonies. Its coffered ceiling is decorated with royal initials and coats of arms believed to have been painted by 16th-century German master Hans Holbein.

The chapel is where Queen Victoria married Prince Albert in 1840. More recently, it was where the former Meghan Markle was baptized an Anglican in a ceremony conducted by Archbishop Welby shortly before her May 19 wedding to Prince Harry.

The christening gown also has a long history. The original was made in 1841 for the christening of Queen Victoria's eldest daughter, Princess Victoria, the Princess Royal, and was subsequently worn for all royal christenings, including Queen Elizabeth, her children and most of her grandchildren.

But it was in such fragile shape that the queen commissioned her dressmaker, Angela Kelly, to make a replica. The queen's youngest grandchild, James, Viscount Severn, son of Prince Edward, was the first member of the family to wear the replica at his christening in the private chapel at Windsor Castle in April 2008.

Both Prince George and Princess Charlotte also wore the replica gown at their christenings. 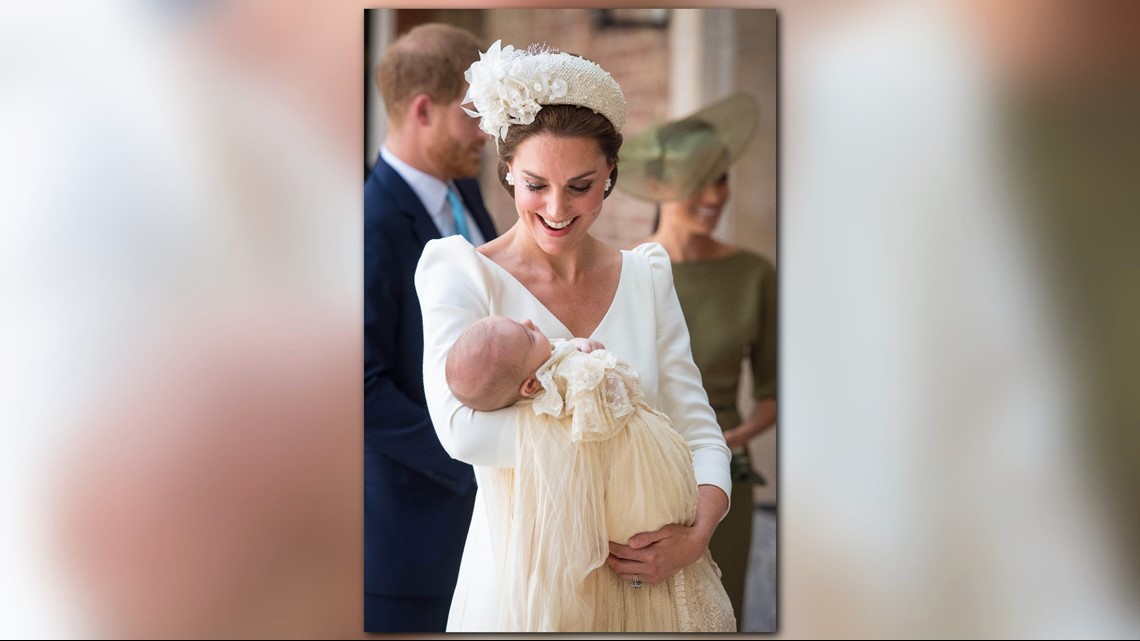