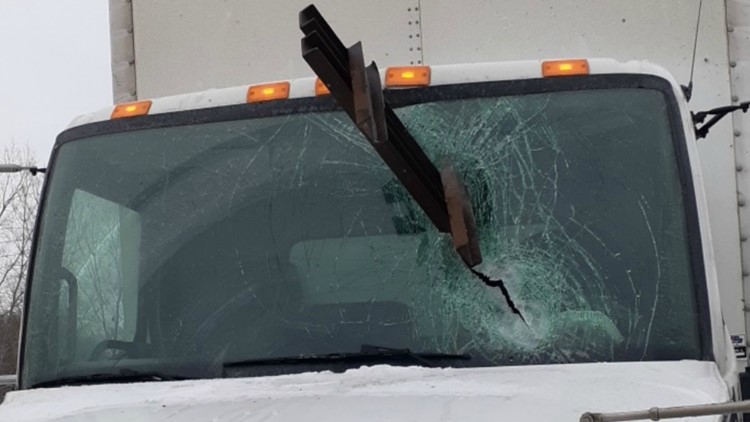 WILLIAMSTON, Mich — It started as a routine trip for Johnnie Lowe. He was driving a 26-foot box truck on Thursday to pick up auto parts from General Motors in Lansing, Michigan.

Then, he nearly lost his life behind the wheel – but it was the steering wheel that saved him.

His boss at DNC Logistics told 10News Lowe was heading west on Interstate 96 behind a flatbed truck that was carrying large steel beams.

General manager Jerry Babcock said when the truck changed lanes, one of the beams flew off the back, bounced off the asphalt and flew like a solid steel missile straight through Lowe’s windshield.

Incredibly, the beam was slowed by the dashboard and stopped by the steering wheel – no more than six inches from Lowe’s chest.

Babcock said Lowe’s experience overcame his adrenaline at a moment when many drivers couldn’t have maintained their composure.

“It was definitely a miracle that he managed to pull the truck to the side of the road and come to a complete stop without further injuries to himself or any pedestrians,” Babcock said.

Lowe told his boss he’s not sure the driver was even aware he’d lost his load. Babcock is more disappointed in the other drivers. He said no one pulled over to make sure Lowe was OK.

Thankfully, he walked away with just a tiny cut on his cheek from the shards of flying glass.

RELATED: Girl impaled in head by steel bar after falling out of tree

RELATED: Gun impaled in car bumper may be tied to Lakewood shooting