The Tampa Bay Lightning won its second straight Stanley Cup title to give the region its third professional sports title in less than a year. 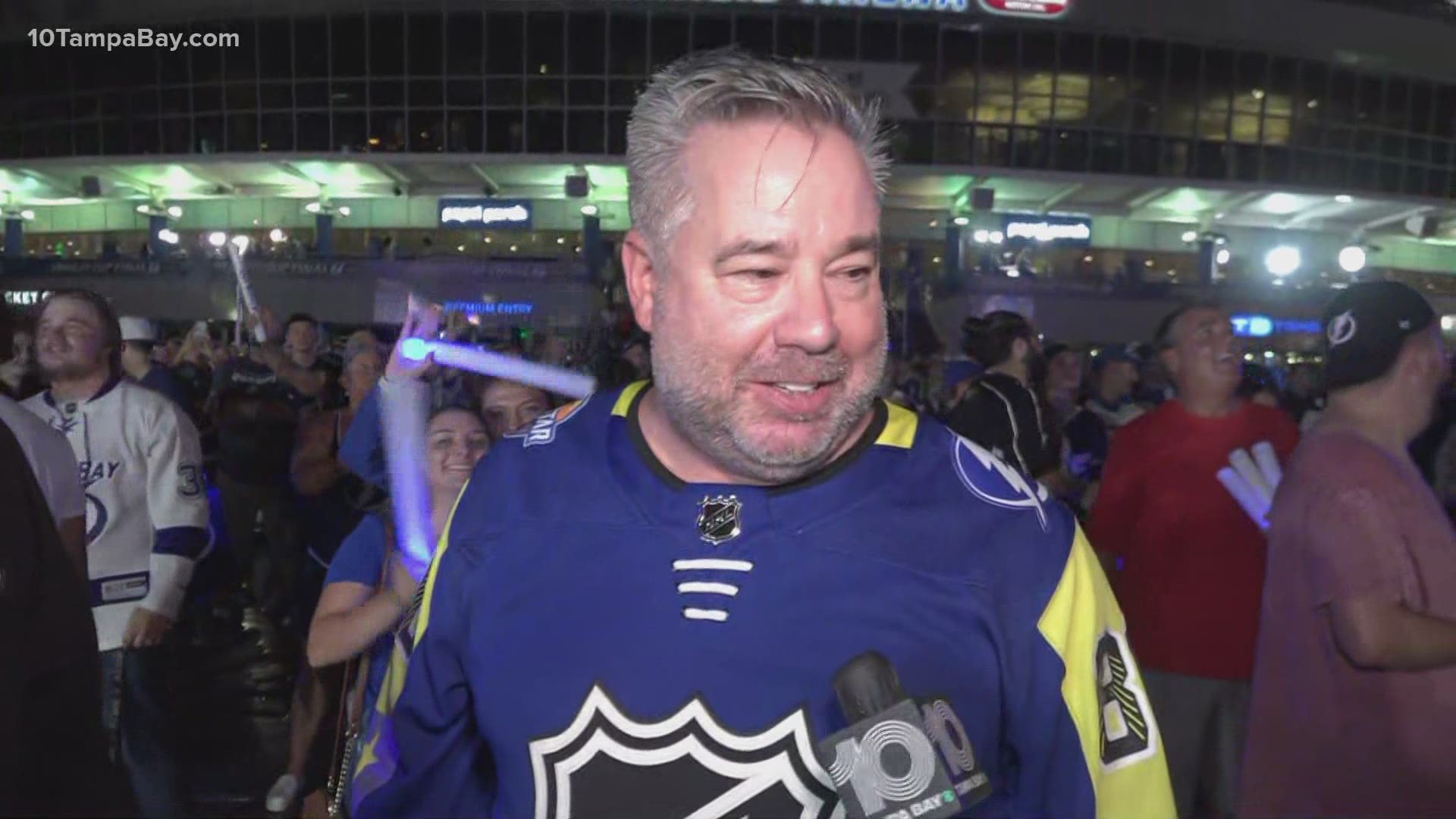 TAMPA, Fla. — The party began more than two hours before faceoff and got merrier as the night wore on.

The Tampa Bay Lightning won their second straight Stanley Cup title on Wednesday night, defeating the Montreal Canadiens 1-0 to give a region becoming known as Champa Bay its third professional sports title in less than a year.

A raucous crowd of 18,110 packed Amalie Arena, while thousands more gathered on a plaza outside the building to celebrate after being forced to follow the team’s entire 2020 NHL playoff run from afar due to the coronavirus pandemic.

Fans stood for the final two minutes of goaltender Andrei Vasilevskiy's fifth consecutive shutout in a series-clinching win, cheering, snapping pictures and recording video on cellphones. They remained on their feet, dancing to music blaring from speakers and soaking up the atmosphere of the post-game trophy ceremony.

Vasilevskiy won the Conn Smythe Trophy as the playoff MVP and each player — and coach Jon Cooper — took turns skating around the rink with the Stanley Cup.

“No one left. ... It was pretty cool,” forward Alex Killorn said.

“It’s out of this world," defenseman Victor Hedman said. "Winning a Stanley Cup is one thing. But doing it in front of our fans, family means the world.”

The NFL’s Buccaneers became the first team to win a Super Bowl played in its home stadium in February, with a largely pro-Tampa Bay crowd of 24,385 cheering Tom Brady to a record seventh NFL title.

The latest celebration comes just five months after the Bucs beat the Kansas City Chiefs for their first championship in 18 years.

The region actually had a shot at a fourth title in the past year. Major League Baseball’s Tampa Bay Rays won the American League pennant, but lost the World Series to the Los Angeles Dodgers in six games while making most of its playoff run in MLB bubbles set up in San Diego and Arlington, Texas.

The Lightning, who spent the entire 2020 postseason in Canada because of the pandemic, became the first team to clinch a Stanley Cup title on home ice since the Chicago Blackhawks in 2015. Mayor Jane Castor got her wish, too, since she had drawn attention for asking the team to lose Game 4 so they could have a shot at winning at Amalie Arena instead.

While coach Jon Cooper and his players said earlier this week that they didn’t have a preference for where they hoisted the Cup for a third time as a franchise, it clearly felt good to do it before loyal fans responding to calls to “Be The Thunder” in the stands.

“You never forget your first. ... It's like we were doing it for the first time again,” Cooper said, noting the difference of celebrating in the bubble without fans, family and friends — even owner Jeffrey Vinik — as opposed to Wednesday night. “We couldn't have written the script any better.”

While the Canadian government limited capacity for Montreal home games during the Final to just 3,500, the Lightning gradually increased the number of fans allowed to buy tickets as the playoffs progressed.

Fans are also looking forward to a more traditional celebratory parade in downtown Tampa. The Lightning and Bucs were honored with boat parades after last season’s titles, while fans lining the waterfront were urged to wear masks and practice social distancing.

“To do it in front of our fans, our family, our friends, that’s what means the most to us. We didn’t get a chance to do it last year," captain Steven Stamkos said.

“We wanted to win it in Game 4,. It didn’t work out,” Stamkos added, referring to the Lightning's 3-2 overtime loss in Montreal. "Maybe it’s a blessing in disguise we got to do it at home. Our family has been there supporting us since Day 1. We can’t wait to celebrate with them.”