Texas border crossing where migrants made camp to reopen 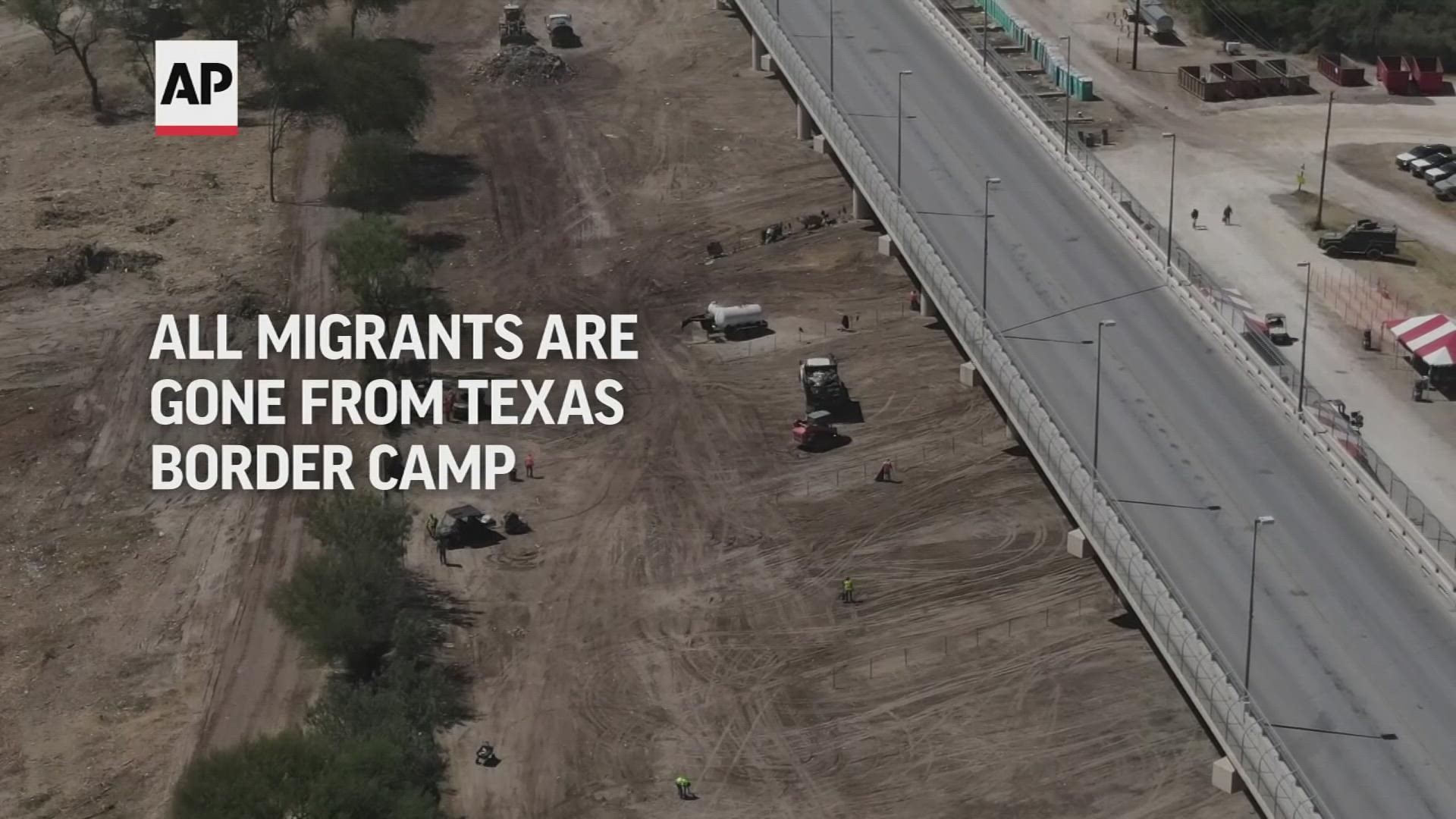 The agency issued a statement saying trade and travel operations will resume at Del Rio Port of Entry for passenger traffic at 4 p.m. Saturday. It will be reopened for cargo traffic on Monday morning.

CBP temporarily closed the border crossing on Sept. 17 and rerouted traffic to the one in Eagle Pass, Texas, about 50 miles to the southeast, after as many as 15,000 mostly Haitian migrants suddenly crossed into Del Rio from Mexico and made camp around the U.S. side of the border bridge. The camp was completely cleared on Friday.

Many of the migrants were seeking asylum in the U.S.

The number of migrants peaked last Saturday as migrants driven by confusion over the Biden administration's policies and misinformation on social media  converged at the border crossing connecting Del Rio, Texas, and Ciudad Acuña, Mexico.

The U.S. and Mexico worked swiftly, appearing eager to end the humanitarian situation that prompted the resignation of the U.S. special envoy to Haiti and widespread outrage after images emerged of border agents maneuvering their horses  to forcibly block and move migrants.

On Friday, President Joe Biden said the way the agents used their horses was "horrible" and that "people will pay" as a result. The agents have been assigned to administrative duties while the administration investigates.

Later, Department of Homeland Security Secretary Alejandro Mayorkas spoke cautiously about the pending investigation. Asked about the discrepancy, White House press secretary Jen Psaki said Biden "was not prejudging an outcome" or interfering with the investigation, but "was speaking from the heart."

Many migrants face expulsion because they are not covered by protections recently extended by the Biden administration to the more than 100,000 Haitian migrants already in the U.S., citing security concerns and social unrest in the Western Hemisphere's poorest country. A devastating 2010 earthquake forced many from their homeland.

Mayorkas said about 2,000 Haitians had been rapidly expelled on 17 flights since Sunday and more could be expelled in coming days under pandemic powers that deny people the chance to seek asylum.

The Trump administration enacted the policy, called Title 42, in March 2020 to justify restrictive immigration policies in an effort to prevent the spread of the coronavirus. The Biden administration has used it to justify the deportation of Haitian migrants.

A federal judge late last week ruled that the rule was improper and gave the government two weeks to halt it, but the Biden administration appealed.

Officials said the U.S. State Department is in talks with Brazil and Chile to allow some Haitians who previously resided there to return, but it's complicated because some of them no longer have legal status there.

The Mexico office of the U.N.'s International Organization for Migration released a statement late Friday saying it is looking for countries where some Haitians have residency or where their children have citizenship as an alternative to allowing them to be deported to Haiti.

"Should migrants be willing to return and should concerned states be in agreement, IOM is ready to offer its expertise through its Assisted Voluntary Return (AVR) Program to help these migrants return in a safe and informed manner," the statement said.

Mayorkas said the U.S. has allowed about 12,400 migrants to enter the country, at least temporarily, while they make claims before an immigration judge to stay in the country under the asylum laws or for some other legal reason. They could ultimately be denied and would be subject to removal.

Mayorkas said about 5,000 are in DHS custody and being processed to determine whether they will be expelled or allowed to press their claim for legal residency. Some returned to Mexico.

A U.S. official with direct knowledge of the situation said six flights were scheduled to Haiti on Friday, with seven planned Saturday and six Sunday, though that was subject to change. The official was not authorized to speak publicly.

In Mexico, around 50 migrants, most of them single men, remained Friday evening in the riverside camp in Ciudad Acuña. Dozens of families had crossed back to Del Rio overnight after Mexican authorities left the area. Others moved to small hotels or private homes in Ciudad Acuña.

Luxon, a 31-year-old Haitian migrant who withheld his last name out of fear, said he was leaving with his wife and son for Mexicali, about 900 miles (1,450 kilometers) west along Mexico's border with California.

"The option was to go to a place where there aren't a lot of people and there request documents to be legal in Mexico," he said.

At the Val Verde Border Humanitarian Coalition in Del Rio, migrants stepped off a white Border Patrol van on Friday, many smiling and looking relieved to have been released into the U.S. Some carried sleeping babies. A toddler walked behind her mother wrapped in a silver heat blanket.

A man who'd driven almost 1500 miles (2,414 kilometers) from Toledo, Ohio, hoping to pick up a friend and her family wore a neon yellow vest and quietly scanned the line of Haitian migrants. Dave, who didn't want to share his last name, didn't see them.

"I feel like my friend is worth my time to come down and help," he said, explaining that he wore the vest so his friend — a nurse whom he'd met on a humanitarian trip to Haiti over a decade ago — would be able to spot him in the crowd when she arrived with her husband and 3-year-old daughter.

"I just see it as an opportunity to serve somebody," said Dave, who considers himself a Trump supporter but hates how politicized the immigration issue has become. "We have so much."