Proud Boys' leader turns himself in for BLM flag burning

Henry "Enrique" Tarrio was sentenced to more than five months in jail for the incident. 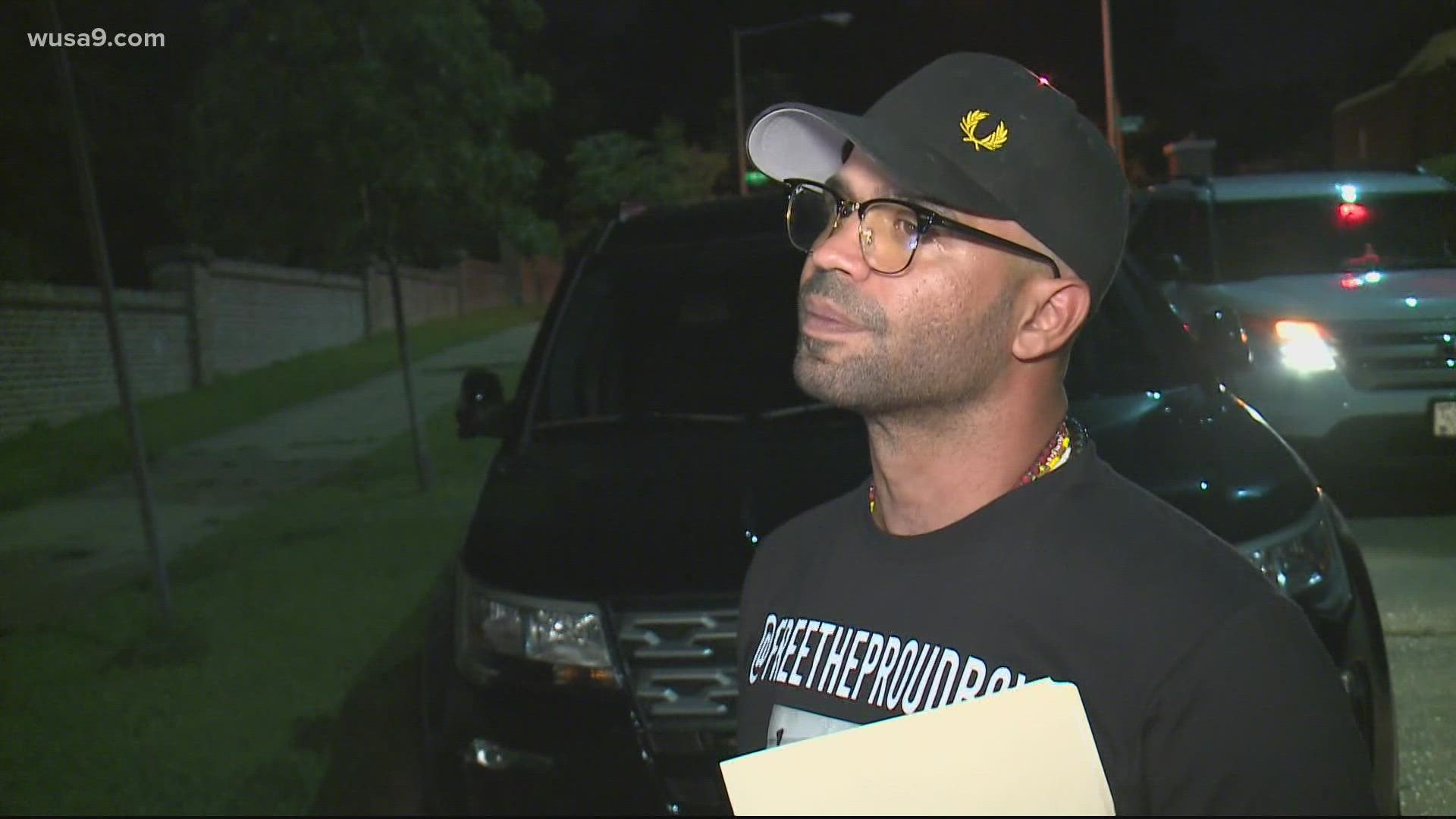 WASHINGTON — Henry "Enrique" Tarrio, the leader of the Proud Boys, turned himself in to police Monday evening.

Tarrio, chairman of the Proud Boys, an all-male organization known for pushing a far-right-wing agenda, and known for violence and neo-nazi ties, arrived at the D.C. Central Detention Facility about 9 p.m. Monday, with just hours left until the deadline a D.C. Judge gave him to self-surrender and begin serving his jail term.

A D.C. Superior Court judge sentenced Tarrio to more than five months behind bars last month for burning a Black Lives Matter banner and bringing two high-capacity magazines into the District of Columbia back in December.

As Tarrio turned himself in to D.C. Corrections, another man walked by his side and they sang as they made their way towards the gate. The two hugged and the unnamed man told Tarrio "It's going to be here for ya in five months."

🚨BREAKING🚨 #ProudBoy Enrique Tarrio reports to DC Corrections to serve 5 month prison sentence after pleading guilty to stealing, burning BLM banner from DC Church, bringing high capacity magazine into the District. Hear what he had to say before he went in 👇🏻👇🏻👇🏻#CapitolRiots pic.twitter.com/Mx3rdEODRD

Judge Harold Cushenberry said Tarrio's apparent lack of remorse and repeated criminal violations following previous terms of probation warranted a higher sentence than the 90 days the Justice Department requested in the case. He sentenced Tarrio to 155 days in jail and three years of probation.

“Mr. Tarrio’s conduct in these criminal cases indicate none of these democratic values [he claims]," Cushenberry said. "Instead Mr. Tarrio’s actions betrayed them. Mr. Tarrio has clearly, intentionally and proudly crossed the line from peaceful protest into dangerous and potentially violent criminal conduct.”

At Tarrio’s sentencing, Cushberry gave the Miami man two weeks to self-surrender to authorities at the detention center, a clock that ran out at midnight September 6. He will have up to a year to pay hundreds of dollars of fines and restitution to Asbury United Methodist Church.

Tarrio, spent his final hours of freedom posting to his Telegram profile, including a long “goodbye letter” in which he thanked his supporters.

Tarrio was arrested on January 4 when he traveled to D.C. to attend former President Donald Trump's “Stop the Steal” rally while in possession of two large capacity magazines. The magazines, which are illegal to possess in D.C., were discovered while police were executing an arrest warrant on Tarrio for charges stemming from the burning of a Black Lives Matter flag stolen from Asbury United Methodist Church in December 2020.

Hours before he self surrenders at the DC Jail so serve a 5 month prison sentence for crimes leading up to #CapitolRiots #ProudBoys Chairman Enrique Tarrio posts long message to his supporters on Telegram, asking for donations. pic.twitter.com/yC4BMmc7di

RELATED: Capitol Police officers told to prepare for fence to return ahead of ‘Justice for J6’ protest

It is unclear if Tarrio will be housed with other January 6 defendants held without bond at the DC Central Detention Center before trial including members of the Proud Boys who see him as their leader or if he will be kept in the jail’s general population, which includes violent offenders not associated with the Capitol Riots.