MacDill takes a break from daily operations to talk suicide

According to the Air Force, 78 airmen have committed suicide so far in 2019, which is 28 more than the number at this time last year 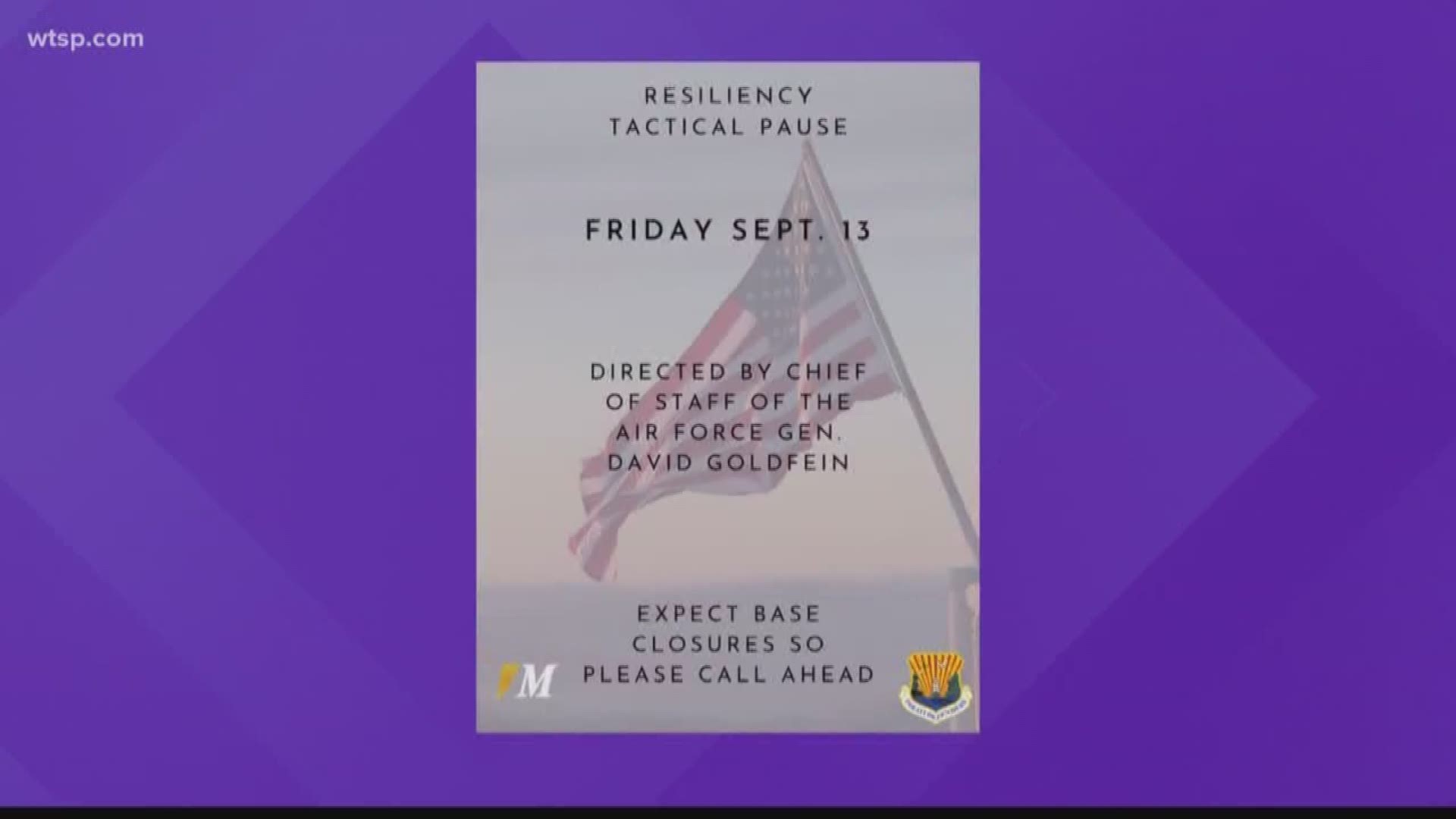 According to the Air Force, 78 airmen have committed suicide so far in 2019. That's  28 more than there were this time last year.

So, the Air Force mandated a Resiliency Tactical Pause on Friday to focus on suicide prevention and mental health-related issues.

"We lose more airmen to suicide than any other single enemy, even more than combat,” Chief Master Sergeant Kaleth Wright said in a video produced by the Air Force promoting the pause in operations.

RELATED: 'Mom, you're too much': Veteran women become the new face of PTSD

RELATED: 'Stop the Stigma': An unfiltered look at mental illness

MacDill Air Force Base in Tampa, which participated in the tactical pause on Friday, produced its own video featuring a conversation between two high-ranking officers on the base.

“It was one person at work that realized that I wasn’t quite the person I usually was,” said Chief Master Sergeant Anthony Green of the 6th Air Mobility Wing. “And that individual is the one that pulled me aside and really started having those conversations and, by me talking, I was able to categorize those thoughts that really tormented me at night.”

“It’s not just the effort of this one, single day,” added Col. Stephen Snelson. “This is a culture change that we have to make sure that we have these conversations and we emphasize the importance of that connectedness.”

“These are the people who take care of America and these are the people who have to be strong and have to be ever-ready,” said Dr. Glenn Catalano, Associate Chief of Staff for Mental Health & Behavioral Sciences at the VA in Tampa. “I think sometimes in the past there’s been the thought that talking about feelings and talking about emotional wounds makes them not as ready to act and be available to their colleagues and their country.”

Meanwhile, the VA works to combat suicide among veterans. Data shows that more than half of the veterans who commit suicide every day are not engaged in VA care, which is why the VA is focused so intently on serving veterans where they are and making mental health services more accessible to veterans who need them.

If you have suicidal thoughts, you are not alone. And, there is help available. Contact the Crisis Center of Tampa Bay at 211 or the National Suicide Prevention Lifeline at (800) 273-8255.

Resources: Considering suicide or know someone who is? There is help