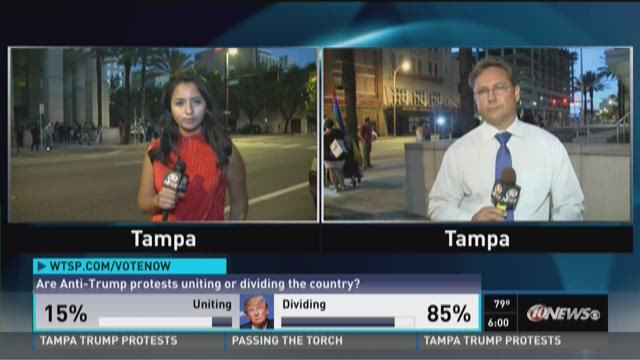 “The BLM email inbox was blowing up and I said 'OK, I'm not going to sleep, I will organize through the night,'” she said.

Davis says the messages were filled with fear, sadness and frustration from minorities across Tampa Bay.

“They wanted to come together, they wanted to talk to people that were like-minded and know they're not alone,” says Davis.

That is the reason she spent Thursday making posters and banners for people frightened over what's to come from a Trump presidency.

“If we go forward the opportunities are endless, but If we go back, were going to hit a wall and not the wall that Trump is talking about - and it's going to hurt us all,” says Davis.

Among the protesters, we spoke with refugee Laila Abdelaziz, who says she won't tolerate Trump's comments about immigrants, women and minorities. That's why she will walk in solidarity with those hurting throughout the U.S.

“We’re watching and whatever happens during a Trump presidency we'll be here to fight back and protect the disenfranchised, to protect women and their reproductive rights and protect minority communities that have a lot of fear for these next four years,” says Abdelaziz.