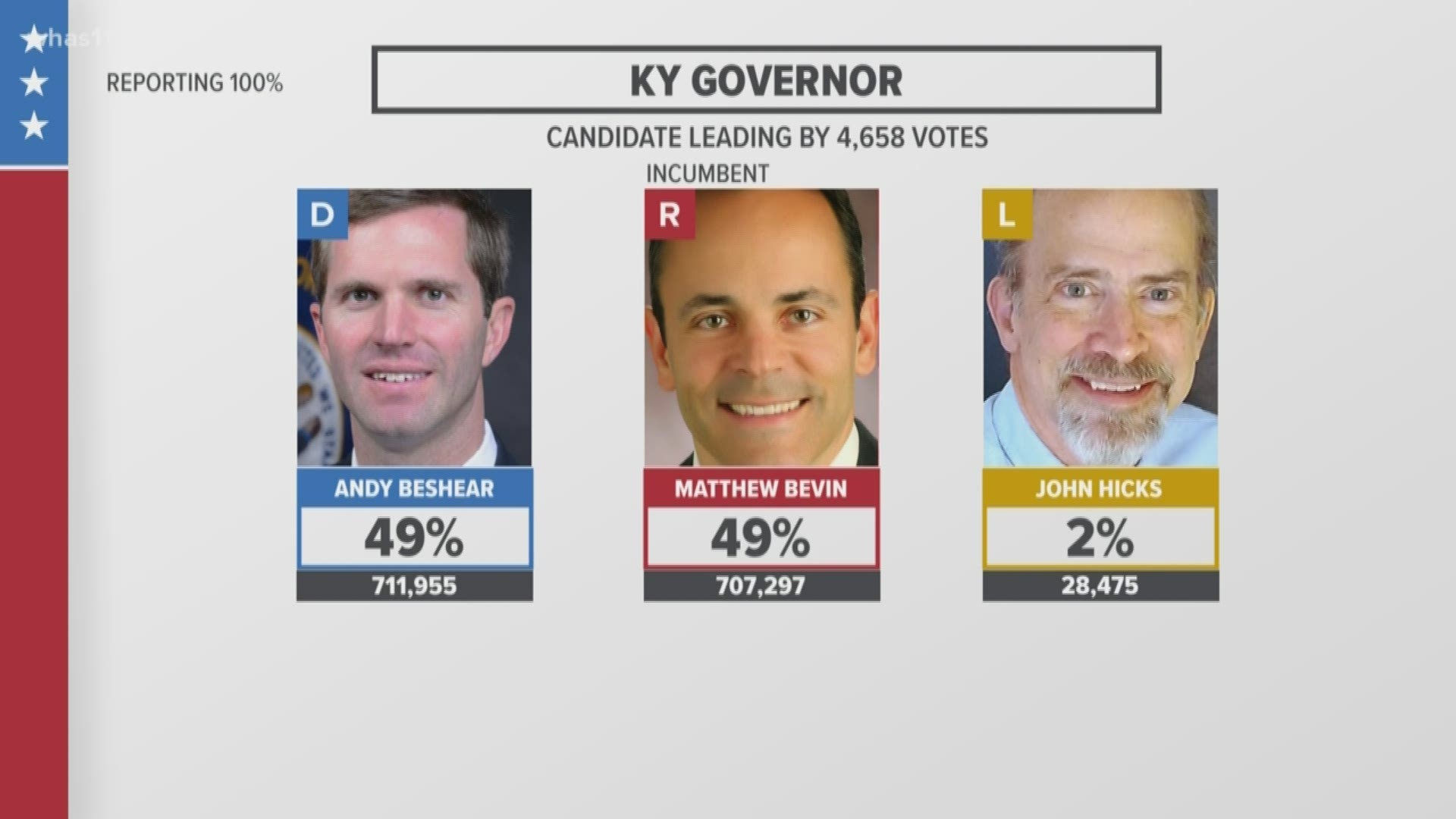 With 100% of precincts reporting, Beshear, son of the state's last Democratic governor, Steve Beshear, had a lead of 5,333 votes out of more than 1.4 million counted, or a margin of nearly 0.4 percentage points.

The bitter rivals gave competing speeches in which Beshear claimed victory while Bevin refused to concede.

"My expectation is that he (Bevin) will honor the election that was held tonight," Beshear said. "That he will help us make this transition. And I'll tell you what, we will be ready for that first day in office, and I look forward to it."

Bevin called it a "close, close race" and said he wasn't conceding "by any stretch."

"We want the process to be followed, and there is a process," he said.

Bevin hinted that there might be "irregularities" to look into but didn't offer specifics.

There is no mandatory recount law in Kentucky. Bevin may request counties recanvass their results, which is not a recount, but rather a check of the vote count to ensure the results were added correctly. Bevin would need to seek and win a court's approval for a recount.

The final hours of campaigning were overshadowed by the endorsement Bevin received from President Donald Trump. Through a spokesman, the president gave himself credit for helping the incumbent governor.

"The president just about dragged Gov. Matt Bevin across the finish line, helping him run stronger than expected in what turned into a very close race at the end," Trump campaign manager Brad Parscale said in a statement. "A final outcome remains to be seen."

Trump had loomed large in the race as Bevin stressed his alliance with the president in TV ads, tweets and speeches. Trump carried Kentucky by a landslide in winning the presidency in 2016 and remains popular in the state. The president took center stage in the campaign with his Monday night rally in Lexington to energize his supporters to head to the polls for his fellow Republican.

Bevin had been struggling to overcome a series of self-inflicted wounds, highlighted by a running feud with teachers who opposed his efforts to revamp the state's woefully underfunded public pension systems.

The political grudge match between Bevin and Beshear stretched into Tuesday night.

Beshear dominated in the state's urban areas in Louisville and Lexington and won some traditionally Republican suburban counties in the state's northernmost tip, just south of Cincinnati, to offset Bevin's strength in rural areas. Beshear also made inroads in the eastern Kentucky coalfields, winning several counties in a region where Trump is highly popular.

Beshear maintained his focus throughout the race on "kitchen table" issues like health care and education to blunt Bevin's efforts to hitch himself to Trump and nationalize the race. He exploited Bevin's feud with teachers over pensions and education issues, which resonated with voters.

School bus driver Conley McCracken said earlier Tuesday that he voted for Bevin the first time. But school issues turned him away from the Republican.

"He's trying to keep retirement away from a lot of the teachers and school employees and things of that nature," the 68-year-old McCracken said.

Trump's support of Bevin wasn't enough to get McCracken's vote a second time around.

"I don't like the way he's doing, so I changed my mind," McCracken said.

On the campaign trail, Beshear said he wants to legalize casino gambling, proposing to use that revenue to support public pensions. He also emphasized public education, proposing a $2,000 across-the-board pay raise for public school teachers and vowing to submit "an education-first budget" to lawmakers.

Calling health care a "basic human right," Beshear supports inserting the federal Affordable Care Act's consumer protections into state law. He also vowed to rescind Bevin's efforts to require some "able-bodied" Medicaid recipients to get a job, go to school or volunteer to keep their benefits. Beshear, whose father set federal health care reform into motion in Kentucky when he was governor, said at least 95,000 people would lose coverage if Bevin's work requirements became law. A federal judge blocked the work requirements, and Bevin's administration is appealing.

The race's result could reverberate far beyond Kentucky. The fierce contest was being watched closely for early signs of how the increasingly partisan impeachment furor in Washington might affect Trump and other Republican incumbents in 2020. Among those with an especially keen interest: Senate Majority Leader Mitch McConnell, who's on the ballot himself next year in Kentucky.

“President Trump’s rally helped five of six Kentucky Republicans win clear statewide victories, including Attorney General-elect Daniel Cameron, who will be the first black A.G. in Kentucky history and the first Republican to hold the office since 1948. The President just about dragged Gov. Matt Bevin across the finish line, helping him run stronger than expected in what turned into a very close race at the end. A final outcome remains to be seen.”

“Congratulations to Governor-elect Beshear, Kentucky Democrats, and DGA Chair Raimondo — this earth-shattering victory in a state Trump won by 30 points should terrify him and every Republican running in 2020. Governor-elect Beshear has dedicated his life to solving big problems and working on the issues that keep families up at night, and I’m proud to see him take that fight to the governor’s mansion.

“Americans across the country are voting for the values that Democrats fight for every day. That’s why we’re competing in every election and every state, and it’s why in 2020 we are going to defeat Trump and win Democratic victories at every level.”

The DNC made a six-figure investment in the Kentucky Democratic Party to support this race." 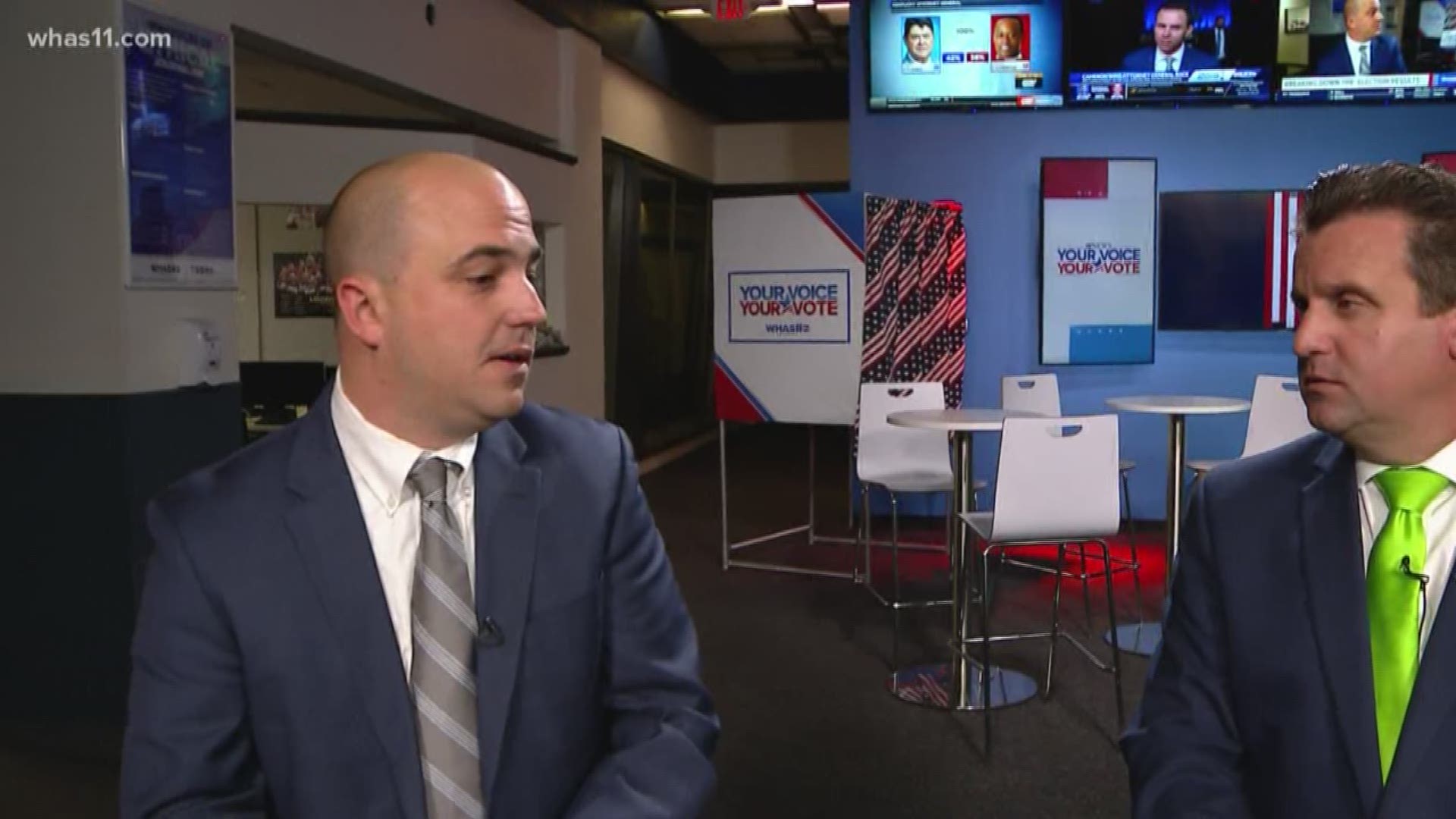