Multiple candidates made the case for environmental issues to be a top priority. 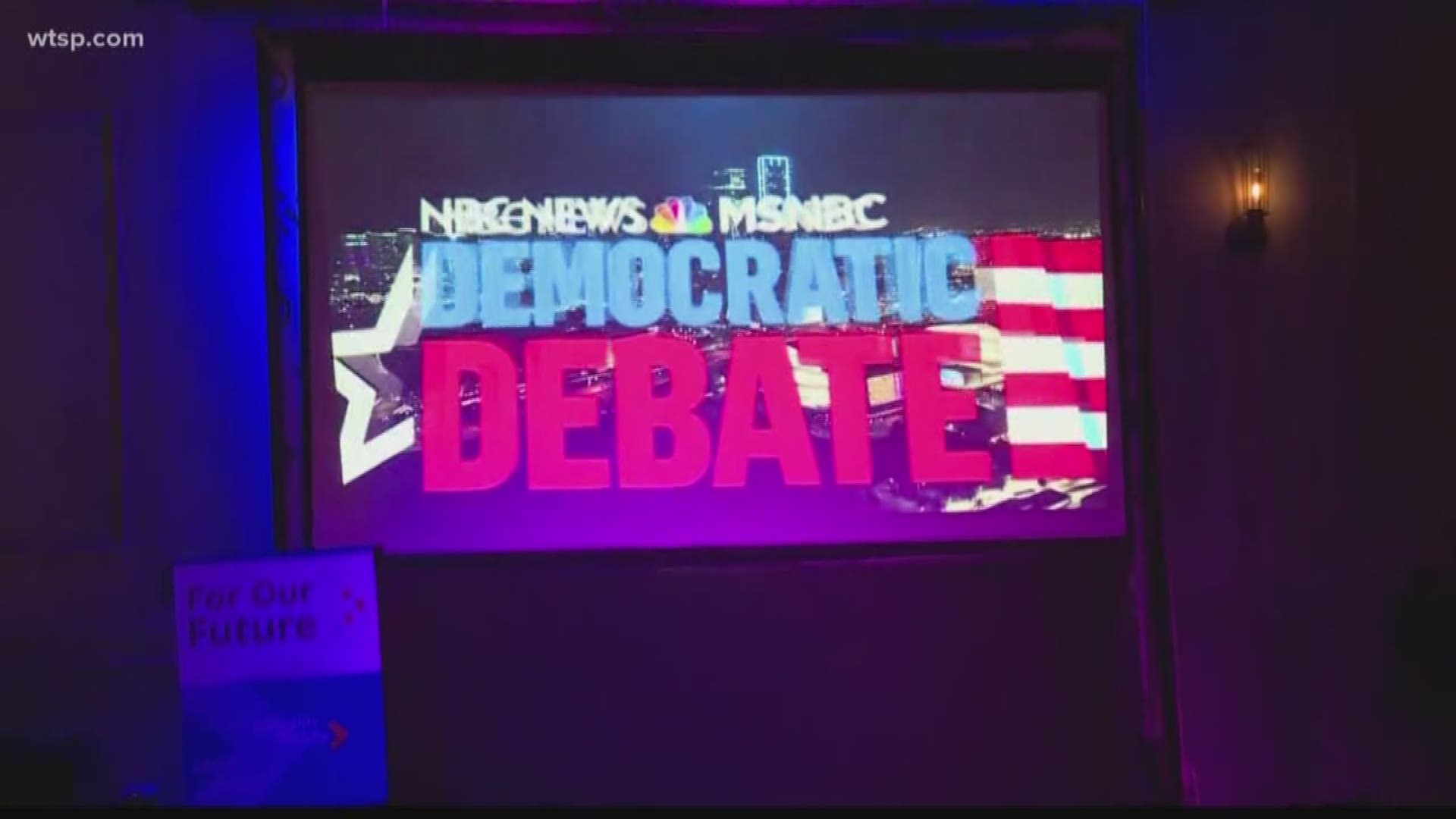 Elizabeth Warren's campaign trail refrain is that she has "a plan for it." That apparently extends to Senate Republican leader Mitch McConnell, who refused to hold a hearing for President Barack Obama's last Supreme Court nominee.

Warren was asked during Wednesday's Democratic presidential debate if she has a plan for dealing with the Kentucky Republican, who prides himself in blocking Democrats' legislative priorities.

She answered, "I do," drawing cheers from the audience.

The Massachusetts senator says energized Democrats have to "stay on the front lines," even after the 2020 presidential election is decided.

She says pressure must be applied both from activists on the outside and leaders on the inside "to make sure this Congress reflects the will of the people."

The Democratic presidential candidates are talking in very personal terms about gun violence and how to curb it.

Sen. Cory Booker of New Jersey said at Wednesday's debate that he lives in a neighborhood where shootings are common. He supports gun licensing and says, "This is not about policy. This is personal."

Sen. Elizabeth Warren of Massachusetts says the toughest questions she's gotten on the campaign trail are from kids who ask how she'd keep them safe. Warren says the U.S. should "double-down" on research into what works to reduce gun violence.

New York City Mayor Bill de Blasio talked about raising a black son and trying to keep him safe, including from police.

Wednesday's debate is taking place in Miami, about 50 miles from the high school in Parkland, Florida, where a gunman killed 17 people last year.

The second hour of the first Democratic presidential debate has been derailed by technical difficulties.

As debate moderators Rachel Maddow and Chuck Todd took over Wednesday for the next round of the debate, the 10 candidates on stage were unable to hear the question Todd was trying to ask about the federal government's role in getting guns off the street.

Following back-and-forth confusion, Todd announced the debate would head to a commercial break.

President Donald Trump tweeted that debate hosts NBC and MSNBC "should be ashamed of themselves for having such a horrible technical breakdown in the middle of the debate."

Trump is en route to Osaka, Japan, for the Group of 20 summit.

Related: What was the technical breakdown during the Democratic debate?

The first hour of the first Democratic presidential debate of the 2020 cycle passed with hardly a mention of the man whom the 10 candidates on stage hope to face next November.

Minnesota Sen. Amy Klobuchar was first to utter President Donald Trump's name, saying a few minutes into the debate, that Trump "sits in the White House and gloats" while the economy isn't working for everyone.

She also briefly referenced him again as the debate headed into its second hour. Responding to a question about U.S. tensions with Iran, Klobuchar said, "I don't think we should conduct foreign policy in our bathrobe at 5 in the morning."

Other candidates invoked the president's name in making their arguments on immigration.

Trump was en route to Japan for the G-20 summit as the two-night event got underway. He has weighed in once so far on the debate, tweeting, "BORING!"

Sen. Cory Booker is alone at the Democratic presidential debate in calling it a "mistake" to sign onto the 2015 nuclear accord with Iran.

The New Jersey senator was the only one of the 10 candidates on stage in Miami on Wednesday not to raise his hand when asked if he supported the deal. Under the agreement, Iran agreed to limit its enrichment of uranium and submit to U.N. inspections in exchange for the lifting of economic sanctions.

Pressed to explain his rationale, Booker said as president he would "do the best I can to secure this country."

President Donald Trump pulled the United States out of the accord in May 2018 and has imposed increasingly tough sanctions to pressure Iran into a better deal. The U.S. has threatened sanctions against countries that trade with Iran.

The Democratic presidential candidates are decrying the Trump administration's tough immigration policies, saying the president is to blame for the deaths of an immigrant father and his toddler daughter found lying face-down after drowning in the Rio Grande.

At Wednesday's debate, former Obama administration housing chief Julián Castro says a photo of the family "is heartbreaking" and "should piss us all off." He also attacked fellow Texan Beto O'Rourke for not supporting fully decriminalizing the act of crossing the U.S.-Mexico border illegally.

New Jersey Sen. Cory Booker spoke briefly in Spanish to further chastise Trump's policies, O'Rourke, a former congressman, took a question in Spanish and answered it, saying, "We are going to treat everyone with respect."

Questions over private health insurance have provoked the first clash of the Democratic presidential debate.

Former Texas Rep. Beto O'Rourke was explaining Wednesday why he supported a plan known as "Medicare for America" and not "Medicare for All," saying he wants people who are happy with their current health insurance plan to keep it.

When pressed if he wanted to fully replace private insurance, O'Rourke said: "No." That prompted New York Mayor Bill de Blasio to jump in from across the stage, saying, "Private insurance is not working."

O'Rourke started to respond that people unhappy could choose Medicare, but de Blasio shot back, "Why are you defending private insurance?"

The debate over how to handle private health insurance is emerging as a dividing line in the first 2020 Democratic debate.

Only Massachusetts Sen. Elizabeth Warren and New York City Mayor Bill de Blasio raised their hands when asked if they would abolish private health insurance entirely in favor of a government-run plan.

Warren went on to note that she supports a "Medicare for All" plan proposed by fellow hopeful Vermont Sen. Bernie Sanders.

The issue opened into a debate among many of the 10 candidates on stage on the first of two back-to-back debate nights. De Blasio later interrupted Rep. Beto O'Rourke's answer on how he'd handle health insurance by declaring that the current system is "not working."

President Donald Trump is skipping the opening minutes of the first Democratic debate to greet service members at Alaska's Elmendorf Air Force Base.

Trump told troops as the debate was starting Wednesday: "I had my choice between you and them. And I chose you."

Air Force One is refueling at the air base as Trump travels to Osaka, Japan, for meetings with world leaders at the Group of 20 summit. Asked how his opposition will fare, Trump says, "I think they're all going to do very poorly."

Former Texas Rep. Beto O'Rourke showed off his fluent Spanish while answering his first question of the Democratic presidential debate.

O'Rourke said Wednesday in English at the debate in Miami that "this economy has got to work for everyone" and that, right now, it isn't. Then he switched to Spanish, saying in that language that "we need to include everyone" in a booming national economy.

O'Rourke, who hails from the Texas-Mexico border city of El Paso, spoke in Spanish at length, then switched back to English. He said the Trump administration has focused on helping the wealthy and large corporations over everyday Americans — echoing similar sentiments of the other Democrats on stage.

Sen. Elizabeth Warren started off the first Democratic presidential debate answering a question about her policy driven campaign and how it may affect what is seen as a good economy.

Warren said Wednesday: "Who is this economy really working for?" She says, "It's doing great for a thinner and thinner slice at the top."

The Massachusetts senator says the economy is working well for "giant oil companies" and those who want to invest in private prisons, but not for those struggling and Americans facing the effects of climate change.

The second question of the night went to Sen. Amy Klobuchar on her criticism of the concept of free college.

The first debate of the 2020 Democratic presidential race is kicking off with a two-hour event featuring 10 candidates, including three senators, a mayor and several current or former members of Congress.

Sen. Elizabeth Warren of Massachusetts is center stage for Wednesday's debate in Miami because she leads the night's field in polling. She is flanked by former Rep. Beto O'Rourke of Texas and Sen. Cory Booker of New Jersey. At the far ends are New York City Mayor Bill de Blasio and former Rep. John Delaney of Maryland, who are polling at the bottom of the group.

The candidates will get right to it. NBC says they will be allowed to give closing statements but no openings.

Ten other candidates will meet Thursday for the second debate night.

The chairman of the Democratic National Committee is firing up the crowd at his party's first presidential primary debate — and previewing some lines of attack that candidates will use against President Donald Trump.

Tom Perez said Wednesday that the planet is under threat from unchecked climate change and that justice itself has been threatened under the current administration.

He says the Trump White House is nothing but a long trail of "broken promises" and corruption. There was long applause when Perez said immigrant children shouldn't be separated from their parents at the U.S.-Mexico border.

Ten Democrats hoping to deny Trump a second term will kick off two nights of back-to-back debates shortly. They entered the stage and waved to the audience before the debate began.

John Hickenlooper's struggle to get noticed in the crowded presidential primary field was on full display when a staffer at the first Democratic debate mistook him for a member of the press.

The former Colorado governor was entering the Miami debate hall Wednesday when a security guard asked if he was there to pick up his media credentials.

A reporter for National Public Radio who witnessed the exchange tweeted that Hickenlooper responded: "I'm a candidate."

But Hickenlooper may have gotten the last laugh with a jab at President Donald Trump, who was a reality TV star before he entered politics.

Hickenlooper quipped on Twitter: "Last time, we elected the most famous candidate. Let's try something new."

Hickenlooper will join nine other candidates Thursday night for the second of two debates.

White House hopefuls in Miami for the Democratic debates are trekking to nearby Homestead, Florida, to visit a large migrant detention facility.

The stops are intended to draw attention to President Donald Trump's immigration policies, which have seen migrant children separated from their families. Homestead is about 40 miles southwest of Miami and is a spot where the U.S. is detaining migrant teens.

Former Texas Rep. Beto O'Rourke is scheduled to visit the site on Thursday.

Ten presidential candidates, led by Sen. Elizabeth Warren, are set to meet on the debate stage for the first night of Democratic debates to offer their pitches to voters and attempt a breakout moment for their campaigns.

For many of the White House hopefuls, Wednesday's debate will be the highest-profile opportunity yet to offer their vision for the country.

Given the massive field, the debate will be split over two nights, with 10 other candidates — including former Vice President Joe Biden and Vermont Sen. Bernie Sanders — appearing Thursday.

Warren, the sole top-tier candidate at Wednesday's debate, will take center stage. But she could still face challenges. The other candidates aren't as well known and could use the moment to make an aggressive move to stand out.