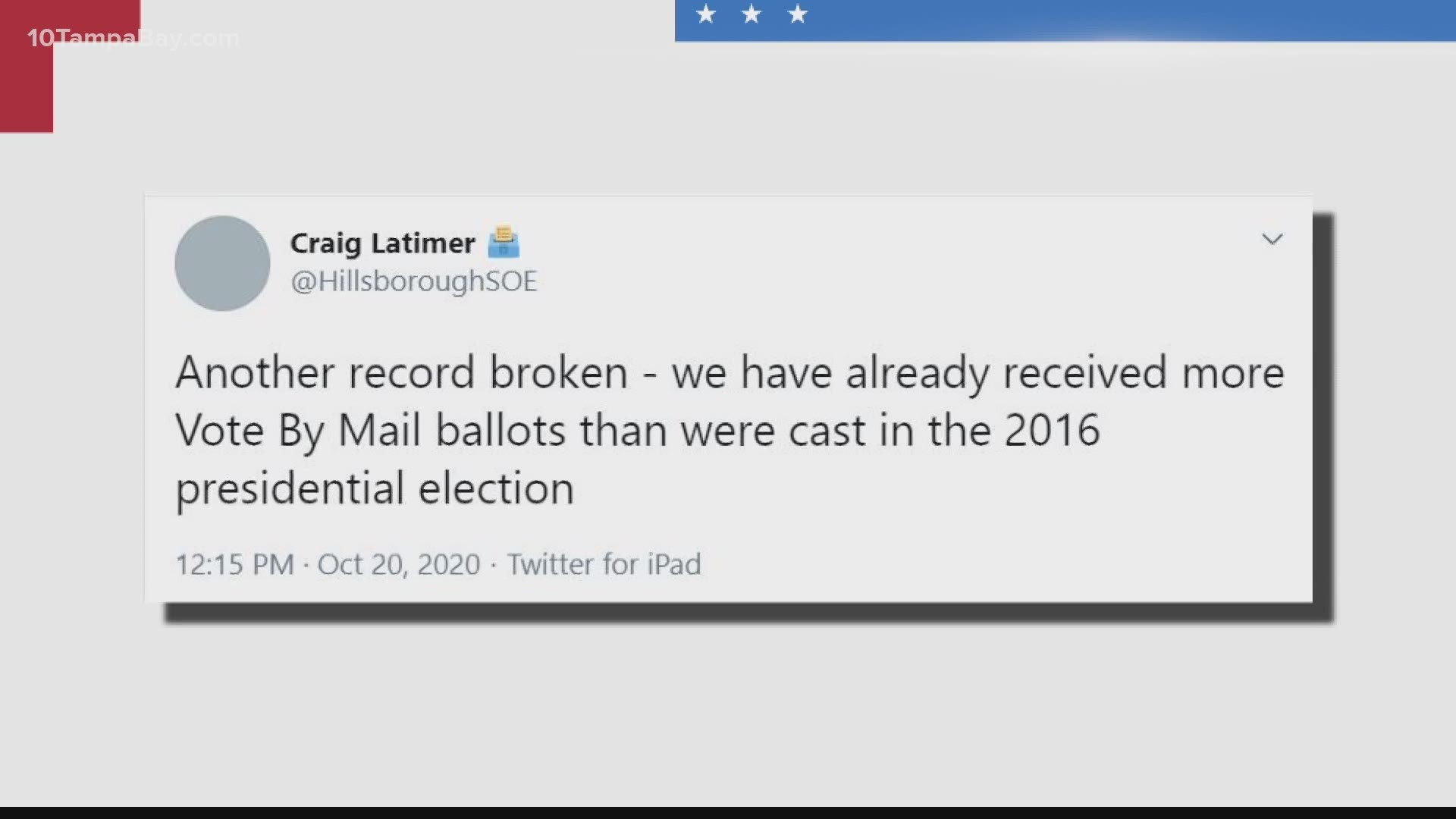 TAMPA, Fla. — With two weeks until election day, there is still plenty of time to vote and set historic records for a presidential election.

Analysts expect the electorate to continue to turn out and early voting to ramp up late next week as it reaches the final few days.

On Monday, hours into the first day of early voting, both Pinellas and Hillsborough counties' supervisors of elections announced a record-breaking first day. On Tuesday afternoon, Supervisor Craig Latimer tweeted: “Another record broken - we have already received more Vote By Mail ballots than were cast in the 2016 presidential election.”

RELATED: Hillsborough already received more vote-by-mail ballots than were cast in the 2016 election

When you hear that hundreds of thousands of ballots have already been cast in Tampa Bay, millions more in the state and even more nationally you have to ask – how much more is there?

The answer: a lot.

While a historic number of voters in Tampa Bay have requested vote-by-mail ballots and counties experienced a record-breaking first day of early voting, we want to put this into context.

Dr. Michael McDonald is a professor at the University of Florida who runs The Elections Project. He studies voter trends and data. He predicts a 65-percent voter turnout for the 2020 General Election.

10 Tampa Bay Vote Squad’s Courtney Robinson went through the numbers of registered voters for counties in Tampa Bay and then looked at what election offices reported for early voting and vote-by-mail ballots voted.

In Pinellas County, 216,318 ballots had been returned. That’s 30 percent of registered voters.

McDonald says early voting is still the big unknown in this election. He says voting trends have shifted in terms of how partisan voters are turning out. This year, more Democrats are voting by mail and make up much of the early voting numbers. He expects more Republicans will vote in-person early and on election day.

“We know how many mail ballots have been sent out to voters. We have a good sense of how many will be returning those ballots. What we don’t yet know yet is: How is the in-person early voting period going to play out? How is election day going to play out? Those are the big unknowns left in this election,” he said.

McDonald pointed to how close Florida election results are historically but said he does not expect it to reach the recount territory triggered by a margin of less than half a percent or less. Every vote will count as Florida is a must-win battleground state for candidates.