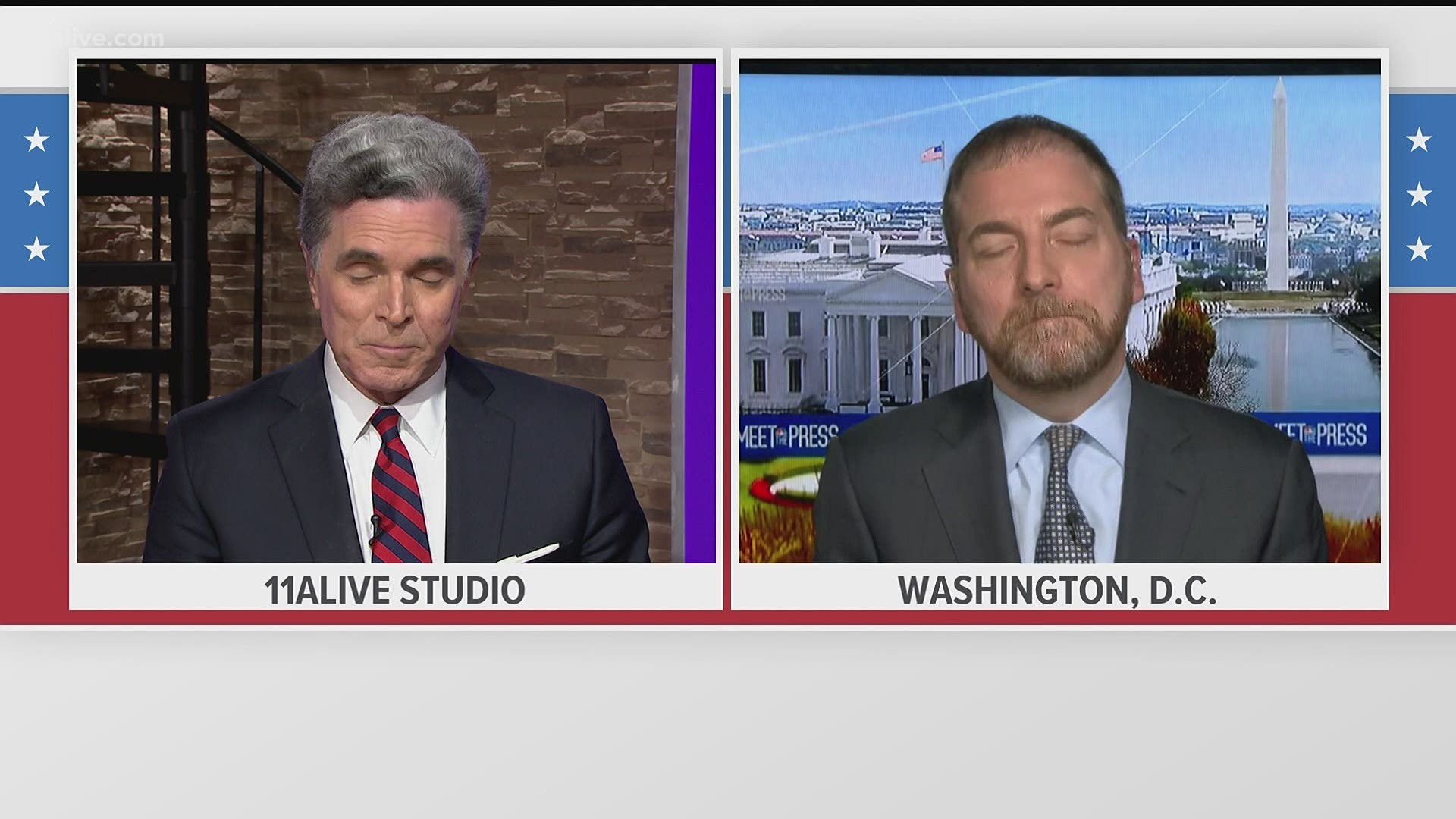 ATLANTA — President Donald Trump will travel to Georgia today, a day after filing suit to nullify the state's election outcome.

The president's visit comes at the end of a week that highlighted the extraordinarily contentious political atmosphere in the Peach State, where two Senate runoff races loom in January.

Georgia has seen, just this week: A frenzied rally by the pro-Trump attorneys Lin Wood and Sidney Powell telling Georgians not to vote for Sens. Kelly Loeffler and David Perdue unless they more vocally support their efforts; Rudy Giuliani and other supporters of the president laying out the contours of an election conspiracy claim central to his case in a daylong, fantastical Georgia Senate hearing; a visit by the vice president, Mike Pence, and now today a visit from the president himself, which promises more political high theater.

Through this, unbent state officials have continued with the task of trying to counter a runaway freight train of misinformation and reassert confidence in the state's electoral process a month away from the Senate runoffs.

The president will arrive in Georgia this evening for a 7 p.m. rally in Valdosta, where he will be rallying support for Loeffler and Perdue and, it's safe to presume, offering his thoughts on where things stand in the Peach State.

Throughout the day, we’ll update this blog with new information from the counties as they continue the tally along with other election updates.

(Note: All times are Eastern)

3:30 p.m. | The Washington Post and CNN are reporting that President Trump pressed Gov. Brian Kemp in a phone call this morning for a special session of the Georgia legislature.

The idea has been increasingly pushed by advocates of the president, including before a state Senate Judiciary subcommittee hearing this week.

The idea behind it is that the legislature could re-write Georgia's election laws so that hand-picked slate of Electoral College voters could be chosen to give the state's votes to the president.

The governor reportedly rebuffed Trump on the request. There is no indication that, even if Gov. Kemp were to call such a session, that there is widespread support within the legislature to alter election law in this way.

2:00 p.m. | The Majority Leader in the Georgia House, state Rep. Jon Burns, and others are calling for "a more robust verification process when reviewing signatures on absentee ballot applications and mail-in ballot envelopes by including independent observers" and "additional staffing options to provide more support and oversight for Georgia’s upcoming elections on January 5, 2021."

Sec. of State Brad Raffensperger has proposed doing away with signatures entirely, and requiring a copy of an voter's photo ID when they request an absentee ballot.

12:50 p.m. | By the way, there's still no clear indication from the Secretary of State's Office about when the recount results will be certified. The SoS website has not updated in 20 hours, and Coffee County appears to be the lone county that hasn't certified its recount yet.

The deadline to re-certify was supposed to be yesterday.

12:45 p.m. | Here's another tweet from the governor. As noted in the entry below this, the Secretary of State's Office has said a number of times they're not sure they have a clear legal mechanism by which to order an audit of envelopes.

As I told the President this morning, I’ve publicly called for a signature audit three times (11/20, 11/24, 12/3) to restore confidence in our election process and to ensure that only legal votes are counted in Georgia. #gapol https://t.co/xdXrhf1vI2

12:30 p.m. | Gov. Brian Kemp has responded to yet another tweet directed his way by President Trump:

"During my interview w/ @IngrahamAngle, I re-affirmed support for a signature audit of absentee ballot envelopes, urged action to restore trust in GA elections, & called for conservatives to unite in support of @KLoeffler & @Perduesenate. #gapol," the governor wrote on Twitter.

The president had earlier wrote: "I will easily & quickly win Georgia if Governor @BrianKempGA or the Secretary of State permit a simple signature verification. Has not been done and will show large scale discrepancies. Why are these two “Republicans” saying no? If we win Georgia, everything else falls in place! "

In the event that an audit was done of Georgia's envelopes, there is no way to tie them to the specific votes that were cast, because signatures are only present on the envelopes and there is no identifying information on the ballots. As such, it is not clear how the result of the election itself would be altered.

The Secretary of Sate's Office, for its part, has said it is not clear it has any clear legal mechanism by which to order a signature audit.

The court ruled that Wood's original request for relief - an injunction against Sec. of State Brad Raffensperger from certifying the election results - was now moot, because the results are certified.

"Because Georgia has already certified its results, Wood’s requests to delay certification and commence a new recount are moot," the opinion states.

The court also ruled that Wood did not have standing, writing, "he fails to allege a particularized injury," and that it did not have jurisdiction in the case, writing, "we may not entertain post-election contests about garden-variety issues of vote counting and misconduct that may properly be filed in state courts."

For clarity - this suit was not the same as the so-called "Kraken" suit filed by Sidney Powell in Georgia, to which Wood is a party. This was filed the week after the election. Powell's suit has a hearing in the U.S. District Court for the Northern District of Georgia on Monday at 10 a.m.

It's unclear if Wood will try to further appeal to the Supreme Court.

7:45 a.m. | Good morning! Happy Saturday. The big show is later tonight, but a very important thing to keep an eye out for is Sec. of State Brad Raffensperger making some sort of announcement today about re-certifying Georgia's election results.

The deadline to do that, following the official recount, was yesterday. But there has been no official word and, at least according to the Secretary of State's website, it appears Coffee County is a lone county lagging behind in certifying its results.

It's not yet clear what might be holding them up in Coffee, or when the state will officially re-certify its results.

It's also possible we'll hear updates today on any of the now three significant lawsuits filed in Georgia. The most recent, filed yesterday, was the first to have President Trump himself attached as a plaintiff. That was filed by Ray Smith III, who was involved in the first effort with Lin Wood's lawsuit, with the support of Georgia GOP Chairman David Shafer. It is also the first to be filed in state court instead of federal court.

Our lawsuit does not rely on theories about the voting machines. These theories will be explored in other lawsuits. Instead, we painstakingly show thousands of examples of “low tech” voting irregularities and fraud sufficient in scale to place the election result in doubt. 2/15