Feel like you’re getting a ton of political campaign texts? It’s not just you. Here’s how to stop them.

Because of COVID-19, traditional door knocks are now a no-no, and campaigns are turning to text messaging in a way they never have before to reach voters. 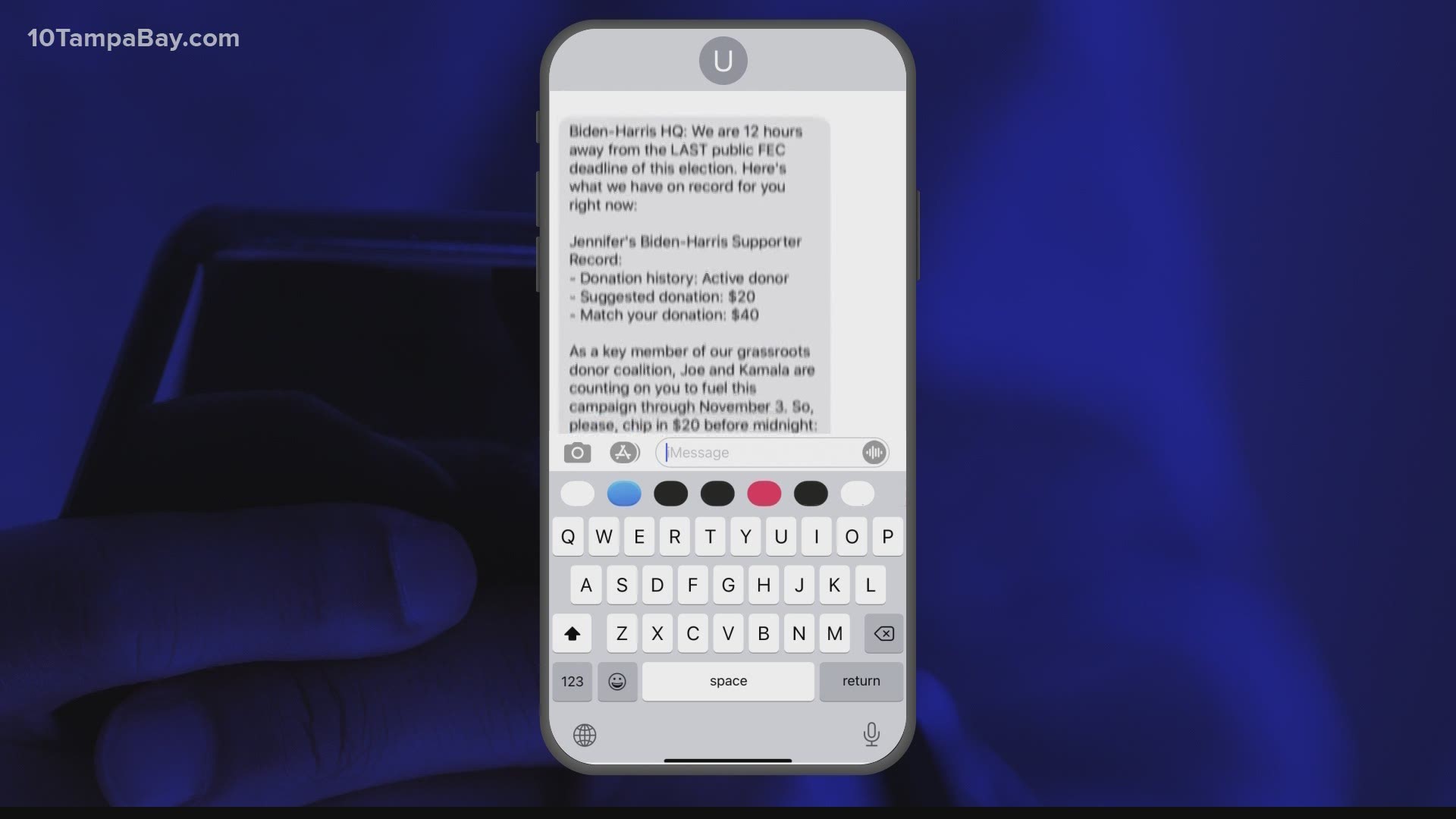 ST. PETERSBURG, Fla. — Chances are you’ve received one, if not several dozen, text messages from a campaign or political group.

Voters are being inundated with these types of messages leading up to the Nov. 3 presidential election.

"In the last week, I can't even find my family's text messages in the barrage of all the political text messages I'm getting,” Jennifer Stromer-Galley said.

Even for her—a professor at Syracuse University in New York and authority on how campaigns utilize digital media—it’s become a bit much.

But Stromer-Galley says it isn’t necessarily a new phenomenon in 2020, it’s just at a new level.

“In 2016 the Trump and the Clinton campaigns definitely used text messaging, and it was used even as far back as 2012,” she said.

“But in 2020 the campaigns have really taken it to another level, and not just the campaigns, it’s the political parties, and even political action groups and activist groups are getting on the bandwagon of text messaging.”

RELATED: Political analyst: Top 3 things presidential candidates must be clear about to win in November

By one estimate, nearly one billion of these political texts were sent to Americans in the month of September, according to app Robokiller.

And your number is easier to get than you might realize, says Stromer-Galley.

“Voter registration information is bought and sold by political organizations all the time,” she said. “If on your registration you included your mobile number, then campaigns and these activist groups can then get a hold of that number to send you text messages.”

FCC rules say campaigns can text you without your permission, but only if they don’t use “auto dialing technology” to do it. Software from companies like Hustle, Opn Sesame and GetThru have made it easier than ever to send a large number of personalized texts in a short amount of time.

RELATED: VERIFY: Can political campaigns legally text you without permission?

Joshua Scacco, association professor of political communications at the University of South Florida says they might feel excessive, but campaigns wouldn’t be sending so many texts if they weren’t effective.

"It is an almost guaranteed way by which a campaign can at least get in front of a voter, for even a split second,” Scacco said.

That split second, says Scacco, can potentially draw someone in to support a specific campaign, or remind them that they have not returned a mail ballot, or encourage them to go vote.

Not only is texting a cheap and easy way to connect with voters—during a pandemic it’s become one of the safest, Scacco said.

“Because of the coronavirus, campaigns have few options to reach voters at this point,” he said.

“It allows for the mass reaching of voters in a very short period of time and that is in some ways one of the most beneficial things for a campaign, even if it means it's very annoying."

You can opt-out of the messages by replying directly to them with the word “STOP.” You can also forward the message to the Spam Reporting Service by typing “SPAM” or “7726.”

TELL US ➡️ How do you feel about getting political text messages? 📲