Who are presidential electors and how are they selected?

Christian Ziegler of Sarasota is one of the 29 presidential electors for the state of Florida. He has a front-row seat to history. 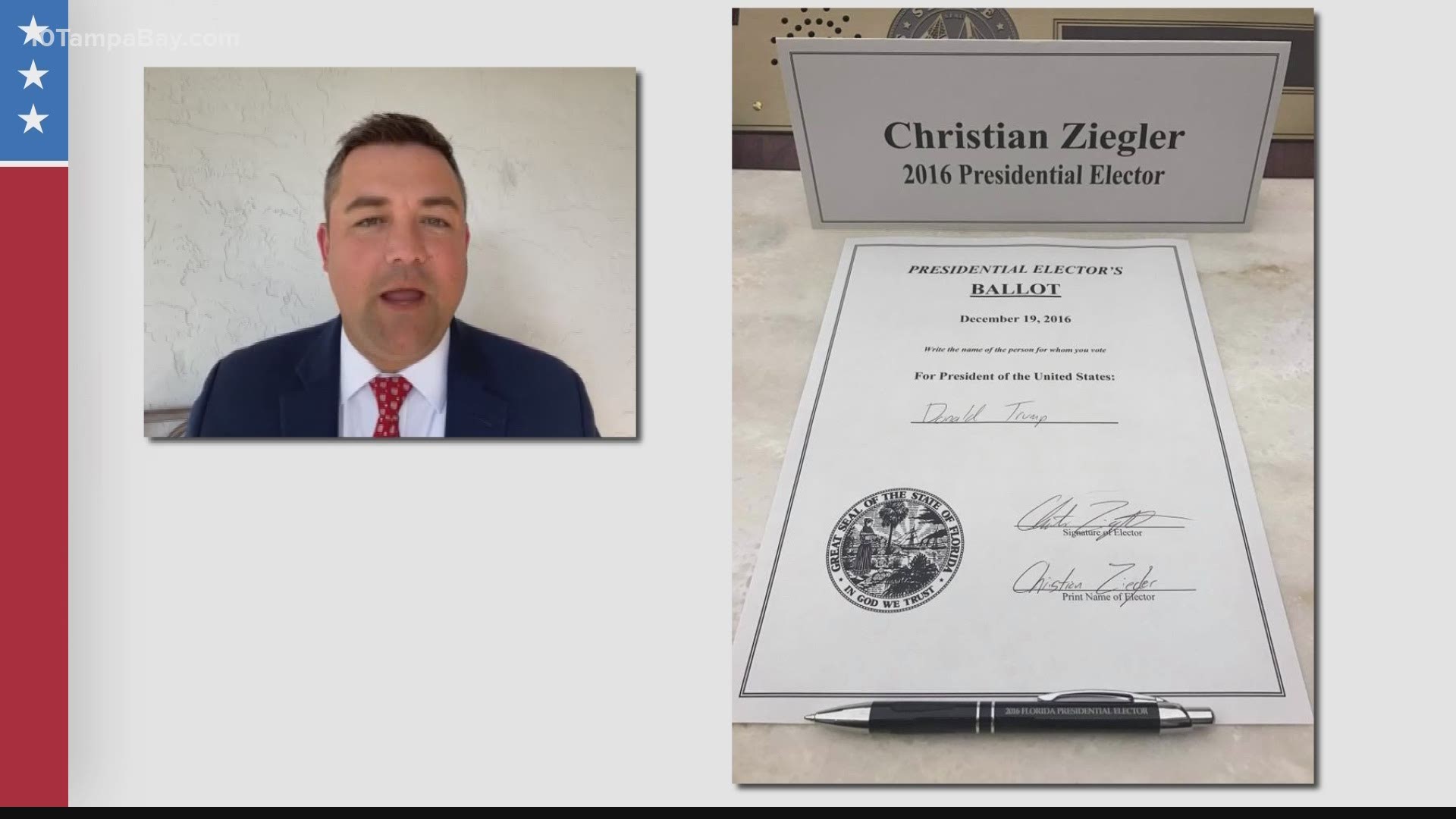 SARASOTA, Fla. — There are 29 presidential electors in Florida -- all selected by the Republican Party of Florida and appointed by Gov. Ron DeSantis.

They'll head to Tallahassee on Dec. 14.

Among the elite group is Sarasota County Commissioner Christian Ziegler. He is also the vice chairman of the Republican Party of Florida.

Ziegler says to become a presidential elector you must contribute in some way, financially or through sweat equity, to Republican efforts to elect the Republican candidate.

“Being part of history, and having that opportunity to have a really, literally a front-row seat to history, like that is great,” he said.

The life-long Republican explained his campaigning during the 2020 general election. He visited 39 out of Florida’s 67 counties.

He says being selected as a presidential elector is recognition of that.

“It recognizes those that have really done the hard work, tried to get the president elected. And in Florida, we were pretty successful. So you know, that's kind of how that process plays out,” he said.

This is not his first time being selected and appointed as a member of the Electoral College. He served as a presidential elector for President Donald Trump and Vice PresidentMike Pence in 2016.

From experience, he shared what happens as the electors convene in Tallahassee.

“All 29 of us are on the floor of the State Senate. We bring a guest. Last time I brought my then 3-year-old, and you know, you sit on the floor and you basically, you have a sheet and you sign it for Donald Trump to cast the electoral votes for all 29, for him. And then you do the same thing for the vice president as well. So, it's really just kind of getting ink on paper,” he said.

Ziegler says 2020 is already a different experience from 2016. He says after the Democrats lost in Florida and nationwide with electoral votes, he was flooded with requests from voters across the country to flip his vote.

He says that if an elector flips or is late to the meeting of the Electoral College, they are replaced. And on Dec.14 as he and the 28 other presidential electors in our state convene in Tallahassee, the historic moment will not be lost on them.

He says he is voting on behalf of the almost 5.7 million Floridians who voted for President Trump.

“This is very important. I mean, there are few political activities more important than the electoral college meeting and casting their electoral votes,” he said.

He says one perk, in addition to being part of history and your name being in the historical records, was attending Trump’s inauguration in 2016 as a member of the electoral college.