It's Welch and Blackmon: Voters to decide next St. Petersburg mayor in November

Since no one garnered more than 50 percent of the vote, the two will appear on the general election ballot in November. 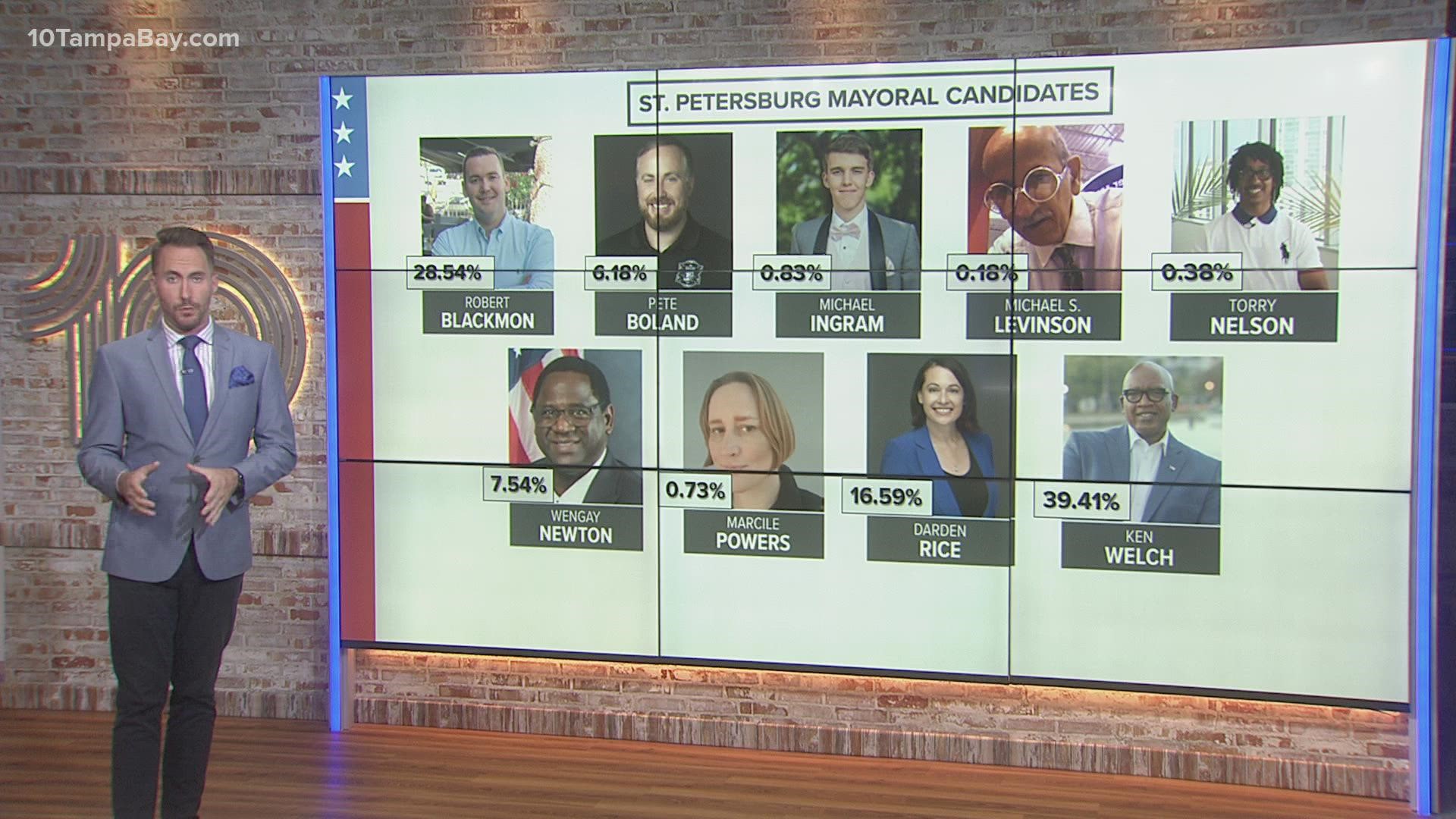 ST. PETERSBURG, Fla. — They'll see you in November: 10 Tampa Bay projects Robert Blackmon and Ken Welch will advance to the general election, vying to become the city's next mayor.

Neither Welch, a former Pinellas County commissioner, nor Blackmon, a city council member, received more than 50 percent of the vote during Tuesday's primary election to replace term-limited Mayor Rick Kriseman.

That means the top two vote-getters will be on the Nov. 2 general election ballot.

Of the 55,000 ballots cast for this race, almost 80 percent voted by mail. That's higher than what we saw in 2017, even with lower overall turnout.

Knowing the turn out will be low, Democrat Ken Welch says his messaging will matter moving forward.

"Off year elections typically have a low turn out and so we're going to have to message as much as we can. Get that out there and connect with voters just as we did in the primary," Welch said Tuesday night.

When asked what he thought about the next few months after the results came out, Republican Robert Blackmon said he'd also focus on messaging, saying the fight won't be easy.

"I was the last person in the race who was really in that top tier. I was outgunned financially by commissioner welch. The point is, just because I didn't have the most money, I'm still there at the end of the day. Ken spent all his money and I spent all of mine, so now we start on a level playing field. This whole campaign begins right now and I'm going to work my tail off," Blackmon said.

There were eight names on the primary ballot, with a blank space left to write in the ninth candidate, Michael Levinson — a packed field to replace Kriseman who could not run for a third term.

Here are the latest unofficial results with all precincts reporting

Outgoing Mayor Rick Krisemen congratulated both Welch and Blackmon on Twitter. He also encouraged all voters in St. Petersburg to remain engaged leading up to the general election.

"Congratulations to the two candidates advancing in this year's mayoral election and to the successful council candidates. Thank you to all who threw their hat in the ring in order to make St. Petersburg an even better and sunnier place to live, work and play. I encourage all voters to remain engaged over the coming months, research the candidates and make well-informed decisions about St. Pete's future," Kriseman wrote.

Who are the two candidates?

A St. Pete native and current city council member, Blackmon is running under the slogan "Giving the Sunshine City 'A Choice and a Voice' in local government."

Blackmon has secured himself several endorsements including that of former Tampa Mayor Dick Greco. Among his top issues are creating a vision for the redevelopment of Tropicana Field, protecting neighborhoods from "excessive redevelopment" and reducing the city's crime rate.

"My time in the campaign has been short. We've shocked the system and we've shown what we can do. You know, we don't need to have things be the same way they've been for 20-22 years. We can have a change," Blackmon said during a Facebook live.

RELATED: Who is Robert Blackmon? The St. Pete city councilor after the mayoral seat

The third-generation St. Pete resident and former county commissioner wants to be a "unifying leader who believes in partnership and working towards a common goal of authentic progress for every neighborhood."

In his run for mayor, Welch is focusing on six principles, including being in touch with the entire city, creating an inclusive space and bringing innovation to St. Pete.

“The voters of St. Pete have spoken & I am deeply honored to be headed into November’s runoff election. Because of you, our campaign is one step closer to the inclusive progress we fight for each day. Thank you for joining me— together, we win," Welch released in a statement.

The voters of St. Pete have spoken & I am deeply honored to be headed into November’s runoff election. Because of you, our campaign is one step closer to the inclusive progress we fight for each and every day. Thank you for joining me — together, we win! #PartnersInProgress pic.twitter.com/1L4ORs8n0I

Outgoing Mayor Rick Kriseman and Pinellas County Sheriff Bob Gualtieri are among those who have endorsed Welch.

Because no candidate received more than 50 percent of the vote in Tuesday's primary election, the top-two vote-getters — Blackmon and Welch — will appear on the municipal general election ballot on Tuesday, Nov. 2.

The winner of that race then will be considered duly elected.